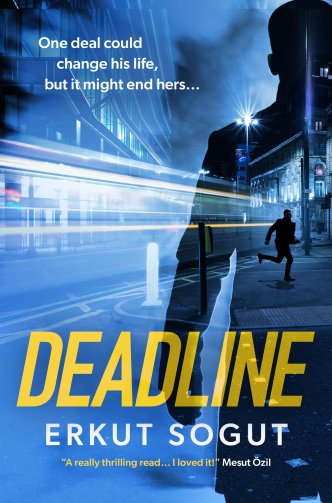 Erkut Sögüt was born in Hanover, Germany and is a player agent, lawyer and lecturer. He holds a doctorate in sports law, is the founder of the Football Agent Institute and wrote the definitive book on agenting: How to Become A Football Agent. He is the founder and director of Family and Football and his clients include Mesut Özil, Kieran Gibbs and Kerem Aktürkoğlu. Erkut has always been passionate about sport and football, and in DEADLINE, his debut novel, he’s married that with his love of thriller writing. He lives in London with his family.
“Soon. There are fresh towels, food in the cupboards. You can stay as long as you like. You know that.”
ABOUT THE AUTHOR“My love, how are you feeling? Did you sleep?” …So she didn’t see the dark figure move behind her, obscured in the condensation that had reformed on the mirror’s surface.A HIGH-OCTANE STORY OF THE WORLD OF FOOTBALL AND THE POWERFUL AGENTS WHO CONTROL IT, DEADLINE IS INSPIRED BY ERKUT SOGUT’S OWN EXPERIENCES AS AN AGENT, AND GIVES A RARE GLIMPSE INTO THIS IMPENETRABLE WORLD. “Morning, dad.” She followed his gaze across the bay. My thanks to Jaime of Ink Editorial for introducing me to Deadline and to providing an extract for the blog tour starting today. Please do check out the other stops on the tour. This looks an interesting one, especially for the football fans! ⚽️

EXTRACT
Joska
Or so he thinks.
Author links:
Joska walked back through to the kitchen placed her espresso cup on the side. She checked her phone, ignoring the several missed calls from her mother and placed it back into her bra.
Twitter | Amazon UK
Remembering the towels, Joska went out to the long corridor that connected the open plan kitchen lounge to the bedrooms and opened the airing cupboard. She felt a breeze on her skin, and it took her a second to realise that her father hadn’t closed the door properly. She walked down the hall, her bare feet cold on the parquet and closed it again, double locking the latch, and picked up her towel as she made her way back to her room. 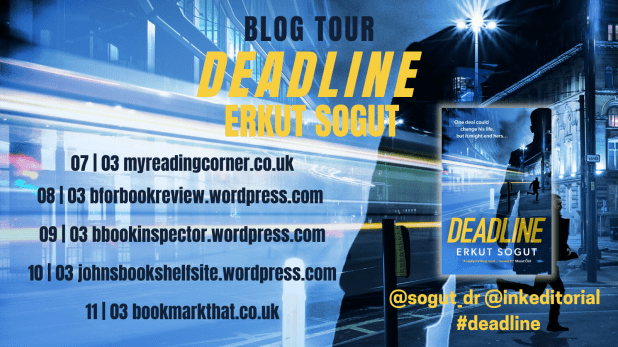 “Say hi to Uncle Marco, aita.”
FROM ONE OF FOOTBALL’S MOST INFLUENTIAL YOUNG AGENTS COMES THE THRILLING DEBUT NOVEL, DEADLINE.
She grabbed his arm and squeezed it around her tightly for a moment, remembering how safe he had always made her feel as a child. A car horn sounded outside, breaking the moment.
Joska landed hard on his chest, but he held on fast. Moments later, she felt her whole body relax and the world around went dark.

Erkut Sögüt, one of football’s most influential agents uses his own experiences to lift the lid on the murky world of football agenting in this exhilarating debut novel.
“I’ll be back tomorrow, maitea. Enjoy the beach.” Ander wheeled his case across the expansive parquet floor, opening the double-width front door and breathing in the fresh air. He was ready.
Publisher: CA Publishing House Ltd
Format: Ebook, Hardback, Paperback (3 March 2022)
Pages: 287
Genre: Suspense Thriller
She moved back to the bedroom to get changed, walking through to the en suite and turning on the shower. As she began to undress, she walked over to her old CD player and switched it on smiling as she picked up the beat of the music and started sashaying around the room, embracing the opportunity to be a kid again. When things were more innocent.
“Eventually. The coffee will help. When do you have to leave?”

Steam was trickling beneath the bathroom door, which Joska opened to a backdraft of vapour. She moved over to the sink and opened the mirrored bathroom cabinet, taking out cotton wool and some make-up remover. One hand wiped the condensation that had formed on the mirror, the other wiped a cotton pad across her eyes, the cooling cucumber micellar water washing away the evidence of last night’s emotional conversations.

A hand reached around her mouth and muffled her scream. A sharp prick and she felt her head go light, her eyelids drooping. She mustered the ounce of strength she’d been left with and pushed back against her attacker, and they slipped on the wet tiled floor.
She didn’t know why her mother had to be the way she was. Why she seemed to want to stand in her way on every last thing. If Joska wanted to study to be a veterinarian then why couldn’t she? It was a world away from her mother’s glamorous brunches and sponsored social media posts. It was a better life, more fulfilling. She had never enjoyed the excesses that her father’s wealth had afforded their family. Even now they were divorced, her mum managed to afford a lavish lifestyle. God knows why her dad still founded it.
As transfer deadline day looms, Ander Anaia is about to make the deal of a lifetime. All that stands in his way is a rival agent.
She closed her eyes and rubbed the cotton wool over them again.