In a nutshell, what is your book about?
How did you come up with the title for your book?
It is an area of Liverpool close to the docks known as Under The Bridge because eyou access it by going under a railway bridge.
https://jackbyrne.home.blog/           My Blog
Buying link – Under The Bridge
Quite privately, If I have my copies I will open the box with my family dedicate a copy to each of  my kids and wife.
As the conflict heightens, Michael questions the life sprawling out ahead of him, while in the present, Anne races to solve the mystery, but is she prepared for what she’ll find?

Is there a book you’d love to see made into a film?
Escaping poverty in Ireland and fresh off the boat, Michael falls in with Wicklow boys Jack Power and Paddy Connolly, who smuggle contraband through the docks, putting them at odds with the unions. While organisers rally the dockworkers against the strikebreakers and rackets. A story of corruption, secret police, and sectarianism slowly unravels. But will the truth out?
I started writing a biography of my dad when I was 16. I think I wrote about half a page before abandoning the project. My dad was a painter and decorator and led  a normal unexceptional life, but he was a part of an exceptional history, tens of thousand of young Irish men and women travelled to the UK to build, not just roads and motorways but lives and families. They and their children, including The Beatles, and Oasis, and many more have had a huge impact on all aspects of UK society.  My books exist in this world and are part of this story.
1955
How did you celebrate publication day?
Under the Bridge
What are you reading just now?
[Fair enough!]
My author in the spotlight today is Liverpool lad Jack Byrne. His novel Under the Bridge was published by Northodox Press last week. Thanks for joining me Jack. First of all, would you tell my blog readers a little about yourself?

WHEN SECRETS RESURFACE THE PAST REACHES OUT…
Finding the identity of a body that is discovered on a building site near the docks in Liverpool.  A young reporter Anne and her friend Vinny become involved in a story  of gangs, smuggling, police corruption and murder. It is also a story that goes back through the 50s, 60s and 70s as they defy threats and violence to uncover the truth.
@Jackbyrnewriter       Twitter
I was born in an Irish catholic family in Liverpool. Liverpool the city of The Beatles and football, is  also a city with a fascinating history at the centre of Britain’s world trade. This also means it was the centre of international culture welcoming sailors from all over the world. This melting pot has created a city of stories, I hope mine add to the legacy.

https://www.facebook.com/groups/522800758257136        Facebook Group for my books
The discovery of a body in the Liverpool docklands unearths long forgotten secrets. Reporter Anne McCarthy is keen to prove herself and dives into the case with abandon. There she finds Michael, an old Irish caretaker who knows far more than he’s letting on and may have a connection to the body.
I think the complete works of Shakespeare,  or if that and the bible are already there, then maybe Lord of The Rings, and I could spend my time musing over  the geography and lineage of all the characters and peoples.
What inspired you to start writing?
What one book would you recommend to a friend and why?
Research for the fourth book, so lots of History.
Vinny Connolly is starting a postgrad degree, researching Liverpool’s migrant history and a burgeoning Scouse identity. But Vinny has been neglecting his own family history and stranger Michael might know about his father’s disappearance in the 70s.
Do you have a work in progress just now?
If you were on Desert Island Discs, what one book would you take with you?
Yes Under the Bridge is one of a series of four books, The Liverpool Mysteries, number 2 and 3 are written, and I am working on number now.
The Ragged Trousered Philanthropists, by Robert Tressell, it changed my view of the world and I hope it can do the same for you.
Tell me about your journey to publication
From the back of the book
2004
How can people follow you or connect with you on social media?
I have written things on and off since those first lines about my dad. I wrote a novel before the days of the internet, but didn’t have the money to copy and send it off to publishers, so it sits on the shelf next to me. The turning point for me was the ability to self publish, that meant I could write and print my own book and so I did. My intention was to spend one year trying to find a publisher or an agent, if I didn’t then I would self publish.  Many rejections later and on the cusp of self publishing my book was picked up by Northodox Press. 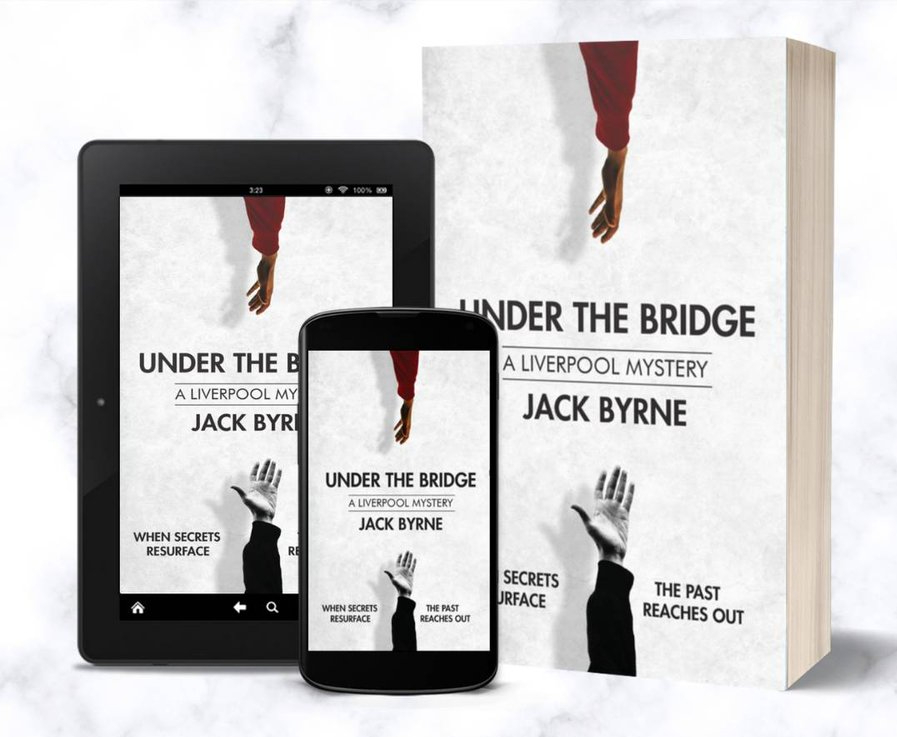