When she reluctantly agrees to look after young Rubi for her next-door neighbour Cassie, Lucy is way out of her comfort zone. When Cassie doesn’t come back after a couple of hours as she promised, Lucy really is floundering and out of her depth. For years, she has lived a very subdued life, happy enough to go to work in a bookshop then come home to her cat, her routines and her small flat. Now she’s going to have to face the real world.
Duckling’s a nickname Lucy has never been able to shake off.
And, if she’s honest, maybe it suits her.
She just isn’t the type to socialise with other people.
You might say she’s reluctant to leave her nest.Duckling has quite a few poignant moments and a fair few worrying ones too. It shows the importance of friendship and kindness and having the courage to stretch your wings. Duckling is a story with a heroine you will be hoping will learn to love herself and live life to the full, a warm and touching book.Lucy’s life is small, but safe. She’s got a good routine. But all that’s about to change…About the book
I’ve read quite a few books recently where an introverted character has come out their shell – or perhaps being brave enough to leave the nest is more appropriate here. What makes Duckling different is the reason that Lucy does just that.
My Thoughts
Now I have to say that I thought it was quite unlikely that Lucy wouldn’t have called the police given the situation she found herself in. But this is fiction, so setting that aside, I found that I was quite caught up in the story and in Lucy and Rubi playing detective. These two were so good for each other and Lucy discovered things about herself that she didn’t know she had in her. She was loyal and brave but so weighed down by guilt. I couldn’t help but feel for her when I found out about her family situation and why she preferred to keep her life so contained and tightly controlled.
It takes courage to let the outside world in, and Lucy’s about to learn there’s much more to life – but only if she’s brave enough to spread her wings…
Eve Ainsworth is a working class award-winning and Carnegie nominated children’s author who has written for both middle grade and teen readers. Duckling is her debut adult novel. Eve has vast experience working as a public speaker and creative workshop coordinator for schools, libraries and other events both nationally and internationally. She also is an experienced mentor and is very passionate about helping those from disadvantaged backgrounds. Eve was born and raised in Crawley, West Sussex and is one of seven children. After her degree, she had a varied background working within HR and Recruitment roles, before moving in a role she loves – mentoring and supporting challenging and vulnerable children in both secondary and primary schools. Eve is fiercely proud of her working class roots and her large, loud family. She still lives in Crawley with her husband, two young children, crazy dog and two very naughty cats.
About the Author

When Lucy’s neighbour asks her to look after her little girl for a couple of hours – and then doesn’t come back – Lucy is suddenly responsible for someone other than herself. 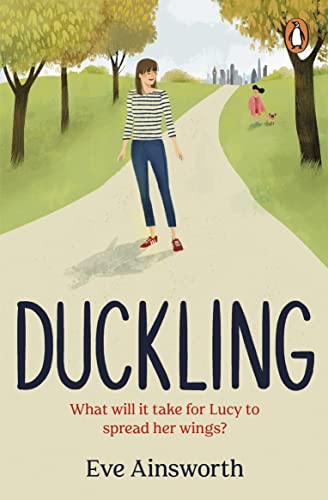