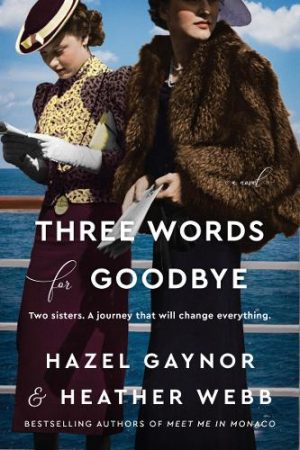 ABOUT THE BOOK
Three cities. Two sisters. One chance to correct the past.My thanks to Anne Cater of Random Things Tours for the tour invite and the publisher for the opportunity to review. I’ve read Hazel’s books before The Girl Who Came Home (2014), A Memory of Violets (2015) and have bought all her other books, which to my shame are still on my TBR pile. Hazel Gaynor’s and Heather Webb’s first collaboration Last Christmas in Paris (2017) was a wonderful read and I was thrilled when the opportunity arose to review Three Words for Goodbye as both authors writing together are a fabulous combination.FOLLOW HEATHER WEBBConstantly at odds with each other as they explore the luxurious Queen Mary, the Orient Express, and the sights of Paris and Venice, Clara and Madeleine wonder if they can fulfil Violet’s wish, until a shocking truth about their family brings them closer together. But as they reach Vienna to deliver the final letter, old grudges threaten their reconciliation again. As political tensions rise, and Europe feels increasingly volatile, the pair are glad to head home on the Hindenburg, where fate will play its hand in the final stage of their journey.HEATHER WEBB is the USA Today bestselling, award-winning author of The Next Ship Home, Rodin’s Lover, Becoming Josephine, and The Phantom’s Apprentice, as well as two novels co- written with Hazel, Last Christmas in Paris , which won the 2018 Women’s Fiction Writers Association Star Award, and Meet Me in Monaco, a finalist in the 2020 RNA Awards as well as the 2019 Digital Book World Fiction awards. To date, Heather’s works have been translated into fifteen languages worldwide. She is also passionate about helping writers find their voice as a professional freelance editor, speaker, and adjunct in the MFA in Writing program at Drexeul University. She lives in New England with her family and one feisty bunny.

FOLLOW HAZEL GAYNOR
Publisher: William Morrow / Harper360
Format: Ebook, Hardcover, Audio 27 July | Paperback 2 September 2021
Pages: 400
Source: Copy received for review
I thoroughly enjoyed this and it ticked so many boxes for me – a superbly written story with engaging characters, travel and a plot that has light and shade. Even though the sisters had a sad task to carry out for Violet, they had time for sightseeing and there was a little armchair travelling as they took in the sights of Paris and Venice. I have always wanted to travel on the Orient Express and I loved reading about their journey on this iconic train. The uncertainty with the political background gave the story some bite and there were some shocking events witnessed. When it was time for them to return home, it was clear they each had grown in character and confidence but despite their differences, their sisterly bond would never be broken. Definitely recommended for fans of historical fiction.
It was always going to be difficult, expecting two very different personalties to get along, especially on a trip that would last a few months. As expected, they clashed repeatedly however they were both united in trying to fulfil their grandmother’s last wishes and this led to some very poignant and also dangerous moments, as parts of Europe at that time were under threat by the Nazi’s.
Sisters Clara and Madeleine Sommers couldn’t be more different in personality. They are also estranged. Clara is the more restrained of the two, aware not only of her family background but also of her position as the fiancee of a wealthy businessman whilst aspiring journalist Maddie has a more impulsive and casual approach to life and is a risk taker, being inspired by family friend and famous reporter Nellie Bly. Their grandmother, in the last few months of her life, dearly wants the two young women to be reunited and wants them to undertake a task journeying across Europe to deliver 3 letters – her last words to people from her past when she herself took a similar journey with her sister 40 years earlier.
Hazel Gaynor and Heather Webb have reunited for the third time with another unforgettable historical novel following their award-winning bestseller Meet Me in Monaco. In THREE WORDS FOR GOODBYE, estranged sisters Clara and Madeleine Sommers take a journey across Europe inspired by Nellie Bly, one of the first investigative journalists, who set out to circumnavigate the globe in less than eighty days.

New York, 1937: When estranged sisters Clara and Madeleine Sommers learn their grandmother is dying, they agree to fulfil her last wish: to travel across Europe—together. They are to deliver three letters, in which Violet will say goodbye to those she hasn’t seen since traveling to Europe forty years earlier; a journey inspired by famed reporter, Nellie Bly. Clara, ever-dutiful, sees the trip as an inconvenient detour before her wedding to millionaire Charles Hancock, but it’s also a chance to embrace her love of art. Budding journalist Madeleine relishes the opportunity to develop her ambitions to report on the growing threat of Hitler’s Nazi party and Mussolini’s control in Italy.

Perfect for fans of Jennifer Robson, Beatriz Williams, and Kate Quinn, Gaynor and Webb have written a meticulously researched narrative filled with colourful scenes of Europe and a stunning sense of the period. This unstoppable historical fiction author duo will have readers enthralled as the sisters explore the luxurious Queen Mary and ride the long-haul rail to take in the sights of Paris and Venice.

Told in alternate chapters by Maddie and Clara with the occasional interruption from Violet, Three Words for Goodbye explores how families can be torn apart, there are also secrets, all combined some with luxury travel on the Queen Mary cruise ship as it sails from the US to France and then on the Orient Express to Venice and finally across country to Austria before returning home on the ill-fated Hindenburg. Along the way the two sisters learn some unexpected truths both about their family but also about themselves and what they really want from their lives. Clara, a talented artist captures memories of their journey with pictures whilst Maddie uses words by keeping a journal. HAZEL GAYNOR is the New York Times and USA Today bestselling author of When We Were Young & Brave, A Memory of Violets and The Girl Who Came Home, for which she received the 2015 Romantic Novelists’ Association Historical Romantic Novel of the Year award. Her third novel, The Girl from The Savoy, was an Irish Times and Globe and Mail bestseller, and was shortlisted for the Irish Book Awards Popular Fiction Book of the Year. In 2017, she published The Cottingley Secret and Last Christmas in Paris (co-written with Heather Webb). Both novels hit bestseller lists, and Last Christmas in Paris won the 2018 Women’s Fiction Writers Association Star Award. Hazel’s novel, The Lighthouse Keeper’s Daughter, hit the Irish Times bestseller list for five consecutive weeks. Hazel was selected by Library Journal as one of Ten Big Breakout Authors for 2015. Her work has been translated into fourteen languages and is published in twenty-one countries worldwide. She lives in Ireland with her husband and two children.
ABOUT THE AUTHORS