Mark has kindly written a guest post about fictional characters.
I’m going to use Paul Hanson from my own novel, Feral Snow, as an example.
We’re a complex construct of experiences. We’re nurtured into being the way we are. And Paul has one scene in his life, which defines his very being: he’s beaten by his father with a fire poker rendering him unilaterally deaf. His father has shaped everything about Paul. He’s instilled a fear of failure and rejection in him that makes him withdrawn and fearful of becoming a father himself. His dad mocked and was angered by the knock-on effects of Paul’s deafness resulting in Paul doing everything he could to hide it. This is an experience we empathise with. We all have negative experiences (although perhaps not as violent or evil), experiences of self-doubt, and something we want to hide from the rest of the world. It’s a very thick layer I’ve slapped on here. But it’s necessary because it makes us feel not only pity for Paul but now we’re on his side. We’re beginning to understand why he is the way he is. And his arc is amazing.
‘Ogres are like onions…’ (Shrek, 2001). I often think about this quote when dealing with fiction. Why? Not only because it’s from one of the greatest movies of all time, but also because it’s so true. Every main character of fiction is flawed in some way. Perfect characters make for awful reading. Why? Because we have flaws. Humans are flawed beings. No one is perfect, but the deeper you go into the dark recesses of fiction – the crime, the psychological thriller, the horror – the more layers your ogre will have. Some of the greatest, most complicated characters are the most layered. But what counts as a layer and how do you construct an endearing, complicated ogre? That’s the challenge we all face.
All my characters have as many layers as I can manage: Marie has a history of homophobia in her family despite being a lesbian herself. Curly despises Paul’s aloof attitude to the Arctic because he’s made mistakes in the wilderness before. Nanny is full of love despite her tough exterior because of the close relationships she has with her parents.
Some brilliant, complex, layered characters can be found in We Begin at the End by Chris Whitaker, My Absolute Darling by Gabriel Tallent, and A Song of Fire and Ice by George RR Martin.
But when a young native girl falls into the chasm with him, a race against time ensues. Will Paul get home to his pregnant wife? Will he save the girl who fell in with him? Will the freezing Arctic consume him?
Paul Hanson is a father-to-be and future dead-beat dad; traumatised by his past, he’s terrified of becoming a father after his own beat him until he was unilaterally deaf. While working as a freelance cameraman in the Arctic, he’s caught in a blizzard, separated from his crew, and falls into a chasm.
Mark Lowes is the author of Feral Snow which was published on 1 October 2020.
How far will you go to save yourself? 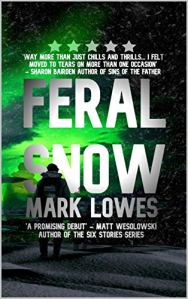 Every layer you add to your character has to be there for a reason. Every layer is an influence on who the character is and why they behave the way they do. Jay Gatsby is driven by his impoverished background to become the most celebrated and loved person in his world. Jack Torrence is driven by alcoholism, imparted by his own father when he was young leading to him rebelling against his wife and lured by the Overlook who tricks him with praise. Amy in Gone Girl is driven by being exploited her parents and then Nick as an adult to frame her husband for her murder. These draw us into these characters, despite the them doing some pretty horrendous things.
Ultimately, as writers, we’re constructing these ogres for the sole purpose of making our readers empathise with them. If we can do that, we’ve struck gold. For me, characters are what drives a story forward. They’re what keeps us going back to the page. The plot is secondary. Important. But secondary. It’s the characters we’re invested in.
Paul must learn how to accept responsibility and what it takes to give your life for a child.
On the surface, Paul can come across as somewhat of a divisive character. From his first moment on the page, he’s moody, withdrawn, and clearly troubled. He’s someone you wouldn’t necessarily root for, especially after hearing he’s abandoned his pregnant wife to give birth alone. But as his story and the journey unravels, we end up understanding why he is the way he is and we’re on his side throughout his isolation in the Arctic until the very end.
Alone, and waiting for death to come, the demons of his past plague his mind.
Even Hannibal Lecter (the greatest fictional villain of all time) is shaped by a horrific experience in his life: the cannibalism of his young sister when he was a child in war-torn Lithuania. This is something we can empathise with. This leads to Hannibal’s fierce protection over Starling who becomes a substitute for his sister—a trait we’re drawn to.
On top of this thick layer, which is the inner most shell covering Paul’s core, are memories of him seeing his dad dressed up as Santa on Christmas Eve, his dad dragging his mum around by her hair, Paul meeting his wife, and Paul running away to the Arctic, and many more. As you can see, these are only a few examples but they’re a strong mix of emotions—both positive and negative. These are peppered with highs and lows, sadness, humour and desperation in the present. His emotional scale is stretched beyond belief and we’re on this scale with him from start to finish.
About the Book
Characters are like onions…