Cara Hunter has once again produced a brilliant crime thriller/police procedural which kept me glued to the page. I do hope more Fawley is on the way, especially as some possible future developments were hinted at for him. Hope to Die is intelligent and exciting with a complex case at its heart and regular characters that I love to read about. I loved it.

Hope to Die by Cara Hunter is published by Penguin Viking in paperback, eBook and audiobook.

Suddenly Fawley’s team are under more scrutiny than ever before. And when you dig up the past, you’re sure to find a few skeletons…
Plot aside, I always know I’m onto a winner with these books because of the characters. I love Adam Fawley and was pleased to see his home life on more of an even keel this time round. His team are just as important to the story though and I enjoyed the dynamics between them all, old and new. What I also really enjoy is the format with a mixture of news reports, websites, police interviews, and in this case a transcript of a Netflix series, being woven into the narrative. It makes it so much more interesting and fast-paced, offering different ways to view the investigation.
The sixth twisty, up-all-night thriller from the Sunday Times bestselling Cara Hunter. For fans of Shari Lapena, Claire Douglas and Lisa Jewell.

It looks like a burglary gone wrong, but DI Adam Fawley suspects there’s something more to it.

Cara Hunter is the author of the Sunday Times bestselling crime novels Close to Home, In the Dark, No Way Out, All the Rage and The Whole Truth all featuring DI Adam Fawley and his Oxford-based police team. Close to Home was a Richard and Judy Book Club pick and was shortlisted for Crime Book of the Year in the British Book Awards 2019. No Way Out was selected by the Sunday Times as one of the 100 best crime novels since 1945. And The Whole Truth was a Richard and Judy pick in 2021. Cara’s novels have sold more than a million copies worldwide, and the TV rights to the series have now been acquired by the Fremantle group. She lives in Oxford, on a street not unlike those featured in her books.
When the police discover a connection to a high-profile case from years ago, involving a child’s murder and an alleged miscarriage of justice, the press go wild. 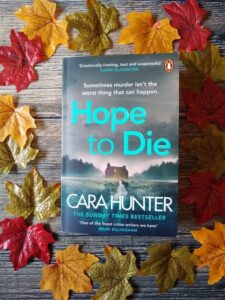 Hope to Die is the sixth outing for DI Adam Fawley and this series has become a must-read series for me. Initially a clear-cut case of a burglary at a remote property, it soon becomes clear that there’s a lot more to it than first seemed and the case appears to be linked to a previous case in which a woman was convicted for killing a child. It’s a fascinating plot which kept delivering curveball after curveball.