Source – review copy
The only question which hangs over the life of Sir Richard Wyndham, notable whip, dandy and Corinthian, is one of marriage.
Publication date – 7 October 2004
An entertaining Georgian era set comedy of errors and romance, with two characters that have much to recommend them. I very much enjoyed spending time in Richard and Penelope’s world for a few hundred pages.  Luckily I have lots more Heyer books to get through, the perks of discovering an author with an extensive back catalogue.
This is fun from the outset. The characters are either delightfully annoying and condescending or enjoyably wilful and refusing to be curtailed by what is expected of them. The author gently pokes fun at the age, at what society controlled or deemed worthy of notice. There are comments on the latest fashions, of marriage being reflecting your place in the ranks and not about love, and that love is a whimsy that few can afford or expect.
What follows is a shockingly perilous advantage – one which might just provide Sir Richard with his own opportunity to escape . . .
Richard Wyndham has realised he is being increasingly pressured into marriage. Unfortunately he does not love the woman picked out for him. One night after a few too many drinks at his club, he comes across Penelope, escaping from an upper window. Still drunk he decides to help her in her hairbrained scheme to track down her childhood friend, who she intends to marry. But run ins with  thieves, aunts and Bow Street Runners means things don’t go exactly to plan.
It is clear that the author enjoyed writing this tale of mishaps and misunderstanding. It was lovely to get caught up in the escapades of Penelope and Richard. Whilst the ending may have been inevitable, the pleasure was watching the pair journey to that final conclusion together. 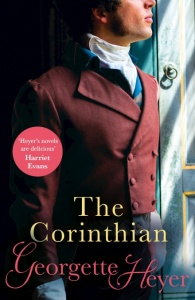 Richard doesn’t take things too seriously, or at least doesn’t appear to. Used to getting his own way, and being the talk of the Ton, he is known as a dandy and a fashion icon, esteemed as much as the famous Beau Brummell. He appears to be going along with Pen’s plans for no reason other than his own entertainment. However he is cleverly keeping an eye on her without her realising, directing her the safer path and reining in any overtly fanciful ideas.  Richard is on the face of it a vain and untroubled young man about town, used to pursuing his own pleasures. Pen is more modern than the morals of the time would like, naively blind to any possible corruption of her social standing. She is rebelling against the presumed role she has to play, that of a wife married to a man she does not love. It is clear that Pen has no clue that her fanciful plan will fail or that she has done anything to bring into question her virtue. She sees only that she has to avoid marriage to her cousin. Though they seemingly have little in common. both Richard and Pen are trying to avoid the pre-destined path society has set for them.
Wyndham is contemplating his upcoming proposal with considerable dismay, when he chances upon a beautiful young fugitive, Penelope, making a dramatic exit from her home. Impressed, intrigued, and a little worse for drink, he decides to help Penelope flee.
Published by Arrow