This is the confession of Laurence Jago. Clerk. Gentleman. Reluctant spy.
An immersive and tense visit to a past that comes alive on the page. I loved it.
Blame for the leak is shifted to the dead man, but even as the body is taken to the anatomists, Laurence is certain both of his friend’s innocence, and that he was murdered. But after years of hiding his own secrets from his powerful employers, and at a time when even the slightest hint of treason can lead to the gallows, how can Laurence find the true culprit without incriminating himself? 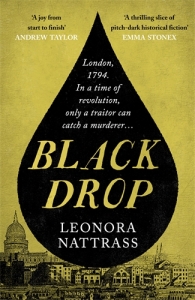 Laurence Jago is a clerk in Westminster, spending his days copying treaties and missives only a stones throw away from Number 10. He spends his evenings alone in his rooms with his dog Mr Gibbs, reliant on the black drop, or opium to send him to sleep. When a fellow clerk is found dead and a leaked letter published in the newspapers, threatening the stability of England in it’s war with France. Laurence is determined to find out the true cause of his friend’s death. But Laurence has his own secrets to keep, ones that threaten to surface, and which could lead to him the gallows himself.
Narrated by Laurence Jago, the reader is soon aware that he has secrets of his own. Unwittingly turned into a spy for France, he works as a government scribe, both desperate not to be noticed but having ambition enough to want to better himself so he can win the hand of his employer’s step daughter Anne.
Publication date – 14 October 2021
Laurence Jago – clerk to the Foreign Office – is ever more reliant on the Black Drop to ease his nightmares. A highly sensitive letter has been leaked to the press, which may lead to the destruction of the British Army, and Laurence is a suspect. Then he discovers the body of a fellow clerk, supposedly a suicide.
Published by Viper Books
I am hoping that Leonora Nattrass brings us more tales of Laurence Jago and William Philpott. The pair were a delight to read, and I look forward to reading more from the author in the future.
Black Drop is filled with real figures from the past, with fact and fiction intertwined. There are familiar names such as Mr Pitt, the Prime Minister, and ones which may be new to the reader. There is a hand list of characters at the beginning of the book, though they are all portrayed so well that the reader doesn’t have difficulty in distinguishing them.
Source – review copy
I love a good historical crime novel. A visit back into the past when murders take place in dark alleys, deaths can be covered up to look like accidents or illness and where the truth has to be found out using wiles, guess work and pure luck. Fortunately Black Drop is a great historical crime novel.
Laurence is a a complex character, despite or perhaps because of his self loathing at becoming embroiled as a spy. He is ultimately honest, wanted to see justice for his friend’s death, aware of his cowardice at not revealing what he knows as that would expose his secret. William Philpott, Laurence’s friend, neighbour and local journalist, is a wonderful character. Forthright, no nonsense but kind, he takes Laurence under his wing without the young clerk even realising it. He is the solid, dependent person Laurence didn’t know he needed. There are, of course, more unlikeable characters, those that want to use Laurence to meet their own ends. There are machinations in government that need to be turned by people will flexible morals. Those too are vividly imagined and easy to conjure in mind’s eye.
Recommended.
July 1794, and the streets of London are filled with rumours of revolution. Political radical Thomas Hardy is to go on trial for treason, the war against the French is not going in Britain’s favour, and negotiations with the independent American colonies are on a knife edge.
It is obvious that a lot of work went into researching the characters portrayed, and the time in history when Black Drop is set. That shows in the writing. The reader is transported to the heaving streets of Georgian London. The sights, the poverty, the cramped dwellings, filth and pestilence come to life.