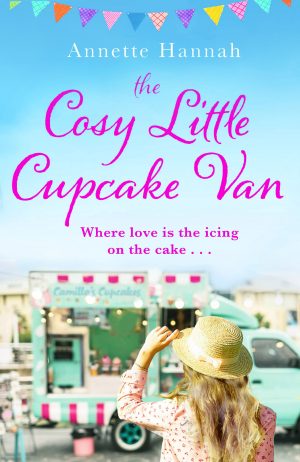 Although some characters return from the previous book, this can easily be read on its own. In fact I enjoyed this so much, I now want to fit in Wedding Bells as soon as I can. Camilla is a hugely likeable and engaging character who doesn’t deserve the things that happen to her – oh how I wanted karma to intervene! but instead of sinking, she slowly picks herself up and with the aid of a gifted renovated ice cream van she names Cora, it’s cupcakes away as her delivery service begins.Camilla should have been riding high. She was at a beautiful French chateau, having reached the final challenge of a Wedding Cakeathon and doing well. However life interrupts her happiness and she receives the most dreadful news.
GUEST POSTThank you so much Karen for having me on your lovely blog.

Once I’d finished writing the book which actually felt similar to giving birth in a weird way, I sent it out to a few more publishers and eventually received a few rejections. I decided to be really grown up about rejections and took on board any precious feedback that I received, including that from the lovely Sara-Jade Virtue at Simon and Schuster. I wanted to show my children that rejection was part and parcel of fulfilling my dream as a writer. Rather than sit around and wait I decided to embark on another book idea I had and this time I finished the whole thing before submitting to the #OneDay initiative. I did this for four years and after each rejection I would reach out to other publishers and agents but to no avail. Then my third book began to garner some interest and Simon and Schuster requested the full manuscript and I really was a bag of nerves then, they did eventually reject it but it was a lovely rejection that boosted my confidence and I knew I was heading in the right direction.
Thankfully her friends are always there for her, and when she is given an old ice cream van, Camilla’s dream of a cupcake delivery service is born. Now she can bring happiness – and buttercream frosting – to the whole town. But when her ex Blake appears back on her doorstep, Camilla must decide if she can trust him again or if her heart might belong to someone else…
A huge part of the book were about the cupcakes and these were a showstopper. I love cake BUT I was drooling reading this. The cooking smells and flavour combinations came through the pages – and it wasn’t just cake that made my mouth water. Bruschetta, lasagne…. Don’t read this if you’re hungry!
MY THOUGHTSShe worked in Marketing for many years as a qualified Marketeer which she loved as it tapped into her creative side. As an avid reader, she began to review the books she read, became a book blogger and eventually plucked up the courage to fulfil her lifelong dream of writing a book. For four years she was a member of the Romantic Novelists’ Association’s new writers’ scheme, during which time she wrote a book a year. After signing a two book deal with Orion Dash in 2020 she graduated to full member of the organisation and is also their Press Officer.
Bursting with romance and sprinkled with humour, this is a deliciously feel-good story about one woman putting her life back together, one cupcake at a time.
There was so much I enjoyed about this gorgeous and warmhearted story full of community spirit and kindness. Camilla was broken hearted by the loss of her mum but support came from the superbly drawn surrounding characters – her best friend Lucy, Ron, Blake, Irishman Ged – and neighbour Auntie Edie! I loved Edie – she said what she thought without holding back but provided the wisdom and oft home truths that Camilla needed. Whilst the story had plenty of humour and romance, it also included a more serious narrative involving those in need of extra support and help.
Once Camilla got her wheels and her confidence there was no stopping her. Her cupcakes were a success, she was gradually getting her life back on track but then – Blake returns. The gorgeous Canadian who was the love of her life and who broke her heart all those years ago. Is he now going to break it all over again.
She loves long walks along the river, travelling to far flung places and spending time with her friends and family.

ABOUT THE AUTHOR
Annette Hannah is a Liver Bird who relocated to leafy Hertfordshire in the 80’s and now lives near a river with her husband, two of their three grown up children and a crazy black cocker spaniel. She writes Romantic comedies in settings inspired by the beautiful countryside around her and always with a nod to her hometown.
Eventually I sent it to Orion Dash Digital, a new imprint which I’d heard about at the Romantic Novelists’ Association’s annual conference and in January 2020 I was asked if it was still available as they were reading it with interest. I was on holiday in Singapore at the time and couldn’t quite believe it. I didn’t hear any more until April when I was offered a two book deal. I burst out crying when I read the email and my poor daughter thought something terrible must have happened. My dream had come true and on July 6th after a whirlwind couple of months and lots of editing during lockdown, my third book Wedding Bells at the Signal Box Café became my first published novel and my lifelong dream of becoming a published author came true. It’s hard to believe that the fourth book I’ve written, The Cosy Little Cupcake Van has now become my second published novel and all in less than a year. So, I guess my first piece of advice is as soon as you’ve submitted your book somewhere make sure you start the next one, it’s a great distraction and when you are offered a book deal you will have some manuscripts under your belt to offer. Secondly never give up and thirdly as the saying goes if at first you don’t succeed try, try again, it worked for me.
Six months later, life doesn’t get any better. Cheated and heartbroken, Camilla has nothing. She is at rock bottom and it is only the kindness of friends keeping her afloat.
Author Links:
Website | Twitter | Facebook | Blog | Instagram | Goodreads | Amazon UK
I began writing seriously about five years ago after wanting to do so for as long as I can remember. I heard about Simon and Schuster’s #OneDay #DigitalOriginals where they needed the first five thousand words and a synopsis. I’d had an idea in my head for a little while and so plucked up the courage to submit. After I sent in those few words I felt as though I was parading around naked in front of everyone as I’d never shared my writing before. It was a nerve wracking wait, especially when I realised that if they liked it then I would need to come up with another seventy five thousand words pronto. That shook me into panic writing the rest of the book which seemed to burst out of me in less than a month, some days I wrote 500 words and some a couple of thousand, my record was 8000 words in one day which I’ve never managed since.
I’m delighted to be taking part and closing the blog tour for Annette’s second book published by Orion Dash. I wasn’t able to read the first, Wedding Bells at the Signal Box Cafe, when it toured, although I did buy my own copy – you can read a guest post from Annette here where she talked about the authors who had shaped her life. I have however read The Cosy Little Cupcake Van and have my thoughts below alongside another fabulous guest post from Annette.

Camilla’s delicious cakes are the talk of her village. If you need a perfectly iced mouthful of joy, Camilla “Cupcake” is your woman. But after losing her mother, she finds her home and her business in jeopardy. She needs a little helping hand…

Third Time Lucky
A deliciously feelgood romance, perfect for fans of Cathy Bramley, Ali McNamara and Rebecca Raisin!
Annette x x x
The Cosy Little Cupcake Van is a wonderfully uplifting and comforting read, written by a very talented author. A story about the importance of friendship, finding your confidence and self worth and the reminder that happiness is more than just possessions. I loved it, even if it did make me cry. That was a purely personal reaction to one song mentioned near the end. Because I chose that very same song in the same circumstances and it bought back memories.