So the Man Booker Prize 2018 longlist has been announced. It has seemed strange in the last few years that I haven’t done a ‘guessing the longlist’ post or video, as since I started Savidge Reads in any form I have always followed the prize and then the Man Booker International Prize. When I first started reading again in my twenties (after the six years where I didn’t pick up a book, imagine) the Booker was a signpost for me of some great reads that I should really head to. Over the last few years however the love has waned somewhat. I’ve felt a little like it had lost its way somewhat. I actually talk about it in a video I will embed below, don’t worry I won’t be sharing all my videos, I know some people prefer one medium to the other, its just so I can add/be a little bit extra, ha.
What do I think of the list? Well firstly I was shocked that I had read one (The Water Cure, review coming in due course) and had all of them on my  shelves with the exception of Warlight, The Long Take and Sabrina, the latter of which I have already bought and rectified. Secondly, I think this is a really fresh (and much needed) list. It is by no means the perfect list, but when are they? I would have liked some more books from other commonwealth areas like Africa, India and Australia etc. Yet at the same time I love the fact that the list has so many women on it, there is some younger and lesser known talent and with a crime novel and a graphic novel a slight feel of excitement and change. I talk more about that below.
[embedded content]

So those are my initial thoughts. Am I going to read the whole longlist? Not intentionally, no. That said I am about to start The Mars Room as a buddy read with my pal Mercedes. I am super duper keen to read Washington Black, Everything Under, Snap and Milkman for definite. Then I think I will see what takes my whimish moods, which is the best way to read anything full stop. What are your thoughts? Do you like the list? What is missing, if anything? Let’s have a natter in the comments below.
So here is the longlist… 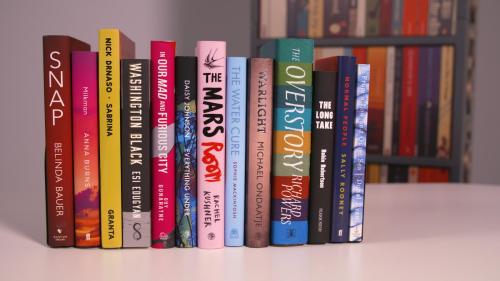