Good luck!
Well Birdy Finch didn’t just imagine it. She did it. Which might’ve been an error. And the life she’s run into? Her best friend, Heather’s.
If would like the chance to win a copy simply comment below to have your name put into the hat.
*I am paying for this giveaway and have not received any payment for doing so. I have however received a copy of the book for review purposes. Giveaway is open to UK resident only and closes at 11.59 pm Thursday 29 April 2021. No cash alternatives and I don’t take responsibility for the book getting lost in the post*
Today I have a copy of the book to giveaway but before I do, here’s a little bit more about the book
And can she stop herself from falling for the first man she’s ever actually liked (but who thinks she’s someone else)
Lizzy mis)spent her early twenties working in Scotland in hospitality, in a hotel not unlike the one Birdy finds herself in. She then found herself working in the Television industry travelling the world creating content for various TV companies, including MTV, Channel 4, the BBC and ITV.  After publishing three young adult novels, she decided to write a novel that reflected the real women she knew, who don’t always know where they’re going in life, but who always have fun doing it which is how The Summer Job came to be.
Can Birdy carry off a summer at a luxury Scottish hotel pretending to be her best friend (who incidentally is a world-class wine expert)?
Have you ever imagined running away from your life?
The only problem is, she hasn’t told Heather. Actually there are a few other problems…
The Summer Job is the debut adult novel by Lizzy Dent and was published by Viking on 15 April 2021. It has had TV rights optioned and will be coming to our screens as a TV series. 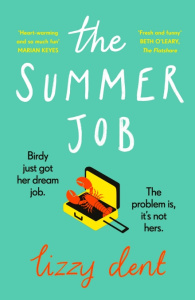