The Book Share is published by HQ and available now in ebook, audiobook and paperback.
My thanks to the publishers for my review copy of the book from Netgalley.
About the book
Brimming with joy and packed with a sparkling cast of characters, The Book Share is a moving reminder that it’s never too late to re-write your own story – perfect for fans of All the Lonely People and The Authenticity Project.
It’s never too late to start a new chapter…
The utterly charming and feel-good new novel from the bestselling author of The Secrets of Sunshine and The Library of Lost and Found.
You can find/follow Phaedra at http://www.phaedra-patrick.com where she shares more information and writing tips. She’s also on Facebook, Twitter and Instagram.
I have to admit this one took a little while to grow on me but suddenly I realised that I was totally invested in Liv’s story, desperately hoping she’d find her own happy ending. I loved watching her blossom and grow in self confidence throughout the book. Phaedra Patrick writes about quirky characters with such an engaging style that it’s easy to just fly through the pages of her books. The Book Share is a hopeful story about fresh starts, a charming feel-good read.
Phaedra Patrick studied art and marketing and has worked as a stained glass artist, film festival organiser and communications manager. An award-winning short story writer, she now writes full time in Saddleworth where she lives with her family.

Essie was a bit of a strange character and difficult to warm to initially. Although she’s not in the book for very long, her influence pervades the whole story. She appeared so aloof and standoffish to most people (not like any author I’ve met before), and was perhaps a little eccentric. Yet, she didn’t look down on anyone and always treated people with respect. It seemed to me that there was something which had happened in her past which had made her like this and I was eager to find out.
I was so excited to find that Phaedra Patrick had a new book coming out as I have loved all her books I have read – The Curious Charms of Arthur Pepper, The Library of Lost and Found and The Secrets of Sunshine. With this novel having books at its heart, I was sure I would enjoy this one too and I was right!
About the Author
Liv Green loves losing herself in a good book. But her everyday reality is less romantic, cleaning houses for people who barely give her the time of day. So when she lands a job housekeeping for her personal hero and mega-bestselling author Essie Starling, she can’t believe her luck.
Although being a cleaner wasn’t what Liv had wanted to do – she had wanted to go to university – she was someone who took great pride in her work, even making her own natural cleaning products. I hated the way others seemed to look down on her or take advantage thinking a cleaner was a very lowly job. Working for Essie was a dream job for Liv though, as she was a massive fan of her writing and knew all her Georgia Rory books inside out. Essie always saw something a bit more then ‘just a cleaner’ and gave Liv the chance to prove it.

Her debut novel, The Curious Charms of Arthur Pepper, was translated into over twenty languages worldwide and has been optioned by a major Hollywood film studio. Her second novel, Rise and Shine, Benedict Stone (named Wishes Under the Willow Tree in the UK), is also under option in the US as a TV movie. Her third novel is The Library of Lost and Found, and the fourth one is titled The Secrets of Love Story Bridge (The Secrets of Sunshine in the UK).
A world famous, highly successful author who asks her cleaner to finish her last novel and keep an enormous secret may seem a somewhat improbable premise, but somehow it seems to work rather well in The Book Share.
My Thoughts

When Essie dies unexpectedly, Liv is left with a life-changing last wish: to complete Essie’s final novel. To do so, change-averse Liv will have to step away from the fictitious worlds in her head, and into Essie’s shoes. As she begins to write, she uncovers a surprising connection between the two women – and a secret that will change Liv’s life forever… 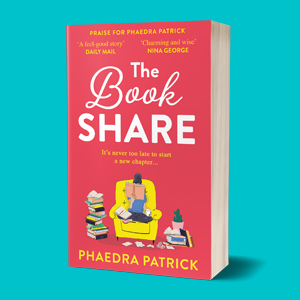