Rachel finds herself arriving on Must and escaping her Norwich life, even if only for a while, when she takes up a temporary position looking after the bird observatory on the island. The very definition of remote, there are only two other permanent residents, one of whom shouldn’t actually be there. Fraser is a bear of a man, scary at first but then all of his many kindnesses are introduced. He doesn’t want to share ‘his’ lighthouse with Rachel but he has no choice. And then there’s Lefty, a young lad, a stowaway. Why is he there?

Rachel is at crisis point. A series of disastrous decisions has left her with no job, no home, and no faith in herself. But an unexpected job offer take her to a remote Scottish island, and it feels like a chance to recover and mend her battered self-esteem.

Elizabeth Haynes is a former police intelligence analyst who lives in Norfolk with her husband and son. Her first novel, Into the Darkest Corner, was Amazon’s Best Book of the Year 2011 and a New York Times bestseller. Now published in 37 countries, it was originally written as part of National Novel Writing Month (NaNoWriMo), an online challenge to write a 50,000 word novel in the month of November.
You, Me and the Sea is a story of love, passion, revenge, loss, fear and vulnerability. There’s still a hint of the author’s gritty crime/thriller writing in there (this is definitely not a fluffy romance) but ultimately it’s a beautiful story of three lost people finding their way amidst the stark landscape of a Scottish island. I absolutely loved it.
The island’s other inhabitants are less than welcoming. Fraser Sutherland is a taciturn loner who is not happy about sharing his lighthouse –  or his precious coffee beans – and Lefty, his unofficial assistant, is a scrawny, scared lad who isn’t supposed to be there at all. Homesick and out of her depth, Rachel wonders whether she’s made another mistake.
Compelling, moving and teeming with feral desire: contemporary story of love and redemption set on a remote, windswept Scottish island from the bestselling author of Into the Darkest Corner and The Murder of Harriet Monckton.

She has written a further three psychological thrillers—Revenge of the Tide, Human Remains and Never Alone—and two novels in the DCI Louisa Smith series, Under a Silent Moon and Behind Closed Doors.
The cast of characters is tiny. There are the three inhabitants and a few other characters who have minor roles. To keep a story about so few people so intense, so moving, so full of raw emotion, and so enthralling says a lot about the author’s writing abilities. I could have carried on reading about the people and the island way past the end point. 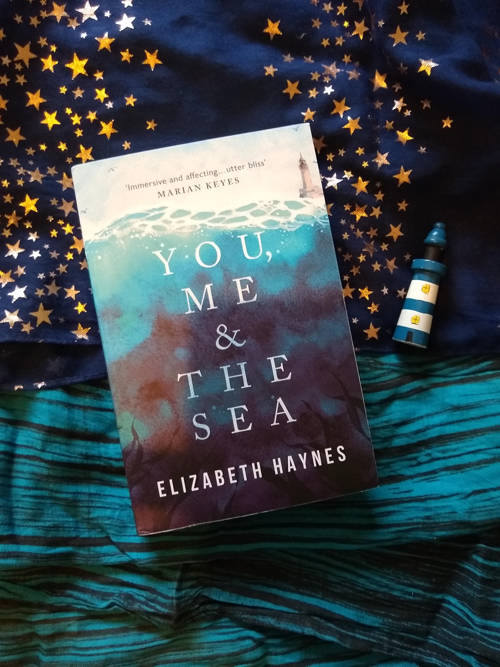 Give me a book set on an island and I’ll jump at the chance to read it. Make that island a Scottish one and I’m even more excited. Then make it a remote Scottish island and I’m off the scale! You, Me and the Sea is that book. It’s set on the fictional island of Must, not far away from the real island of May. It marks a departure in style for Elizabeth Haynes, but proves her versatility as a writer and I hope that she might write more in a similar vein.
From the moment I settled down to read and spotted the map at the beginning, to the wonderful ending, I was captivated by this book. The setting is amazing and incredibly well-drawn. I really felt as though I could put myself there on the island. It’s quite inhospitable but it grows on Rachel and it definitely grew on me too. Like many readers I’m sure, I would love to be able to visit it and am sorry it’s not real (it certainly felt real).

I’m so pleased to be sharing my thoughts about this gorgeous book today. You, Me and the Sea by Elizabeth Haynes is published by Myriad Editions and is out now. My thanks to Emma Dowson for sending me a copy for review and to the author for the beautiful way it was presented which you can see on this post. You can also read an extract from the very beginning of the book.

But, as spring turns to summer, the wild beauty of the island captivates her soul. For the first time in years she sees the hope of a better life – if only she can break the deadlock between two men who are at war with one another, and with themselves.
Facebook

Twitter
Like Loading…
Elizabeth’s latest novel, You, Me and the Sea is a contemporary story of love and redemption set on a remote, windswept Scottish island.

Next came her highly praised historical novel The Murder of Harriet Monckton (a Sunday Times Summer Read) which is based on the 1843 unsolved murder of a young school teacher in Bromley, Kent.