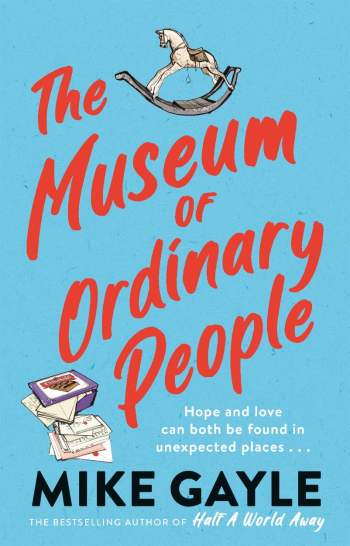 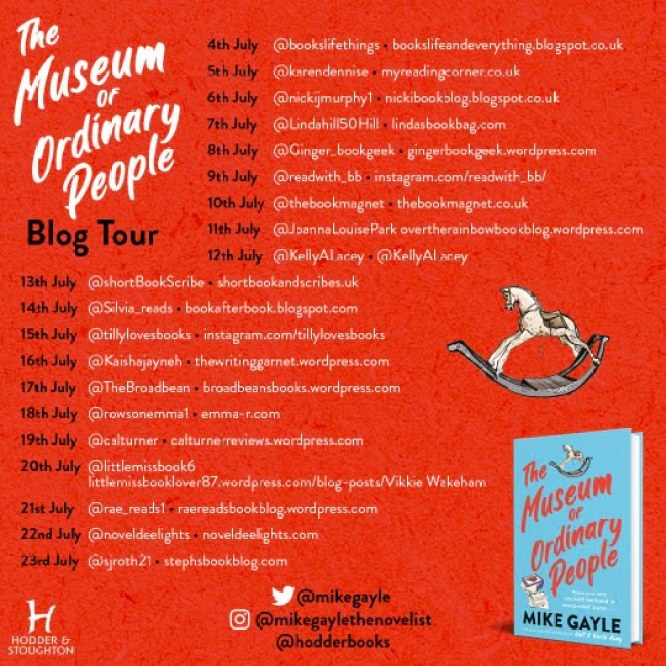 MY THOUGHTSFollow the author:
Website | Twitter | Facebook | Instagram | Goodreads | Bookshop.Org | AmazonUK Set in both Northampton and London, the story begins with Jess at her childhood home clearing her mother’s property for sale following her death. Something which resonated hugely with me since I had to do this for my own parents after their deaths some years ago. Within a space of a few weeks, each went to routine hospital appointments and never returned to their home of 50 years, and my childhood home where there were so many memories. Much like Jess’ experience, there were many items that I didn’t want to dispose of but I couldn’t keep everything because of space. If only there had been a Museum of Ordinary People available at that time.
My thanks to Jenny of Hodder & Stoughton for the tour invitation and for the proof copy to review. This one sang out to me as soon as I read the blurb and I’m so glad that I said yes please.
As they begin to delve into the history of the objects in their care, Alex and Jess not only unravel heartbreaking stories that span generations and continents, but also unearth long buried secrets that lie much closer to home.
The Museum of Ordinary People is a poignant and thoughtful read but also an uplifting one, it has heart and depth, I loved it and wouldn’t hesitate to recommend it. I don’t know whether or not Gayle was writing from personal experience but there were many times in the book when I was nodding in agreement at some of the emotions that Jess was experiencing.
Mike became a full time novelist in 1997 following the publication of his Sunday Times top ten bestseller My Legendary Girlfriend, which was hailed by the Independent as ‘full of belly laughs and painfully acute observations,’ and by The Times as ‘a funny, frank account of a hopeless romantic’. Since then he has written thirteen novels including Mr Commitment, Turning Thirty and The Man I Think I Know. His books have been translated into more than thirty languages. In 2021, Mike is the recipient of the Outstanding Achievement Award from the Romantic Novelists’ Association.
The story moves between Now and Then, told in Jess’ voice. Along with an excellent cast of supporting characters, Jess was engaging and likeable, as was Alex. Both had damaged histories, the full extent of which came out as the story progressed.
Finally, which item would I have donated to the Museum? It would most probably have been my dad’s drill. He was fantastic at DIY (I’m not!) and this drill whilst old and tatty was very much part of him. I couldn’t bear to put it into a skip so it’s currently in a crate with some others of their belongings in my loft. Memories indeed.
ABOUT THE AUTHOR

The Museum is almost a character in itself. It’s creation grew from something quite simple but it is giving its current owner somewhat of a headache and it faces an uncertain future. Jess has always wanted to be a museum curator but life got in the way however she has big ambitions for the museum and wants to ensure that its motley collection of letters, photographs, wheelbarrows and other miscellaneous items rescued from skips or donated, all with detailed labels are given greater public access. She initially discovered it by wanting to make a donation of her own. As Jess and Alex discover though, not all memories are happy ones and some are best left alone.

Still reeling from the sudden death of her mother, Jess is about to do the hardest thing she’s ever done: empty her childhood home so that it can be sold. But when in the process Jess stumbles across the mysterious Alex, together they become custodians of a strange archive of letters, photographs, curios and collections known as The Museum of Ordinary People.
As Jess discovers in Mike Gayle’s compassionate and heartfelt writing, coming face to face with the minutae of our parent’s lives, little things, which have no value to anyone else but hold a lifetime of memories is just overwhelming. To say that that The Museum of Ordinary People is just about loss and grief and loneliness would be doing it a disservice – there is actually much more to the story – I can’t say more – spoilers!
The superb new novel from the bestselling author of Half A World Away and All the Lonely People.