Now she’s watching Real Housewives and drinking wine in a crummy hotel room, trying to work out how she got here.
The narrative in When I Ran Away is real, it’s raw, it’s searing in its honesty. I felt visceral, tangible anger on Gigi’s behalf. I wanted to shake some of the other characters. If you read this book I guarantee the word ‘apron’ will stay with you. It’s the little things that often do, especially for a new mother.
Ten years later, Gigi, now a single mother consumed with bills and unfulfilled ambitions, bumps into Harry again and this time they fall deeply in love. When they move to London it feels like a chance for the happy ending she never dared to imagine. But it also highlights the differences in their class and cultures, which was something they laughed about until it wasn’t funny anymore; until the traumatic birth of their baby leaves Gigi raw and desperately missing her best friends and her old life in New York.
I’m so pleased to be sharing my thoughts about When I Ran Away by Ilona Bannister today. My thanks to Rachael Duncan of Two Roads/Hodder for sending a proof copy of the book for review purposes.

When I was thinking about writing this review I was wondering how on earth to explain the story. It’s a sweeping story covering a period of 20 years and there’s so much to it, beginning with the loss of Gigi’s brother, Frankie, on 9/11. That loss echoes down through Gigi’s life but I think the overarching theme is the one of motherhood and all that comes with it. I found myself nodding along all the time, remembering what it’s like with a newborn, that feeling like you’re getting everything wrong.

Bannister perfectly portrays American Gigi living in middle class England. So many things don’t make sense to her, not least the class system which leaves her feeling like an outsider looking in, the other mums from the baby group who seem to have it all together when Gigi doesn’t, her husband, Harry, who just doesn’t seem to get how she’s feeling, and her work colleagues who all seem to manage their career and a family whilst still apparently rising to the top and keeping all the plates spinning. Meanwhile, Gigi is wearing the same old clothes she was wearing before she gave birth, can hardly bear to pick her baby up, and sticking a ready meal in the oven requires more effort than she can muster up. In short, you could liken it to being hit by a truck.

I didn’t quite know what to expect when I embarked upon reading this book. What I got was a perceptive and intelligent story of a woman breaking down. There are moments of humour so don’t think it’s all weeping and wailing, but ultimately it’s a story that is full of depth and meaning. A fantastic portrayal of what it means to be a woman and a mother.
When the Twin Towers collapsed, Gigi Stanislawski fled her office building and escaped lower Manhattan on the Staten Island Ferry. Among the crying, ash-covered and shoeless passengers, Gigi, unbelievably, found someone she recognised – the guy with pink socks and a British accent – from the coffee shop across from her office. Together she and Harry Harrison make their way to her parents’ house where they watch the television replay the planes crashing for hours, and she waits for the phone call from her younger brother that never comes. And after Harry has shared the worst day of her life, it’s time for him to leave. 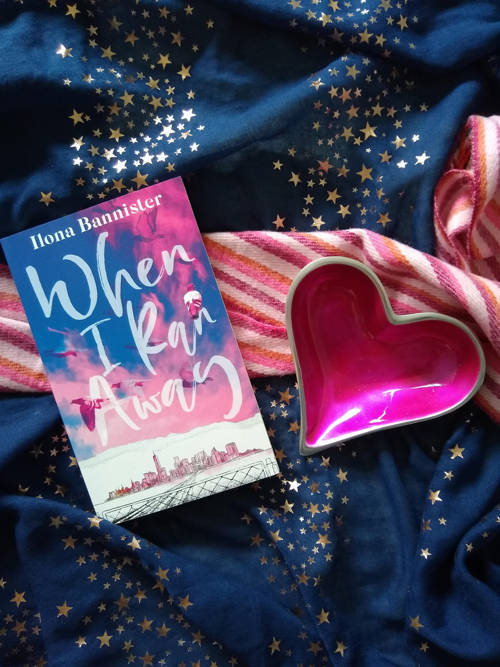 When I Ran Away is such a fantastic read with so many strong themes of motherhood and grief. It’s an extremely astute debut from Ilona Bannister.

An unforgettable novel about love – for our partners, our children, our mothers, and ourselves – pushed to its outer limits.

Ilona Bannister is a dual qualified US attorney and UK solicitor. She practiced UK immigration law before taking a break to raise her sons. Her experience as a lawyer working closely with families in difficult situations as well as her life as an American expat in her adopted country have made her a keen observer of people and the struggles of outsiders. Ilona is also developing a following on her astute and sharply funny Instagram account, soon to be a blog, @ilona.bannister where she uses Lego figures to discuss maternal mental health, feminism, socially conscious parenting and the amusing, yet sometimes daunting, side of being a parent. Ilona is a New Yorker married to an Englishman and raising two young sons in London. In her free time, Ilona enjoys running. Her first novel, When I Ran Away, was developed on Faber Academy’s Work in Progress course.

This morning Gigi left her husband and children.