From the moment Elin and Will arrive everything seems to go wrong. Bad weather, missing people, strange attacks, whispering in corners, and just a general sense of unease pervade. This is certainly an atmospheric read with the weather and the sinister feel of the hotel adding an extra dimension to this thriller. The setting really stands out for me.

Arriving in the midst of a threatening storm, Elin immediately feels on edge. Though it’s beautiful, something about the hotel, recently converted from an abandoned sanatorium, makes her nervous – as does her brother, Isaac.

It’s hard to believe this is a debut novel. It’s plotted so well with twists and turns galore. The hotel is unnerving and its past proves even more so. I think this is very much a plot-led story and so the characters felt kind of secondary to that, but that’s often the case with thrillers and isn’t a criticism, just an observation.
Today I’m sharing my thoughts about The Sanatorium by Sarah Pearse which is a great debut novel. My thanks to Thomas Hill from Transworld for sending a proof copy of the book for review purposes.
An imposing, isolated hotel, high up in the Swiss Alps, is the last place Elin Warner wants to be. But she’s taken time off from her job as a detective, so when she receives an invitation out of the blue to celebrate her estranged brother’s recent engagement, she has no choice but to accept.

Sarah Pearse lives by the sea in South Devon with her husband and two daughters. She studied English and Creative Writing at the University of Warwick and worked in Brand PR for a variety of household brands. After moving to Switzerland in her twenties, she spent every spare moment exploring the mountains in the Swiss Alpine town of Crans Montana, the dramatic setting that inspired her novel. Sarah has always been drawn to the dark and creepy – remote spaces and abandoned places – so when she read an article in a local Swiss magazine about the history of sanatoriums in the area, she knew she’d found the spark of the idea for her debut novel, The Sanatorium. Her short fiction has been published in a wide variety of magazines and has been shortlisted for several prizes.
I enjoyed The Sanatorium very much. I’ll most definitely be looking out for Sarah Pearse’s next book which I hope will also be suitably chilling.

But no-one has realized yet that another woman has gone missing. And she’s the only one who could have warned them just how much danger they’re all in . . .
The Sanatorium was just what it suggests, a clinic for TB sufferers, but now it’s a fancy hotel in the Swiss Alps. Elin Warner is there with her boyfriend, Will, to celebrate her brother’s engagement. Longstanding family issues mean she hasn’t seen Isaac for a while but it’s time to try and put those issues to rest and Elin thinks facing it head on is the way forward. She’s also on long term leave from her job as a detective and is trying to decide whether she is able to go back to her job.

And when they wake the following morning to discover his fiancée Laure has vanished without a trace, Elin’s unease grows. With the storm cutting off access to and from the hotel, the longer Laure stays missing, the more the remaining guests start to panic. 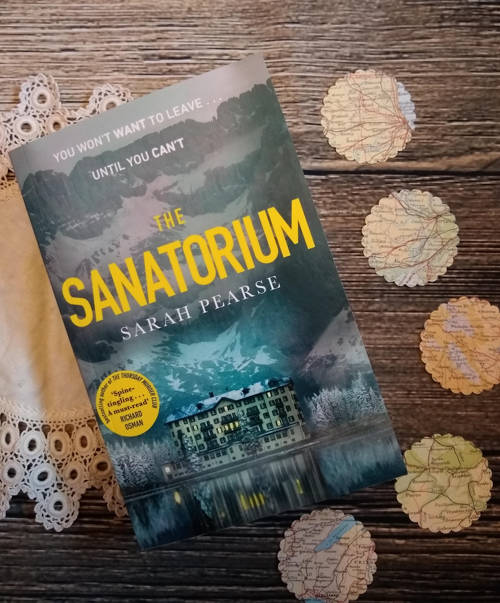 Just the title of this book is enough to send chills down your spine, isn’t it? I love the cover too, which gives off a very eerie vibe.

EVERYONE’S IN DANGER. ANYONE COULD BE NEXT.

Once I was into the story I found it hard to put this book down. It’s fast-paced, often with cliff-hangers at the end of chapters, so it compelled me to keep reading. Also, every time I thought I knew what was happening a curveball was thrown at me and I really appreciated that element of suspense throughout.