You think you’ll stay the same – you won’t. Infidelity will change you forever. There can be no going back.

Kirsten Calloway knows she should be grateful. She has a stable marriage, decent job, and a wonderful teenage daughter. But she also has a raging libido that won’t shut up, and a husband who’d rather go on a bike ride.

Enter Zac: younger, handsome and everything Kirsten could hope for in bed. For a while, they seem to have it all. Kirsten even finds herself becoming a better wife and mother. But Zac wants more – a lot more, and he’ll stop at nothing to get it.
She bumps into an old friend at a school reunion who faces a similar problem. Dianne, though, has found the answer: a discreet agency which arranges casual sex for people just like them, people who want to keep their marriages but also scratch that itch.

I thought Reckless was a great debut novel. I found it easy to read but also tense. I raced through it towards the really clever conclusion via an unexpected turn of events. The plotting is tight and exciting, and whilst I didn’t particularly take to any the characters I found them interesting and I wanted to keep reading about them. There are also some nice bits of humour that I enjoyed sniggering at. All in all, an excellent read.
This is one of those books where I felt like screaming out loud to Kirsten: “what the hell are you doing?!”. She really does live up to the title of the book and is completely reckless in her actions at times. I could see her getting deeper and deeper into a mess and wondering how she was going to get herself out of it. This is a thriller but it’s also a domestic noir looking at middle-age and that feeling of being overlooked and that the best years may in fact be behind you. I must admit I was expecting something with a bit more raunchiness in it but this book is more about the consequences than the actual acts.

Sexually charged, shocking and relatable, Reckless is a profound exploration of marriage, motherhood and desire.
Like Loading…
My review today is of Reckless by R.J. McBrien which is published today by Welbeck. My thanks to the publishers for the review copy of the book.

RJ McBrien attended York University, the Sorbonne and graduated from the Yale School of Drama. He writes for TV (Wallander, Spooks and Trust for ITV) and has sold scripts to major Hollywood studios, for whom he regularly works as a script doctor. Reckless is his first novel. 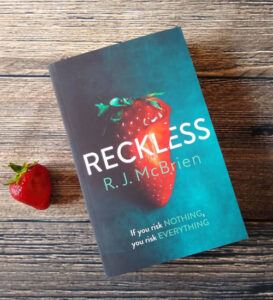 Kirsten Calloway is happily married to Mark with a teenage daughter who seems to have her head screwed on. She works in Occupational Therapy at the local hospital and her life is stable. Or boring? The one big problem is that Kirsten wants physicality in her marriage and Mark really ain’t that bothered. After meeting with an old school friend, Kirsten takes the rather drastic step of joining an agency that hooks people up with each other for sex which seems like the perfect solution to Kirsten. Of course, it’s not the perfect solution and the guy that Kirsten hooks up with, Zac, wants rather more than she has to offer.