Rachel has also written over twenty original afternoon plays and adaptations of the classics for BBC Radio 4, including all the Bronte novels. She lives with her family near Stroud.

Ten years ago, Harold Fry set off on his epic journey on foot to save a friend. But the story doesn’t end there.
Now his wife, Maureen, has her own pilgrimage to make.
Maureen Fry has settled into the quiet life she now shares with her husband Harold after his iconic walk across England. Now, ten years later, an unexpected message from the North disturbs her equilibrium again, and this time it is Maureen’s turn to make her own journey.

Rachel Joyce is the author of the Sunday Times and international bestsellers The Unlikely Pilgrimage of Harold Fry, Perfect, The Love Song of Miss Queenie Hennessy, The Music Shop, and the New York Times bestseller Miss Benson’s Beetle, as well as a collection of interlinked short stories, A Snow Garden & Other Stories. Her books have sold over 5 million copies worldwide, and been translated into thirty-six languages. Two are currently in development for film. 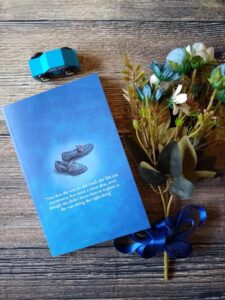 When I heard that Rachel Joyce had a new book coming out and it was a book that would turn the Harold Fry and Queenie Hennessey books into a trilogy, I knew it was a must-read for me. You could read it as a standalone but honestly, why would you? The back story is so important and the stories are superb. Maureen Fry and the Angel of the North is a slim volume, a novella rather than a full-length novel, but it’s absolutely perfect and is just enough to round off the journeys, both physical and emotional, that the characters have been on.

But Maureen is not like Harold. She struggles to bond with strangers, and the landscape she crosses has changed radically. She has little sense of what she’ll find at the end of the road. All she knows is that she must get there.

Maureen Fry and the Angel of the North is a deeply felt, lyrical and powerful novel, full of warmth and kindness, about love, loss, and how we come to terms with the past in order to understand ourselves and our lives a little better. Short, exquisite, while it stands in its own right, it is also the moving finale to a trilogy that began with the phenomenal bestseller The Unlikely Pilgrimage of Harold Fry and continued with The Love Song of Miss Queenie Hennessy.

It’s ten years since Harold did his pilgrimage and now his wife Maureen hears something that compels her to make her own journey, but this time it’s a road trip to the north of England. A determined woman, Maureen sets off on a long drive across the country.

Although Maureen is often prickly and awkward with people, Rachel Joyce manages to make the reader like her and empathise with her, showing Maureen’s personality through her actions and illustrating the complexities of the human psyche, especially in the way Maureen deals with other people. She writes her with warmth and understanding, particularly when considering the reason behind her journey (you’ll have to read the book to find that out!). I thought it was wonderful to be reunited with Harold and Maureen and to read again about Queenie. The stories of the previous two books are intertwined perfectly with this one to bring the whole thing full circle. It’s a moving and poignant story, beautifully observed, charmingly written and a true delight.

This is a slender book but it has all the power and weight of a classic.
Maureen Fry and the Angel of the North will be published by Doubleday on 20th October 2022 in hardcover, eBook and audiobook. My thanks to Alison Barrow for the proof copy for review.