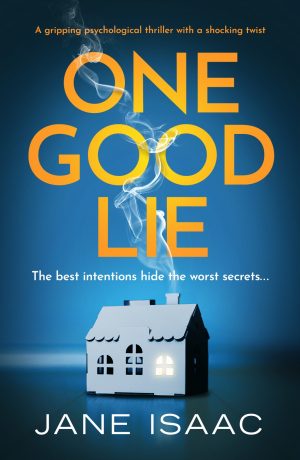 Publisher: Canelo
Format: Ebook and Paperback (24 June 2021)
Page Count: 352
Source: Ecopy received for review
Because Ewan is seeing Ruby’s sister, Sophie. He’s been wonderful to Sophie, comforting her after her mother’s murder and taking care of her little kids, too. In short, he’s been the perfect boyfriend. This was just a stupid mistake.
My thanks to Emma of damppebbles blog tours for the invite and to the publisher for providing an ecopy for review. Having long been a fan of Jane Isaac’s three crime series, some of which are reviewed here, I was keen to read this standalone venture into psychological thriller territory.
On the night of her mother’s wake, Ewan kisses a shocked Ruby. They both agree to pretend that the kiss never happened – in fact, according to Ewan, no one even needs to know he walked Ruby home.
After a slower start to bring the characters into play, this turned into a fast paced read and the author’s first foray into the thriller genre has got off to a very good start. I do love her crime novels but look forward to reading more thrillers too.
A gripping and unputdownable thriller that will keep you guessing into the early hours of the morning. Perfect for fans of Claire McGowan, Sue Watson, and Jackie Kabler.
Jane is author of three bestselling detective series: DCI Helen Lavery, DI Will Jackman (based in Stratford upon Avon), and DC Beth Chamberlain (a Family Liaison Officer). Her novels have been nominated as best mystery in the ‘eFestival of Words Best of the Independent eBook awards’ and selected as ‘Thriller of the Month’ by E-thriller.com.

Set over a period of nine days and following a most intriguing prologue, the story begins with a small memorial service at Sophie’s home for Aileen McBride, the mother of Sophie and Ruby. Aileen had been murdered many months before and following the trial, the person responsible was now in prison. It is also the anniversary of Aileen’s birthday. Although still grieving, both sisters wanted this to be a point to move their lives forward – Sophie had a new boyfriend, Ewan who seemed to be perfect and Ruby was getting on with her life. However, things are not that straightforward and something happens that night which makes Ruby doubt Ewan and she is forced to lie. It is when the lies start to catch up with her that she starts digging further and things do get interesting.
With an intermittent narrative by an unknown sinister voice, this well plotted thriller had me wondering if anyone was who they claimed to be. I had my suspicions about a couple of people and there was a point when I realised the who but not the why however all was revealed before the dramatic conclusion and it was something that I hadn’t even considered.
Jane Isaac has managed to keep the suspense and tension going throughout the story. Matters are further complicated when a woman’s body is found which has connections to Aileen’s murder and, with various unsettling occurrences, the worry is that the sisters are in danger.
After all, how well do the sisters really know Ewan? How well do they know each other? And are they sure they know the truth about what really happened on the day their mother died?
But when Ruby learns of another woman’s murder close to Ewan’s route home on the night of the kiss, she fears that her lie has left her sister in terrible danger.
Jane loves to hear from readers and writers. You can reach her via her website at www.janeisaac.co.uk where you can join her Readers’ Club for information on new releases.

Jane Isaac is married to a serving detective and they live in rural Northamptonshire, UK with their daughter and dogs.
Talking about characters, Ruby was by far my favourite sister. She was tenacious in her investigations to find out the truth and desperate to protect her remaining family. It’s a little odd to say that I disliked a character, because they hadn’t actually done anything wrong, but Sophie really irritated me. She was the more sensitive of the two sisters – but the most stubborn and naive and I lost patience with her so many times, especially when she threw a hissy fit. There was something a bit off about Ewan, but he appeared to be very supportive to Sophie and so good with her children, could he really be capable of anything so awful?
2021 sees Jane’s first foray into psychological suspense with the release of One Good Lie in June. A further psychological suspense novel will follow in 2022, along with a new DCI Helen Lavery book.

Her sister’s boyfriend. Her worst nightmare.