“After all, what was sanity, except being able to contain the madness inside yourself?”

She subsequently turned to literature, earning a Ph.D. in English at University College London, where she focused on early-twentieth-century women’s writing and was awarded the West Scholarship ‘for distinguished work in the study of English Language and Literature.
In this fiction based on fact, Louisa Treger tells the story of Nellie’s early life living with her family in 1870s Pittburgh, through some bad times until she decides she wants to make her living as a journalist. At the time, women journalists were virtually non-existent but Nellie was determined, and to make a splash on moving to New York she comes up with the idea of faking insanity to get herself sent to the notorious Women’s Lunatic Asylum on Blackwell’s Island, and to write about what she experiences there as an exposé.
But when the asylum door swings shut behind her, she finds herself in a place of horrors, governed by a harshness and cruelty she could never have imagined. Cold, isolated and starving, her days of terror reawaken the traumatic events of her childhood. She entered the asylum of her own free will – but will she ever get out?
Madwoman by Louisa Treger will be published by Bloomsbury on 9th June in hardcover, and eBook. My thanks to the publishers for the proof copy and to the author for providing a finished copy.

But life in the city is tougher than she imagined. Down to her last dime and desperate to prove her worth, she comes up with a dangerous plan: to fake insanity and have herself committed to the asylum that looms on Blackwell’s Island. There, she will work undercover to document – and expose – the wretched conditions faced by the patients.
Louisa Treger, a classical violinist, studied at the Royal College of Music and the Guildhall School of Music and worked as a freelance orchestral player and teacher
This is a fascinating story in every way. This is a woman who has pulled herself up by her bootstraps and despite opposition has made her mark on history. I found Madwoman to be not only heartbreaking and shocking, but also inspirational. Louisa Treger has taken the facts and weaved them into a spellbinding account of a distressing, but ultimately life-changing episode, both for Bly and for the women who came after her. I thought it was superb and unforgettable. This is historical fiction at its very best.

Madwoman is a brilliant book, beautifully written with empathy and care. I found it completely gripping and utterly compelling. Treger paints such a vivid and disturbing picture of life in the asylum that it was actually genuinely quite disconcerting and I wish I hadn’t read the asylum scenes just before bed. It’s made all the more powerful because not only did this happen to Bly but this was happening to so many women, many of whom were not actually mad but had perhaps been indiscreet in their marriage or found themselves in poverty with nowhere else to go.

In 1887 young Nellie Bly sets out for New York and a career in journalism, determined to make her way as a serious reporter, whatever that may take.
Louisa’s first novel, The Lodger, was published in 2014, and her second novel, The Dragon Lady, was published by Bloomsbury in 2019. She lives in London

An extraordinary portrait of a woman way ahead of her time, Madwoman is the story of a quest for the truth that changed the world. 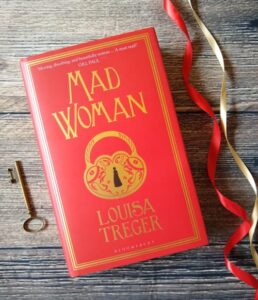 Nellie Bly. It was a name I’d heard but I knew nothing about this woman and that is a travesty as, having now read Madwoman, I know she was an incredibly brave, trail-blazing woman.