In 1887 young Nellie Bly sets out for New York and a career in journalism, determined to make her way as a serious reporter, whatever that may take.
Nellie literally and in every other way allowed women to inhabit new spaces, and she gave a voice and a face to women who had no visibility or status in society. She spoke truth to the authorities, and she also exposed the truth for everyone to see. What she left for us is a guide to how we can help others by being non-judgemental and willing to listen, and by opening our hearts. It’s a guide to achieving serious, compassionate change to unlock injustices. She was a woman who transcended her time and, 135 years later, we still need her kind of advocacy.
The question was asked by a friend, knowing that I was, first, a die-hard fan of trailblazing women and, second, searching for a new subject. I hadn’t, but went away to research her, and was instantly hooked. I had my muse for my next book, MADWOMAN. 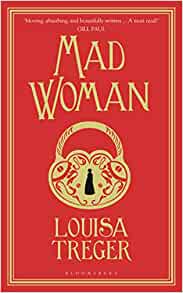 She moved to New York, but life in the city was tougher than she imagined, and no newspaper would employ her. Down to her last dime and desperate to prove her worth, she came up with a dangerous plan. She would feign madness and institutionalize herself for ten days. She would go where no sane woman had voluntarily gone before and come back with a story like no other, even though there was no guarantee that she’d ever be able to leave. MADWOMAN recounts her ten-day ordeal there in grim detail.
During my research, I discovered that Nellie Bly was America’s first female investigative journalist. She was born to privilege in 1864, the daughter of a Pennsylvania judge, but her father died when she was six years old, and her mother remarried a violent alcoholic. Nellie’s world was turned upside down, but she was a survivor. She coped with her stepfather and with having to work after being deprived of things that were available to her before. In 1885, she got a job with the Pittsburgh Dispatch but left after only nine months because she was limited to working on the society pages, which she hated, and was barred from writing serious news.
The barge pulled away from shore, pitching and rolling. Some of the patients were
But life in the city is tougher than she imagined. Down to her last dime and desperate to prove her worth, she comes up with a dangerous plan: to fake insanity and have herself committed to the asylum that looms on Blackwell’s Island. There, she will work undercover to document – and expose – the wretched conditions faced by the patients.
whimpering or crying out, but the guards barked at them to shut up. There was a girl strapped to the bunk, weeping and shaking, her face smeared with snot and tears. Through her short, fair hair, raw patches gleamed on her scalp. Nellie got up to comfort her, but a hard-faced guard shoved her back onto the bench. No one else tried to help. Eventually, the girl’s sobs turned to sniffles and she fell silent, her eyes strained wide with fear. Nellie opened her mouth to speak to her, but caught the guard’s eye and let the words fall silent. The air in the cabin filled with stale breath.
Today Louisa has written a post about how she came to write a book about Nellie Bly. There’s also an extract from the book straight after so do be sure to read that.
“Have you heard of Nellie Bly? She’s the sort of woman you write about.”
I am going to share an excerpt from the Prologue of MADWOMAN, which describes Nellie Bly’s arrival at the asylum, and sets the scene for her experience as a patient.
conditions she witnessed and endured. They captured public imagination and turned her into a celebrity, a fiery national presence. Shortly afterward, officials added nearly million to the asylum’s budget, an enormous amount for 1887. She continued to write about poverty and politics with a special focus on women whom no one else would speak about – baby-selling rackets, harsh conditions for factory workers, and much more. Again and again, she stepped into the lives of others, fighting for justice, understanding that what mattered most to the marginalised was being seen and understood. I think it was the years of privation that gave her an understanding of what it meant to have given up on belonging and joy. Those years made her what she was.
1887
An extraordinary portrait of a woman way ahead of her time, Madwoman is the story of a quest for the truth that changed the world.
Panic exploded in Nellie, turning her vision gray. She clenched and unclenched her hands, and her heart dragged at her ribcage. What on earth have I done? The Island was where they shipped criminals, paupers, the sick, and the insane; kept them out of the way, out of sight, so that sane, decent people didn’t need to have them on their minds.
About the Book
Nellie breathed air deep into her lungs, trying to get a hold of herself. It was cool and fresh, smelling of damp earth. She could hear the staccato call of a thrush and, in the distance, crows were cawing. Coming from Manhattan, it was a relief to hear birds, to see all the green space, but they weren’t given long to enjoy it. New guards began herding them into an ambulance.
‘Welcome to Blackwell’s Island,’ one of them said. He cleared his throat and spat. ‘Once you get in here, you’ll never get out.’
NELLIE BLY: TEN DAYS A MADWOMAN
When Nellie was released, her articles described with great empathy her experiences in the asylum, and they did not shy away from describing the brutal
Prologue
Louisa Treger is the author of The Lodger and The Dragon Lady. Her latest novel, Madwoman, was published by Bloomsbury on 9 June 2022.
But when the asylum door swings shut behind her, she finds herself in a place of horrors, governed by a harshness and cruelty she could never have imagined. Cold, isolated and starving, her days of terror reawaken the traumatic events of her childhood. She entered the asylum of her own free will – but will she ever get out?
She glued herself to the grimy porthole and saw schooners on the waterfront, gulls swooping low over the dark brown river that billowed and seethed like tea coming to the boil. Soon a handful of large buildings appeared on the horizon, strung out in a line on a long, narrow strip of land. The boat headed toward them and docked, bumping and creaking against the tyres that lined the wharf. The women were led up a plank to shore. They stood quietly now; they seemed cowed, stunned.