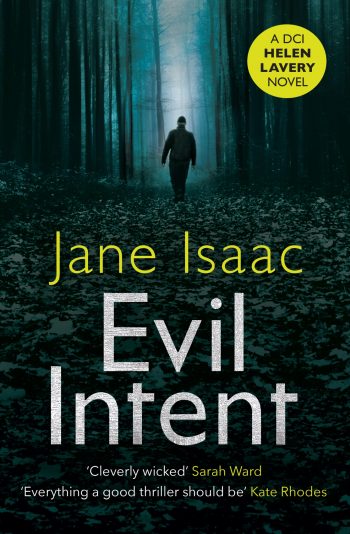 The arm appears from nowhere.
The tall firs of Blackwell Wood loom in the distance. It’s her beacon, her chance for safety. Somewhere to think. Somewhere to hide.
She holds her breath, hardly daring to wonder if she’s lost him. Sharp tears prick her eyes.

EXTRACT She screams now. Shrill and loud. Arms windmilling, splashing through the water as she struggles for purchase on the riverbed.
My thanks to Legend Press for the tour invitation. For my turn today I have an extract to share. I just wish I’d had time to review (a list and links of previous reviews of Jane’s books are below). This latest release, Evil Intent, is number 4 in the DCI Helen Lavery series and Jane’s 11th book. I’m a little behind in the Lavery series, I have read the first one (An Unfamiliar Murder) and have purchased Evil Intent which I’m looking forward to catching up with.
An Unfamiliar Murder (DCI Helen Lavery #1) (2016)
Beneath the Ashes (DI Will Jackman #2) 2017
The Other Woman (DC Beth Chamberlain #1) 2020
One Good Lie (standalone thriller) 2021
Author Links:
Seconds turn into minutes. An owl calls to its mate, who responds with a hoot. The wind rustles through the trees. Her shoulders slacken. She pushes her back against the riverbank, desperately trying to stop her teeth chattering. She needs to bide her time. Make sure he’s far enough away before she climbs out and finds the path back to the road. Another shiver, stronger. She clamps her jaw shut.
She didn’t hear him navigate the bank behind her. Didn’t sense his presence nearby, the water smothering the stench of stale nicotine. He reaches through the willow, fingernails snagging at her skin. A hand grabs her hair. Pulling, dragging.

Publisher: Legend Press
Format: Ebook & Paperback (1 February 2022)
Pages: 338
Meanwhile, she is shocked to discover that her younger son’s new best friend is the nephew of organised crime boss Chilli Franks – the man who has held a grudge against Helen’s family since her father first put him away in the 1990s.
She trips, hears the tear of her dress as she clambers back up and glances over her shoulder. The tunnel of light is blinding. She quickens to a sprint, tears streaking her face, lungs burning. Over the low fence and into the wood. Veering off at a side path, breaking through the bracken.
Jane Isaac studied creative writing with the Writers Bureau and the London School of Journalism. Jane’s short stories have appeared in several crime fiction anthologies. Her debut novel, An Unfamiliar Murder, was published in the US in 2012, and was followed by five novels with Legend Press: The Truth Will Out in 2014, Before It’s Too Late in 2015, Beneath the Ashes in 2016, The Lies Within in 2017, and A Deathly Silence in 2019.
The light weaves through the trees. Frantically, she stays beneath the beam and moves down the river, searching for the willow. It’s further down than she remembered, around the bend. She almost gives up when she spots it, sinks into the recess behind, pulls the spindly branches across her front. And waits.
Across the dark fields, Shauna runs. Where stones in the soil pick at her stockinged feet and clods of earth conspire to throw her off balance.

Other reviews:
She needs to make it to the river. There’s a recess there where the bank has eroded beneath an old willow; its overhanging branches providing a curtain of cover to a secret haven. She and Tom used it as a den when they were young. That’s where Tom would go.
The torchlight fades. The air quietens.
Heart pounding her chest, her eyes dart in all directions, checking the area. She’s about to move off when something is flung around her neck. Instinctively, her hands go to it. A thread. No, a wire. Pulling tighter and tighter. She panics, tries to grab at it, but it’s too far embedded. Sinking into the skin. Tightening her throat. Constricting her airway. Her eyes bulge, her tongue fills her mouth.
Jane lives in rural Northamptonshire with her husband, daughter and dog, Bollo.
ABOUT THE AUTHOR

If this prologue has tempted you, Evil Intent is currently available to download on Amazon UK for 99p.
As her personal and professional lives collide, Helen finds herself in mortal danger as she races to track down the serial killer and restore safety to the streets of Hampton.
A bramble rips at her cheek as she lunges forward.
She navigates east towards the river, away from the firs. To the broad-leafed trees with their wide protective branches and dark canopy. Tall, strong. Like Tom. Self-preservation numbing her torn, bleeding feet. Her toe catches a root, her ankle turns. She falls again. Splays her hands to gain purchase, staggers back up. He’s so close now she can smell him: stale sweat, the thick nicotine in the folds of his clothes.
A bat swoops in front. It’s the last thing she sees before the river blurs and descends into darkness.

Footfalls thud the ground behind her. He doesn’t speak, doesn’t call out. But she’s already seen the hunger in his eyes, the visceral determination.
When a series of women’s bodies is discovered in the heart of rural Hamptonshire with a pentagram carved on their chests, DCI Helen Lavery is forced into a cat-and-mouse chase with a murderer who ultimately turns the tables and targets her.Then he’s gone. And the water stills. She’s crossing the bridge when the beam touches her. She ignores it, scoots down the riverbank. Gnarly roots rip at her palms as she slides into the water, suppressing a gasp. It’s icy cold. Shivers skitter through every fibre of her being.
He’s behind her, zigzagging through the undergrowth, his presence signalled by flickers of torchlight bouncing off the tree trunks. But not for long. Shauna knows this wood better than anyone. She grew up near here. Hacked her horse along its bridleways, explored the back paths and gullies with her brother, Tom.