Recommended.
Publication date – 28 October 2021
As with many searches into history, there is no neat ending. There are and always will be gaps, missing information, lost artefacts. The author and the reader learn that it is not a failure to not fill those gaps. It is a success to come to accept them for what they are, and to acknowledge it it is similarly not a failure to realise there will be gaps in our lives that we cannot always fill.
‘When we first met, I was a child, and she had been dead for centuries.
I will admit, I was not familiar with the Caoineadh Airt Uí Laoghaire or with Eibhlín Dubh Ní Chonaill so I had no prior knowledge to draw upon. In fact, speaking no Gaelic, I often had to look up the pronunciations, so that I could read it without giving the words my English intonation. The fact that Eibhlín Dubh and her husband Airt Uí Laoghaire can be found, can be read about even briefly, allows for even more of a connection to the book.
Not only is A Ghost in the Throat an ode to a long ago lament, it is an intimate look at the life of the author. As much as the reader is transported back in time to Eibhlín Dubh Ní Chonaill’s imagined life, they are also very much in the present, following the author through her journey, shown how the words and meaning of the Caoineadh Airt Uí Laoghaire become an almost obsession. The author clings to the Caoineadh and Eibhlín Dubh as she goes through troubles in her own life, a raft that helps her navigate difficult moments.
Source – review copy
A fascinating look into the past, at a poem showing the devotion and grief suffered at the loss of a lover that has resonated throughout centuries.
Across the centuries what is clear from the Caoineadh is Eibhlín Dubh grief at the loss of her husband. Whilst the language may have changed, grief is very much a present thing, a personal experience that is universally understood. This is perhaps one of the reasons why the keen still resonates today. Another aspect that intrigued (and infuriated) the author was the removal of Eibhlín Dubh from history, her legacy remaining in the lament that was not written down for the first time until after her death. As the author tries to find out more information, what she doesn’t find is just as enlightening as what she does unearth.
Published by Tramp Press
There is something about this book that draws the reader in. I can’t put my finger on it. Perhaps it is the intimacy created by the author, the feeling that she is talking to you and you alone. Perhaps it is the poem, a lament travelling through time to make the grief of a woman long dead real and immediate. It is perhaps both of these things and more but whatever the magical alchemy, I was soon drawn in. 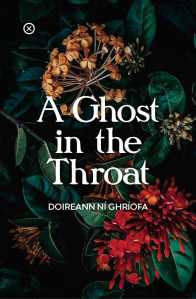 A true original, this stunning prose debut by Doireann Ní Ghríofa weaves two stories together. In the 1700s, an Irish noblewoman, on discovering her husband has been murdered, drinks handfuls of his blood and composes an extraordinary poem that reaches across the centuries to another poet. In the present day, a young mother narrowly avoids tragedy in her own life. On encountering the poem, she becomes obsessed with finding out the rest of the story.
Doireann Ní Ghríofa first encountered Caoineadh Airt Uí Laoghaire in school. A lament first voiced by Eibhlín Dubh Ní Chonaill after the murder of her husband in the 1700s, centuries later, the now written keen didn’t hold much appeal but soon she found herself drawn to it, and the woman behind it. And so what begins as a curiosity becomes an almost obsession as Doireann Ní Ghríofa follows Eibhlín Dubh through time and tackles worrying events in her own life.
I am eleven, a dark-haired child given to staring out window … Her voice makes it 1773, a fine day in May, and puts English soldiers crouching in ambush; I add ditch-water to drench their knees. Their muskets point towards a young man who is falling from his saddle in slow, slow motion. A woman hurries in and kneels over him, her voice rising in an antique formula of breath and syllable the teacher calls a caoineadh, a keen to lament the dead.’