Joanne Harris’ novels include Gentlemen and Players, Chocolat, The Strawberry Thief, Five Quarters of the Orange, Different Class, The Lollipop Shoes, Runemarks, The Gospel of Loki, Sleep, Pale Sister and Orfeia. Her latest novel, A Narrow Door, was published by Orion on 4 August 2021.
About Joanne Harris
4. You have been writing for many years now. Is there anything about the process of publishing a book that still surprises you?
The setting is St Oswald’s, a crumbling private school for boys in the north of England. Founded in the 16th century, now beset by financial problems, falling numbers and a series of scandals, the School seems on the brink of disaster. Roy Straitley, the elderly Latin Master and last surviving relic of the School’s glory days, has been facing retirement for years, but cannot contemplate leaving the place that represents his whole life.
1. Tell us a little about A Narrow Door.
It’s an incendiary moment for St Oswald’s school. For the first time in its history, a headmistress is in power, the gates opening to girls.
Publishing is a world in flux, which has undergone many, many changes since I joined it years ago. Everything about it surprises me, not least the different ways of self-publishing that have evolved to rival the large publishers and to give a chance to lesser-known writers in less commercial or experimental genres to find their audience.
Now I’m in charge, the gates are my gates. The rules are my rules.
Rebecca Buckfast has spilled blood to reach this position. Barely forty, she is just starting to reap the harvest of her ambition. As the new regime takes on the old guard, the ground shifts. And with it, the remains of a body are discovered.
Ulysses. I already dislike it, so having to re-read it would be less painful than growing to hate something I love…
I plan certain key scenes ahead, but I like to keep certain details fluid. That way, I can surprise myself (and the reader) with details and revelations as they emerge.
7. I like to end my Q&As with the same question so here we go. During all the Q&As and interviews you’ve done what question have you not been asked that you wish had been asked – and what’s the answer?
5. What do you do when you aren’t writing? What do you do to relax and get away from it all?
This year, new challenges await; not least the arrival of girls in the School, and the appointment of a Headmistress, the first in the School’s 500-year history.
3. Are you a plan, plan, plan writer or do you sit down and see where the words take you?
JOANNE HARRIS is an Anglo-French author, whose books include fourteen novels, two cookbooks and many short stories. Her work is extremely diverse, covering aspects of magic realism, suspense, historical fiction, mythology and fantasy. In 2000, her 1999 novel CHOCOLAT was adapted to the screen, starring Juliette Binoche and Johnny Depp. She is an honorary Fellow of St Catharine’s College, Cambridge, and in 2013 was awarded an MBE by the Queen.
You can’t keep a good woman down.
You can buy A Narrow Door here (please note this is an affliate link so if you buy from here I may make a few pence. Other retailers are available). 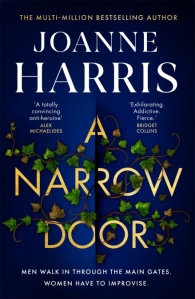 I’ve had all the questions I could imagine (including this one), but I don’t hear: “Are you okay?” anything like enough. All authors need this one from time to time.
Thus begins a game of chess unlike Straitley has ever known, as Buckfast leads him (and the reader) through the events leading up to the death, beginning with the disappearance of her teenage brother, Conrad, when she was only five years old, and her search to discover the truth. This brings her, as a junior teacher, to take a job at King Henry’s School, St Oswald’s traditional rival, where Conrad vanished without trace nearly 20 years before. Faced with sexism, snobbery and the ghosts of her past, the young Rebecca Price is engulfed into a web of deception and lies, in which every one of her memories and every relationship is suspect.
I was a teacher for 15 years in a school rather like St Oswald’s. It was filled with stories, secrets and drama. Now that I’m no longer a part of that world, I found I couldn’t think of a better place to set a mystery story.
Rebecca Buckfast is not new to the School, having been part of the Crisis Team brought in the previous year to try to turn the School’s fortunes around. Now, as Head, she reveals herself to be a genuine force for change. Although he does not share the new Head’s vision for the School, Straitley views Buckfast as a worthy opponent, and looks forward to taking up her challenge – that is, until a group of pupils report finding what looks like human remains on the site of a new building project. Reporting the find to the new Head, Straitley is astonished to find that she already knows, and using his fierce loyalty to the School – which would surely not survive yet another scandal – as well as his desire to keep Scoones’ dark secret, Buckfast persuades Straitley to listen to her story.
2. What inspired the book?
6. If you could only read one book for the rest of your life which book would it be?
About the Book
Joanne kindly answered a few of my questions.
I read; I run; I have long bubble baths; and sometimes I fall down the Netflix hole and binge-watch box sets.
But Rebecca is here to make her mark. She’ll bury the past so deep it will evade even her own memory, just like she has done before. After all…