In a near-future Europe fracturing under climate change and far-right politics, biologist Lina Stephenson works in the remote Rila Mountains, safely away from London State. When an old enemy dies, Lina’s dangerous past resurfaces, putting her family’s lives at risk.
I started writing it around the time of Brexit & Trump, in a summer when the arctic was burning, with my daughter asking how we had got to this point, and me feeling utterly unable to answer. This Is Our Undoing isn’t about far-right politics (although that’s in there), or about climate change (although that’s in there too), because I didn’t feel I had the answers to those. Instead it’s about powerlessness, which I had plenty of, and how you stay true to yourself when the world feels full of darkness. I’d had the setting in my mind for a while, thinking the isolation and sweeping wilderness of the Rila Mountains were the perfect spot for a kind of ‘And Then There Were None’ eerie story, so the theme and the location just sort of fell into place together. I wanted to take an ‘ordinary’ sort of murdery suspense and make it about the importance, and the loneliness, of taking your small stand against the world.
I’m pretty new to all this, so I haven’t done too many interviews yet. But I guess I’d love to see more conversations about diversity in publishing and what we as individuals want to see happen to bring about change. I’d love that to be a normal question that gets asked of (white, cishet, ablebodied) people at any time. Not just during Black History Month, or in response to a #MeToo campaign. My answer would be that I have a tiny, tiny platform at the moment, and feel wholly unqualified to do very much, but I am writing the characters I wish I’d seen more of growing up as a mixed-race child of immigrants, and I am hoping to provide mentoring support to other under-represented writers as soon as I can figure out how/pluck up the courage. 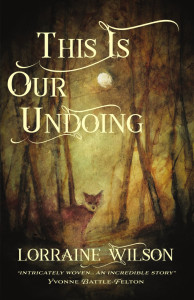 Could you condemn one child to save another?
7. I like to end my Q&As with the same question so here we go. During all the Q&As and interviews you’ve done what question have you not been asked that you wish had been asked – and what’s the answer?
1. Tell us a little about This Is Our Undoing.
It sounds daft, but the reality of having a book published is endlessly surprising to me. There have been so many set backs along my path to this point that I still can’t quite believe it’s actually going to happen.
Lorraine kindly answered a few of my questions.
3. Are you a plan, plan, plan writer or do you sit down and see where the words take you?
I’m more planner than pantser. I can never resist a graph – it’s my inner scientist – so I tend to do a lot of visual planning, things like character transformational arcs, 3 Act plots, mindmaps of the themes, subplot flowcharts etc. I also do a fair amount of background reading during the planning stage to help me build up a sense of my story’s world, its biology, weather, folklore, history, cultural mores and so on. But for all that planning, I think the only way to really discover your story is to write it, so my plans are never very fixed, they evolve as I write.
This Is Our Undoing is about a scientist called Lina whose safe haven – a remote research station in the Rila Mountains in Bulgaria – becomes a trap when an old enemy is murdered and his young son’s quest for revenge endangers her and her family’s lives. It’s set in a near-future Europe threatened by unrest and climate breakdown, and is full of vengeful children and dangerous secrets.
6. If you could only read one book for the rest of your life which book would it be?
But the forest is hiding its own threats and as a catastrophic storm closes in, Lina realises that if she is to save her family, she must become a monster.
5. What do you do when you aren’t writing? What do you do to relax and get away from it all?
2. What inspired the book?
Trapped with her vulnerable sister alongside the dead man’s family, Lina is facing pressure from all sides: her enemy’s eldest son is determined to destroy her in his search for vengeance, whilst his youngest carries a sinister secret…
Read, talk to the cats, garden, walk down to the shore and stare at the sea. I live with disabling illnesses which set limits on how much I can do, but as long as I have books and the sea I’m ok.
4. Is there anything about the process of publishing a book that surprised you?
Lorraine Wilson is the author of This Is Our Undoing which is published by Luna Press on 3 August 2021.
Oh that’s an impossible question! When I used to spend long field seasons living out of a rucksack in the middle of nowhere, I would have to choose two or three books to take and it was always agony. The complete works of Oscar Wilde saw me through a loooooong few months on my own in a rainforest, so I’d want something like that even though going for a complete works is totally cheating. I think I’d choose something in a language I don’t currently speak, or at least don’t speak well, so that I’d have to decode the book first – that would slow me up a bit!
About the Book