There was a varied mix of questions from the audience to round off the event covering topics such as audiobooks, potential film adaptations (David Tennant would play the hero obviously, with the author herself playing Shona), childhood reads, author influences and whether she’d had any feedback from people from other parts of Scotland which Shona, as a proud Edinburgh resident, tends to be rather scathing about! This was another really entertaining hour and I am looking forward to finding out where Shona goes next. We were given a bit of an exclusive as Olga Wojtas revealed the next book would take place in 1650. Now what big events were happening around that time…
Olga Wojtas gave a couple of readings from Miss Blaine’s Prefect and the Weird Sisters, the first being a visit by Marcia Blaine herself to Morningside Library. She was quite outraged at the inaccuracies in Shakespeare’s Macbeth and wanted a disclaimer included. The author explained that she was really drawn to the story of Macbeth when studying the play for Higher English but feels that many people think it is the true story. Through the book, she wanted to set the record straight and correct at least some of the inaccuracies. So for the first time, thanks to Shona, we have the true facts! (Disclaimer: this may not actually be true). There were certain scenes from the play she wanted to include and built the story around those.

I hope you have enjoyed my summary of yesterday’s events. I’ll be back at the book festival on Thursday when I’m seeing Patrick Gale talking about his wonderful book, Mother’s Boy.

Typical Scottish weather had resumed yesterday so it was perfect for the Press Office ducks! My first event in the morning was to see Alexander McCall Smith being interviewed by James Naughtie in Central Hall which is a short walk from the main book festival site. The title of the event was “A Writer for Good”.

I’m very grateful to have been given a press pass again this year. I have bought tickets for some events and have been allocated press tickets for a few more. Yesterday was my first day at events but first, let me take you back to Saturday evening.

I am a big fan of Olga Wojtas’s fictional heroine Shona McMonagle who works in Morningside Library and whose mantra is ‘never underestimate a librarian!’. Wojtas’ books are not like much of the Tartan Noir gritty crime fiction which dominates the bookshops crime section. Rather they are witty, very clever unconventional stories full of somewhat surreal humour. The author said that Shona reminds her of a labrador: good-hearted, bouncy and thick!
If you have read any of Alexander McCall Smith’s books you will know that there is a lot of humour in them and he spoke about how he feels that in a gloomy world, people need to believe that things can improve, that there is hope for something better. He feels that there are many positive people in the world, people who are optimistic and courteous, who value decency and he likes to portray that in his books.
Yes it’s that time of year when Edinburgh has lots of festivals taking place and this year is the first time since Covid that things have seemed pretty much back to normal. The streets are packed, there are tourists and street performers everywhere, people are handing out leaflets for their shows and there’s a real buzz about the place. And yes, I am complaining about how busy the buses are! However, in a slightly quieter part of Edinburgh, in the art college, the Edinburgh International Book Festival began last Saturday and is running until Monday 29th August. As usual, I’m going to a few events and will give you a flavour of what I’ve seen over the next couple of weeks.
Muriel Spark was a great inspiration to Olga Wojtas. The author attended James Gillespies High School (which Marcia Blaine’s School for Girls was based on) when The Prime of Miss Jean Brodie came out and remembers that the school was outraged when the film came out. It was clearly about one of the teachers who used to work there. Shona is equally outraged by this scandalous book bringing her school into disrepute. Olga Wojtas is a great fan of Muriel Spark’s writing and says that because Spark had also attended Gillespies and was writing about an Edinburgh familiar to her, it made her realise that writers could be ordinary people like her.

I’ve seen James Naughtie interview Alexander McCall Smith a few times now and they are a great combination. They are clearly friends and there is a warm rapport between them. This was a most enjoyable hour which seemed to go by very quickly. I’m sure that everyone left the hall with a smile on their face and feeling they had been well entertained.
Like most of the UK, Edinburgh has experienced a very hot and dry summer so it was perfect weather last Saturday for the opening party which took place in the grounds of the Edinburgh College of Art. Like many people, I was sad that Charlotte Square was no longer to be the home to the festival but I have to say I’m very impressed with this new location. I wasn’t at the festival last year as, although it did take place in a smaller way, I was still a little wary of crowds so this was my first experience. The site looks so pretty at night with lights on the trees. There are plenty of seats and tables and a large screen where many events are live streamed.
Alexander McCall Smith is a prolific writer and many of his recent releases were mentioned over the course of the event. We were treated to an extract from the latest Scotland Street serialisation which begins in The Scotsman newspaper soon. He said how fond he was of his characters who live in Scotland Street and it was clear that the audience are fond of them too, especially young Bertie. He revealed that the title of this book will be The Enigma of Garlic. I have to say that his titles are brilliant and really attract me to the books. His most recent Number 1. Ladies Detective Agency book is called A Song of Comfortable Chairs. A recent collection of short stories is The Exquisite Art of Getting Even and the latest Isabel Dalhousie novel is The Sweet Remnants of Summer.
There were so many wonderful anecdotes peppered throughout the interview and I especially liked hearing about how Ian Rankin and the late Tam Dalziel are among many real people who have made cameo appearances in Scotland Street. There was lots of laughter during the event both from the audience and from the author himself who has a very infectious laugh. In fact, James Naughtie said, “Nobody laughs at your jokes more than you do, which is one of the reasons we all adore you.”
It’s free to get into the site so anyone can come in and sit and watch whatever is on the screen. Quite a few events are being live streamed online too and I feel that this has made the book festival really accessible. Whether you can get to Edinburgh or not, whether you can afford to buy tickets or not, everyone can experience the festival in some way. There’s a bookshop and a signing tent and activities for children. If it’s a nice day, it’s a lovely place to just sit and soak up the atmosphere and see if you can spot any famous faces.
The other event I attended yesterday featured Olga Wojtas being interviewed by Jenny Brown. This was a sold out show in the Wee Red Bar venue. With the title of the event being Murder, Martial Arts and Macbeth, you could tell you were in for a very interesting hour. 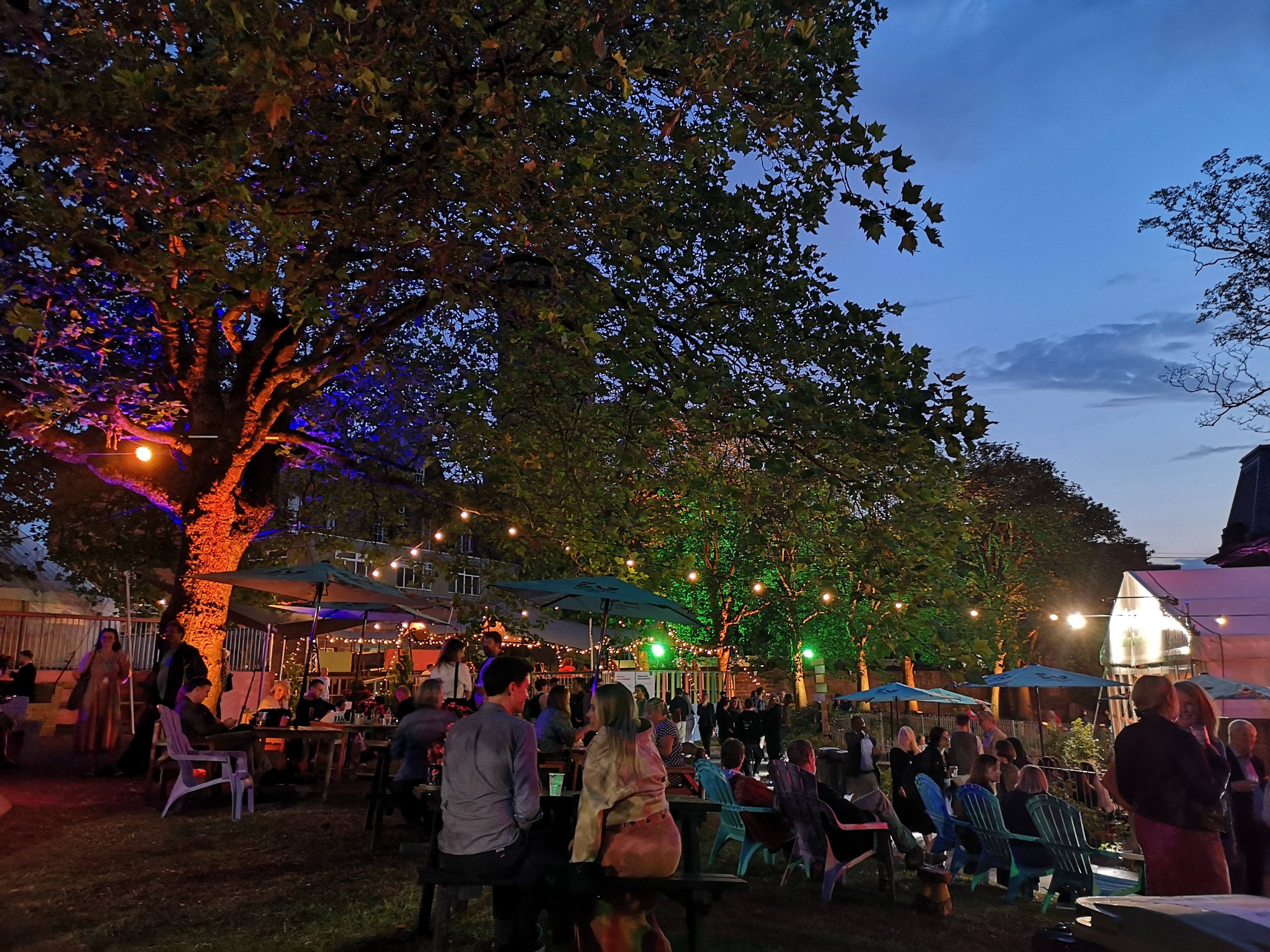