One thing I would say is that there’s no ‘right’ way of being published and getting your work out there. The ‘traditional’ way is to find an agent and then a publisher, but I went directly to a publisher and only later, off the back of that deal and the book, got an agent to represent me. There are obvious benefits to having an agent there in your corner from the very start, so I would ultimately recommend doing it that way around if you can, but I guess I just want people to know that it’s not impossible no matter what background you’re from and that there are ways ‘in’!
3. Are you a plan, plan, plan writer or do you sit down and see where the words take you?
Lauren Brown is anxious. And when she feels worried, she picks at her skin. Secretly, quietly, but increasingly compulsively, her skin-picking begins to affect her day-to-day life until she realizes she must unravel the reasons behind it.
7. I like to end my Q&As with the same question so here we go. During all the Q&As and interviews you’ve de what question have you not been asked that you wish had been asked – and what’s the answer?
Thoughtful, unsparing and at times darkly comic, Hands is the masterful debut of a luminous new talent. 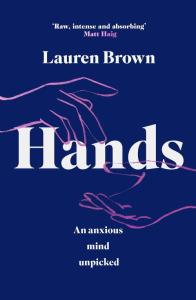