Author Links:The last thing he heard was the screams.As fear shredded through him, Steve felt someone grab a fistful of his hair and yank his head back. Then a strange coldness at his throat.Planes falling from the sky. Elevators plunging to earth. World markets collapsing.

They didn’t call Steve “pizza face,” on account of his acne; didn’t mock his uniform or leave smashed enchiritos all over the floor. His employees were better here too, more or less. The night shift included four sweet, albeit mischievous, teenage girls. All juniors or seniors, like the Taco Bell hooligans. Hell, like Steve himself only a few years ago, but somehow the girls treated him like he was their embarrassing dad. After only a few months on the job, he truly felt for their real fathers.
Steve studied the long checkout line, the new girl, Ella, fumbling at the register next to him. “We close in half an hour,” he said, exasperated. “Can’t you wait? I need you to take register three.”
It’s New Year’s Eve of 1999 when four teenagers working late are attacked at a Blockbuster video store in New Jersey. Only one survives. Police quickly identify a suspect, the boyfriend of one of the victims, who flees and is never seen again. 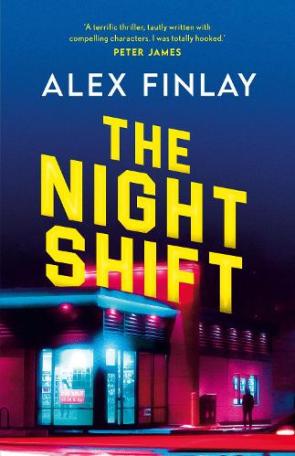 EXTRACT
But even she was a pain in the neck. Just an hour ago, he’d had to remind all the girls not to venture out to the parking lot alone. The buddy system—was that so friggin’ hard to grasp?
In the aftermath of the latest crime, three lives intersect: the lone survivor of the Blockbuster massacre, who is forced to relive the horrors of her tragedy; the brother of the fugitive accused, who is convinced the police have the wrong suspect; and FBI agent Sarah Keller, who must delve into the secrets of both nights to uncover the truth about the Night Shift Murders… 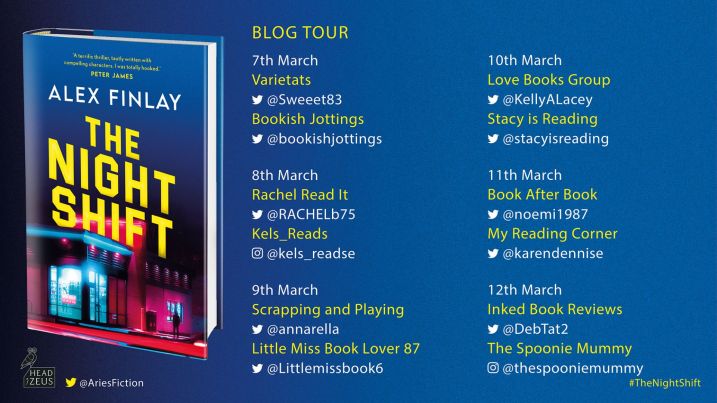 Steve shook his head as he reached around the theft censors at the door and handed the customer the small plastic bag full of movies.
Fifteen years later, four more teenagers are attacked at an ice cream store in the same town, and again only one makes it out alive.
The night was expected to bring tragedy. 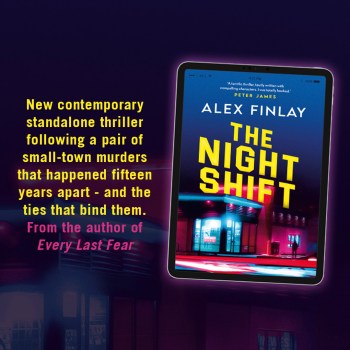 “I can cover for her,” Katie said, coming in from the cold, snowflakes in her hair, a pile of videos stacked in her arms from emptying the metal return receptacle stationed in the parking lot. She was the most responsible of the group, a Catholic school kid, a rule-follower.
ABOUT THE AUTHOR
Website | Facebook | Instagram | Goodreads | Amazon
Join the club.
By closing time, neither Candy nor Mandy had emerged. They’d be hearing about this. For sure. Not cool.
He was on the floor now, an ugly gurgle emanating from his neck. He watched as the figure turned out the break room lights. It felt like a small eternity before the door flew open, a burst of light filling the room. The sound of teenage chatter abruptly dying.
“But Steeevie,” Mandy said, lowering her voice to a whisper, “I have girl issues.”
“Dammit, girls,” he said to nobody, as he noticed the back door was open, the wind howling. If they were smoking out there, he swore to God . . . He’d told them a million times that for security they weren’t supposed to open the back door. Steve could get in big trouble with Corporate if somebody—He froze when he saw two sets of legs on the floor jutting out from behind the break room table.
But Y2K was an otherwise typical Friday night at the Blockbuster Video in Linden, New Jersey. Steve had been store manager for six months now, and it was sure as shit a step up from his last job at the Taco Bell. Where his clothes always smelled of cooked meat and grease, and where cadres of drunken teens arrived loudly around eleven until he kicked them out at 2 a.m.
He navigated through the shelves of tapes, past the newer section with DVDs, and to the break room. It was cold as hell in there.
“I think she was in the kids’ section,” Mandy said with a smirk as she sauntered off to the break room.
He’d go deal with the other two. Always something. He just wanted to get out of there, stop by Dad’s house for a Pabst to celebrate surviving another year before the old man fell asleep. Then maybe catch more beers at Corky’s Tavern, watch the ball drop on the TV behind the bar, see if there’d been any real chaos from the computer bug the news wouldn’t shut up about. Not exactly “party like it’s 1999”—if he never heard that song again it would be too soon—but it beat being alone at his crap apartment.
Steve instructed Ella to work the door, unlocking and locking the dead bolt to let customers out but ensuring no one got in. She could handle that much, he thought. He told Katie to close out the registers.

“Can I go on break?” Mandy said, shoving a VHS cartridge into the store’s machine. It was the bane of the job, proof that nobody read the Be kind, please rewind stickers on the tapes. Candy O’Shaughnessy was Mandy’s partner in crime, the other perpetrator of what the Blockbuster, Inc. Employee Handbook called “Class A violations.” Though the store was four thousand square feet of open space, Candy always managed to disappear. She constantly gave him attitude, and once smuggled wine coolers into the break room. And Steve remained convinced that she was the one who put Friday the 13th inside the box for 101 Dalmatians. Those parents had given him an earful. Said their kid would need therapy.
Alex Finlay is the pseudonym of Anthony Franze, an author who lives in Washington D.C. As Alex Finlay, he writes gripping psychological thrillers such as Every Last Fear. As Anthony Franze, he writes compelling legal thrillers including The Advocate’s Daughter, The Outsider and The Last Justice. He’s garnered national praise for his work as a lawyer in the Appellate and Supreme Court practice of a prominent Washington, D.C. law and he has been a commentator on high-court issues for The New Republic, Bloomberg, and National Law Journal.