Jane is a delight to read. Her cheery nature shines through. She marvels at the differences the countryside holds. Always eager to help she comes to understand that nature can be cruel but also that even this can be necessary at times. Her aunt and uncle clearly dote upon her and the reader feels for them as the year ends and Jane has to return home.
A charming tale that is a delight from start to finish. I envied Jane and her year in the country.
Jane soon makes friends with the rector’s children, and in turn with the children at the village school she starts to attend. She spends most of her time outdoors, spotting birds nests, picking flowers or helping sow plants in her uncle’s fields. She appreciates the hard work her aunt and uncle put into their everyday lives and it leads her to appreciate the hard work her father does, spending long hours at his job, so knows she should enjoy her time with her parents more.
The reader follows Jane as she learns to adjust to life in on a farm instead of the city. She compares the open fields with her garden at home and starts to cherish the countryside. As she improves in health, she begins to explore, discovering the animals her uncle raises, the woods and plants nearby and learns the wonders each season holds.
At last she reached the brow of the hill … now the country opened out below her and she looked down into a wide and lovely valley … Still patched with snow the little fields spread like a carpet below her and here and there a farmhouse with barns and golden ricks was clearly seen. Across the plain ran, straight as a ruler, a railway line and she saw a toy train puffing and crawling across the picture.
The story follows a full year and the reader see’s Jane’s discovery of what each month has to offer. It’s not just the joys of the natural world that Jane encounters but the everyday life of a small village compared to a large city. She sees Easter services, harvest festivals, picnics, travelling fairs and cutting and creating home made Christmas decorations. She gets to milk cows rather than just pour milk straight from a bottle and collect freshly laid eggs not eat ones from cartons. There’s the sense that Jane has been altered due to her year at the farm, that she will look back in fondness at it when she is an adult.
Malcolm Saville’s classic novel from 1946 is about eleven-year old Jane’s discovery of nature and country life during a year spent convalescing on her uncle’s farm, after having been dangerously ill in post-war London.  The novel is also a record of rural England eighty years ago, written by one of the great twentieth-century English nature writers.
Publication date – 18 January 2022
Source – review copy
Published by Handheld Press
Janet has been unwell. She is sent to live with her aunt and uncle at their farm in the countryside. There she learns to look after animals, recognise different plants and makes new friends. The reader follows Jane through her year of convalescence and the joy she finds in the countryside.
There’s a sense of bucolic idyll but also of the hard work and risk that was involved in farming. Jane’s Country Year is also a step back in time to a look at everyday life 80 years ago. 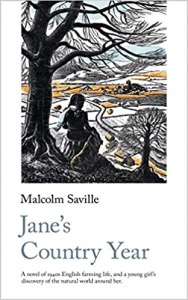