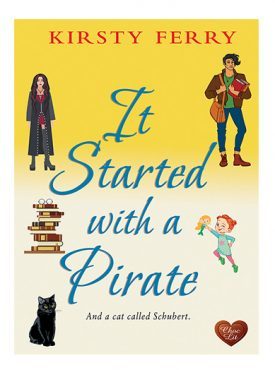 Coffee, cake and cats …
The idea behind this book is actually based on a fascinating true story. A primary school not that far from me was having its grounds excavated ahead of an extension. A skeleton found buried in the grounds and it is believed he could have been a pirate. You can read about that here: Skeleton under primary school
Billy has been landed with looking after his sister Nessa’s cat. If you’ve read any of the other books you’ll remember Nessa. We meet him dressed as a pirate (crossed with Bono c1987), about to give a talk to school children, he doesn’t feel that a fat black cat is going to add to his piratical look! Lexie Farrington walks into the café where he is desperately trying to get his brother to look after Schubert while he does his talk and somehow ends up catsitting and with a ticket to the talk. Lexie is a woman after my own heart – a genealogist with a fondness for cemeteries. I refer you to my first review of the year A Tomb With a View. I have to say that imagining Billy in the frock coat and black leather trousers outfit for his ghost tour at Greyfriars Kirkyard did make me feel a bit weak at the knees… It is at this graveyard where, thanks to a slight mishap with a magic potion created by his niece, Billy and Lexie meet Mhairi, a rather angry ghost from Orkney but with a connection to a pirate and Leith.
Kirsty Ferry is from the North East of England and lives there with her husband and son. She won the English Heritage/Belsay Hall National&nbsp;Creative Writing competition and has had articles and short stories published in various magazines. Her work also appears in several anthologies, incorporating such diverse themes as vampires, crime, angels and more.
Her day job involves sharing a building with an eclectic collection of ghosts, which can often prove rather interesting.
These are a few of Lexie Farrington’s favourite things, and when she walks into the Thistledean Café in Edinburgh, she’s delighted to find all three: coffee, cake, a big black cat on a purple lead being held by a very grumpy-looking pirate. Okay, maybe she wasn’t quite expecting that one …
When Lexie steps in, little does she realise that Billy will be the key to a hidden Edinburgh she would have never discovered herself, and he might also be the man to help solve a certain piratical puzzle of her own …
My thanks to Liz at ChocLit for my review copy of this book. It Started With a Pirate will be published next Tuesday, 16th February, and will be available in ebook and audiobook formats. You will find buying options for various platforms on the ChocLit website here: It Started With a Pirate
Kirsty Ferry writes such enjoyable books and has a great writing style. You get drawn in straight away and feel like her characters are real people, even though there is very often more than a hint of the spirit world and magic. Her books are warm and funny and a real treat and I loved this one too. By my reckoning, we’ve still to hear Alfie’s story so I’ll be looking forward to that one. Though I do think that young Isa is showing potential to star in a book too – just saying Kirsty!
As well as the mystery aspect of the book as Billy and Lexie try to find out how they can reunite Mhairi with her pirate love Luis, there is of course a little matter of romance in the present too. Schubert has a way of bringing people together and if ever there was a self satisfied cat, it’s Schubert! Even as someone who isn’t particularly fond of cats (sorry), I have to admit I’ve got a soft spot for Schubert.
I thoroughly enjoyed this novella – it’s great fun! There are old Edinburgh graveyards, buried pirates, a furious ghost and of course the black cat Schubert – what’s not to like? Add in the fact that I may have helped the author a little bit with the research, and I was pretty sure I was going to enjoy this book. I wasn’t disappointed. This is the fourth in the Schubert series the others being Every Witch Way,  A Christmas Secret and It Started with a Giggle. They are all standalone reads though focussing on one of the somewhat unusual and always entertaining McCreadie family. This time, Billy is the family member taking centre stage.
Kirsty loves writing ghostly mysteries and interweaving fact and fiction. The research is almost as much fun as writing the book itself, and if she can add a wonderful setting and a dollop of history, that’s even better.

Of course, Billy McCreadie isn’t really a pirate; he just knows a lot about them and is on his way to give a historical talk to school kids, hence the get-up. He’s also in desperate need of a cat sitter.!
From the back of the book
About the author 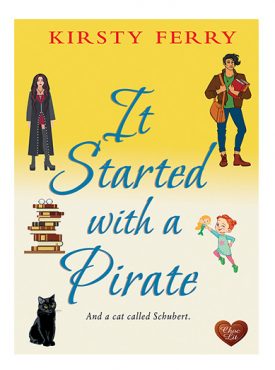