Valérie is glamourous, confident and potentially deadly. She is never knowingly underdressed, has hidden “skills” and has the makings of camouflage in her bag, so what if it’s actually a very expensive face mask. She also happens to have a dog more often than not in the bag too. She doesn’t ask Richard to get involved, she more or less tells him and he just goes along with it.
Richard is taciturn, begrudgingly lets guests stay at his B&B and much prefers to spend his time with his chickens or his beloved old films. He is reluctantly dragged into a murder investigation by Valérie, a guest who is more than she appears. He sound finds however that he is actually enjoying running around the countryside looking for villains. He’s no so keen on possibly being killed by the Mafia though. 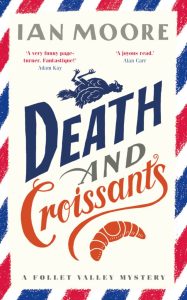 Littered with a host of amusing characters, from Madam Tablier the aptly named housekeeper to the rather “eccentric” fellow British B&B owners, Death and Croissants is a funny, entertaining light murder mystery. I look forward to read more investigations of Richard and Valérie in the future.
The setting is lovely. It’s hard to imagine the rivers and vineyards of the French countryside to be overrun by killers but the juxtaposition works well. The mystery itself is engaging and just convoluted enough to make the story wind this way and that and still make sense.
Source – review copy
Published by Farrago
Publication date – 1 July 2021
The main thing I found when I was reading the book was how much fun I was having. It was a pleasure to pick up and spend a little more time with Richard and Valérie and sometimes that is all that you need in a book. It is clear that the author had fun writing it too.
Richard is a middle-aged Englishman who runs a B&B in the fictional Val de Follet in the Loire Valley. Nothing ever happens to Richard, and really that’s the way he likes it.
Richard remains a dazed passenger in the case until things become really serious and someone murders Ava Gardner, one of his beloved hens… and you don’t mess with a fellow’s hens!
There is humour throughout, with Richard bearing the brunt of the jokes. He does seem to get himself in scrapes, if you can call hunting for an old man who may have been murdered a scrape. He finds he’s caught up before he knows it but soon realises he’s having more fun than he has in years and that Valérie and her unorthodox ways have given him a new lease of life.
Richard runs a B&B in the Loire Valley, tends his chickens and puts up with a perpetually irate housekeeper. Life would be good if it wasn’t for the guests. When one of them manages to disappear, leaving behind a bloody handprint, another of the guests, the glamourous Valerie decides that she has to figure out what has happened, and that Richard has to help her.
One day, however, one of his older guests disappears, leaving behind a bloody handprint on the wallpaper. Another guest, the exotic Valérie, persuades a reluctant Richard to join her in investigating the disappearance.