6. I like to end my Q&As with the same question so here we go. During all the Q&As and interviews you’ve done what question have you not been asked that you wish had been asked – and what’s the answer?
You wake up.
You can’t remember what happened.
The man lying next to you is not your husband.
And he’s not breathing . . .
Told in alternating chapters, it is half police procedural, and half a series of letters written by Louise to her husband, in an effort both to explain to him what happened, and to try to work out how things ended up as they did.
Which I then don’t look at again and diverge from massively! I think this happens for a few reasons, but the main one is that it’s hard to tell what the reader will be feeling or experiencing in a book from a plan. Once actually writing, it’s more like going through it with them and realising that, for example, you need another reveal here; or that tense scene there.
And he’s dead . . .
I suppose I’d love to be asked about being a single parent, because I do a ton of that. I’m lucky to have a very supportive ex who sees his son a lot, but it’s definitely an interesting balance. Dating is also hilarious. There’s nothing more calculated to test a new relationship than your son turning up at your boyfriend’s house and declaring he needs a poo.
And then, as I so often do, I took that experience – and took it to the worst, most extreme version of it. To the death of a man and a fear of having killed him.
Gytha kindly answered a few of my questions.
Jonah Sheens and his team are then left with a lot of questions to answer as they attempt to work out what happened to Alex. The truth lies in the hazy events of the night before, but the events of that night didn’t really begin there. In fact, they began when Louise first met her husband, her best friend, and the drunk version of herself, all on one night.
I’m also a massive cryptic crossword nut, and when I get round to it I love to play the piano. I’m so keen to get back to singing at some point this year. It was nearly what I did as a career until I realised I was too much a writer at heart.
About the Author
Gosh, loads! I’m definitely more familiar with the process from my end and how I work with my amazing publishing team. But there are things that I never realise need taking into account until they happen. Things like how retailers work, and international rules on publication dates, and others. And honestly, don’t ever ask me to explain a royalty statement…
Gytha Lodge is a writer and multi-award-winning playwright who lives in Cambridge. After studying creative writing at UEA, she was shortlisted for the Yeovil Literary Prize and the Arts’ Council England fiction awards, and developed a large online following for her young adult and children’s writing, with over seven million reads accrued on platform Wattpad. She Lies in Wait, her debut novel, was a Richard & Judy Book Club Pick.
2. What inspired the book?
6. If you could only read one book for the rest of your life which book would it be?
I’d say I’m a bit of a hybrid. I generally start with a basic plan, which is largely just a little about each character and some basic structural stuff which I colour-code with felt tip pens (I LOVE doing this). I generally then write a chapter by chapter summary… 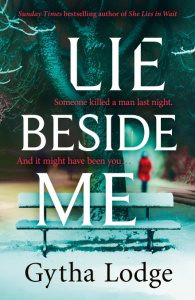 Gytha Lodge is the author of She Lies in Wait and Watching from the Dark. Her latest novel, Lie Beside Me, is published by Michael Joseph on 18 March 2021.
5. What do you do when you aren’t writing? What do you do to relax and get away from it all?
3. Are you a plan, plan, plan writer or do you sit down and see where the words take you?
1. Tell us a little about Lie Beside Me.
About the Book
It’s clear that the young man, Alex, has been murdered, and Louise immediately panics. Unaware of what she (or her out-of-control persona, Drunk Louise) might have done, she frantically tries to hide the truth.
This is a genius question. Naturally I immediately blanked. Typical writer 😉
But it’s not Niall who’s lying beside her. In fact, she’s never seen this man before.
Louise wakes up. Her head aches, her mouth is dry, her memory is fuzzy. But she suspects she’s done something bad.
I was actually thinking of writing something completely different for Jonah Sheens book 3, but didn’t feel like my other idea was gasp-worthy enough. I decided I wanted to find something that made the hairs on the back of my neck stand up, and as someone who some while ago experienced a morning after where I was afraid something awful had happened, I realised that this was the idea I wanted to pursue.
Lie Beside Me centres on Louise Reakes’s awful awakening. Following a heavy night of drinking, which she doesn’t really remember, she wakes in her bed at home and rolls over to cuddle her husband. Only to find that the man next to her is a stranger, and is dead.
She rolls over towards her husband, Niall. The man who, until recently, made her feel loved.
I also love to get out and exercise. Having spent 17 years rowing or coaching it or both, I have finally taken a step back after taking up tennis and realising that I really wanted to do a lot more of it. I love to climb, too, though it’s been an awfully long time thanks to two injuries and then lockdown. I would really, really love to get back to it.
Aside from reading, which is sometimes really lovely work (books I should read) and can also just be fun, I am an avid gamer – though my 10-year-old now largely monopolises the big gaming PC.
4. Lie Beside Me is your third novel. Is there anything about the process of publishing a book that still surprises you?
Oh no! This is so so hard to answer! I might have to choose partly based on length, and offer up two: Wolf Hall, and Jonathan Strange and Mr Norrell. Totally different genres but both with a glorious historical element and enough complexity to keep me engrossed for a long time.
As Louise desperately struggles to piece her memories back together, it’s clear to Detective Jonah Sheens and his team that she is their prime suspect – though they soon find she’s not the only one with something to hide.

Did she do it? And, if not, can they catch the real killer before they strike again?