The characterisations in this book are superb and three-dimensional. As Delphine narrates her story we are able to see how each character helps to effect the change in her. New friends bring her out of herself, get her singing, playing music, and learning again after giving up so much when she had Em. I loved all the characters but I had a real soft spot for Letty, an elderly woman whom Em speaks French with, and who was hilariously acerbic whilst also giving Delphine some much needed self-confidence. This is very much a story of female strength, both the inner strength that Delphine must find everyday, and the strength her new friendships provide.

Beth lives in London with her husband, two sons and a dog named Polly.

Em & Me is completely and utterly glorious, and I didn’t want to put it down. I was enthralled from start to finish, thoroughly immersed in Delphine’s life and her world. I think this is the kind of story that, when done well, is unforgettable, and that’s what Em & Me is for me. I want to step inside the book, be a part of Delphine’s new circle of friends, go to the jazz nights at Merhaba – the café where she works and now performs, meet Dylan from her band and his dog, Bernadette, and sit around a piano with her, her father and Em. I adored this uplifting, inspiring and joyous book. 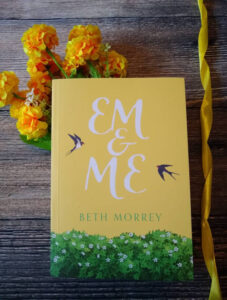 Em & Me is Beth Morrey’s second novel. Despite having a lovely hardback copy of Saving Missy on my TBR pile I have yet to pick it up and I’m feeling rather annoyed with myself about it as Em & Me is absolutely wonderful and beautifully written, with characters and settings that leap right off the page.

I’m delighted to be sharing my review of Em & Me by Beth Morrey today as part of the blog tour. My thanks to Susanna Peden from Harper Collins for the lovely proof copy of the book and the place on the tour. Em & Me is available now in hardcover, eBook and audiobook.
Delphine begins to remember what it’s like to want more: rediscovering her singing voice, opening herself to friendship, and reviving not only her mother’s roots, but her mother’s memories. As her life begins to fill with colour, can she be brave for herself and for Em? And what would happen if she finally told the truth?

For too long – since the sudden death of her mother as a teenager, since the birth of her daughter, Em, when she was just seventeen – Delphine has been unable to let go of the past, obsessed with protecting Em and clinging to a secret that could ruin everything. She’s been living life in safe shades of grey.

A mother.
A daughter.
A secret waiting to be discovered. 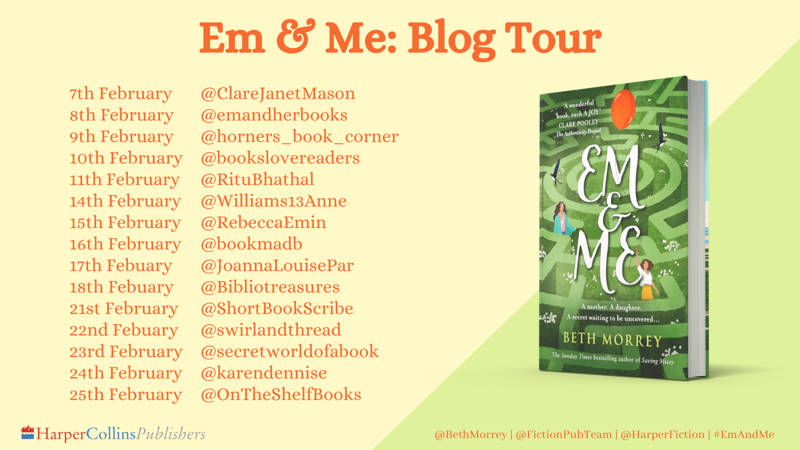 The day that Delphine finally stands up for herself is the day that changes everything.
Beth Morrey was inspired to write her debut novel while pushing a pram round her local park during maternity leave. Getting to know dog owners, joggers and families, she began to sow the seeds of a novel about a woman saved by her community, strangers who became friends.
A big-hearted, hopeful novel about finding second chances – and taking them.

The ‘Me’ is Delphine Jones. Her beloved French mother died when she was 13 and her life consists of herself, her clever daughter Em, and her father who is still struggling with his grief. To say their life is hard is an understatement but Delphine is proud and determined to cope. There’s a big difference between surviving and thriving though and what was so special about this book was witnessing the awakening that Delphine experiences as she gradually realises her life can be so much more.