A Child of the East End is published today by Corvus, in paperback original, priced £8.99.
In 2006, when I won the Harry Bowling prize I signed my first contract with Orion for my East London post-war nurses series. I moved to Atlantic in 2016, who re-published my East London Nolan Family Victorian sagas and my best-selling WW2 Ration Book series, featuring the boisterous East London Brogan family. I have a total of nineteen published novels and a non-fiction autobiography of growing up in the East End during the 50s, 60s and early 70s.

Life in Cockney London was tough in the post-war years. The government’s broken promises had led to a chronic housing shortage, rampant crime and families living in squalor. But one thing prevailed: the unbeatable spirit of the East End, a tight-knit community who pulled through the dark times with humour and heart. 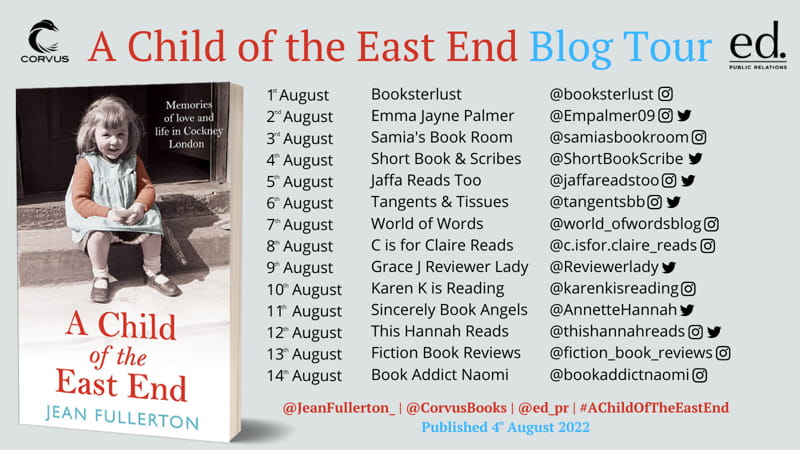 And she was right.

They were designed to cater for all members of the family, all day and in all weathers, from the moment you arrived until you waved them goodbye a week later. As we didn’t have a car, we used to travel to the holiday camp on a Grey-Green coach, which picked us and other holidaymakers up from the Old Globe Pub at Mile End for the three-hour journey to our destination. 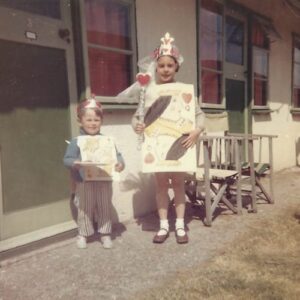 The chalets creaked in the slightest of breezes and no matter how much my mother swept our home-away-from-home, there was always sand on the floor. Truthfully, it was pretty basic, but for the thousands of working-class people who had been born and raised in damp, over-crowded houses and who flocked to holiday camps during the fifties and sixties, the accommodation was close to luxury. And as my mum always maintained, ‘You only slept in ’em.’
It’s my stop on the blog tour for A Child of the East End by Jean Fullerton and I’m sharing a fabulous extract with you today, publication day! Congratulations Jean. My thanks to Rebecca Mortimer from edpr for asking me to be a part of the tour.
Drawing on both family history and her own memories of growing up in the 1950s and ’60s, as well as her working life as a district nurse and local police officer, Jean Fullerton vividly depicts this fascinating part of London – from tin baths, to jellied eels, to tigers in a Wapping warehouse.
The purveyors of this twenty-four-hour fun fest were young men and women wearing dazzling white shorts and bright blue blazers. Upon arrival, it was they who directed you to your one-room family chalet, which was in reality nothing more than a wooden shed. These huts were covered with a lick of paint, and contained a single wash basin and the bare minimum of furniture. Children used a pot stored under their bunks if they were caught short at night, whereas adults had to dash to the nearest toilet block in their nightclothes.
Until Nov 2015 I was a qualified district nurse with a BSc in Community Nursing and a MSC in Teaching and Leadership. I am also a member of the Queen’s Nurses’ Institute and spent my entire nursing career in East London.
Although my father was reluctant to spend money, he did feel a family holiday was a must – and he and my mum had taken one every year since they married. Their accommodation of choice was typical of the time, a privately run boarding house which offered a clean room, breakfast and an evening meal. In return, you were expected to be respectable, considerate to other guests and out of the house all day.
Taking your summer break in a holiday camp was a full-time occupation. The day kicked off bright and early at about seven with the entertainment manager’s voice blasting out from one of the many loudspeakers fixed around the site – ‘Good morning, campers!’ The morning’s greeting was followed by a list of the day’s activity.
One of my first East London memories is lying in bed, listening to the low boom of the barges as they nudged each other on the Thames, just half a mile away from our estate . . .

Legend has it that it was upon seeing a bedraggled family of four sheltering from the rain because they’d been exiled from their boarding house for the day that Billy Butlin hit on the idea of holiday camps. Possibly, but what I can say is that trying to keep children amused all day in a damp seaside town is no holiday.

My parents carried on with the boarding houses for a couple of years after I was born, but then they discovered Warner’s Holiday Camps.

I now live in Bedford with my very own Hero@Home who is a rector in the Church of England. I have three daughters and eight grandchildren plus an elderly, very affectionate cat. When I’m not tapping at my key board I enjoy travelling, walks in the country and socialising with friends and family.
Jean and her brother in fancy dress on holiday 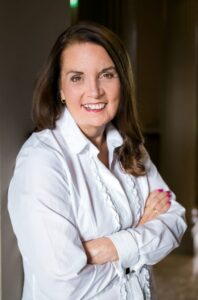 I was born within the sound of Bow Bells in Whitechapel and my family have lived in East London since the 1820s.