Links:
To get to the root of Sigurd’s disappearance, Sara must question everything she knows about their relationship. But can she trust her own thoughts? And where is she safe?
Sara was not a likeable character, but as a therapist, I enjoyed seeing the way her mind worked. As the police investigation continues into Sigourd’s disappearance, strange things continue to happen around Sara. So much so that she starts to doubt herself. We didn’t hear to much about the investigation from the police side of things and as their suspicions are told to Sara, this is when we learn about them. The fact that a Sigourd left a message on Sara’s phone to say he arrived to see his friends makes this all the more strange and makes the reader question, why Sigourd lied? For the first half of the book, I didn’t have any suspects, which is odd as usually I suspect everybody. As I got into the second half of the book, more suspects appeared.
Thank you to Netgalley and Spiderline publishers for my copy of this book. I love psychological thrillers and even the name of this one had me hooked from the beginning.
The writing and translation of this book was excellent. If it wasn’t based in Norway with Scandinavian names, then I would not know it was not originally written in English. I have read quite a few Scandi Noir books over the years and I was not disppointed with this one. The ending of the book was very good and I felt satisfied that all ends were tied up.
Sara is irritated by what she thinks is a practical joke. But as the hours stretch out, her anger turns to fear, and the large empty house begins to feel increasingly threatening.

I love the strapline to this novel – “The truth is inside her head“. Sara is a therapist, treating her patients in her office at home. Her husband Sigourd is supposed to be renovating their big old inherited house. But Sigourd is so busy with his work, he doesn’t get around to doing much renovating. He needs a break away with the boys for the weekend, so Sara is home alone. But when Sara gets a call to say Sigourd never arrived, things start to unravel. At first Sara thinks its a weird stupid joke from the friends of her Husband, friends she never really liked. But as the hours pass, Sara gets worried.
From the mind of a psychologist comes a chilling domestic thriller that gets under your skin.
What happens when a psychologist begins to question her own sanity?
Description:
Author Helene Flood is a psychologist herself. The book has already had been bought for film rights, which I look forward to seeing. She also has another book due out next year which I look forward to hearing about.
Like Loading…

Sara runs a private psychology practice for troubled youth in the newly inherited house she is refurbishing with her husband, Sigurd. One morning, a voicemail from Sigurd tells Sara he’s arrived at a holiday cabin for a weekend away with the guys. A couple of hours later, Sigurd’s friends call from the cabin asking where he is — according to them, Sigurd never arrived. 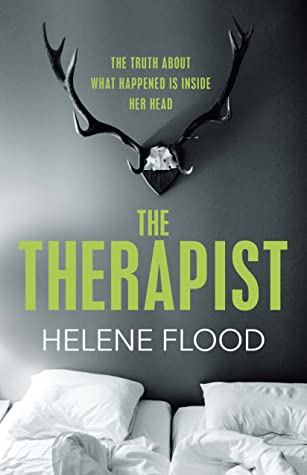