As well as it being rather unusual for father and son to be dating the same woman, this is something of a dysfunctional family with several of them not speaking or even contactable for a year at a time! There’s also the grandad, aging lothario George, with quite a story to tell and a family feud going on there. Then there’s Damien. I’m not even going to tell you how they both fit into the story.
Does the best man win? Well, depends who you think is the best man really! Three’s a Crowd is a fun romp of a read. It would make a fabulous film! Now then, who to cast?
Three’s a Crowd is a most unusual romcom, not least because the author is a man. Perhaps because of that, we do get more focus on the male point of view than is generally found in romantic fiction. This gives this book a fresh new perspective.My thoughts
Three’s a Crowd is published by Simon & Schuster UK and available now as an ebook.
The paperback edition will be published in October this year.
Author and screenwriter Simon Booker writes crime novels and prime time TV drama for the BBC, ITV and US TV. He is also Writer in Residence at HMP Grendon.  His TV credits include BBC1’s Inspector Lynley Mysteries, Holby City and The Mrs Bradley Mysteries; ITV thrillers The Stepfather and The Blind Date; and Perfect Strangers, the CBS romantic comedy starring Rob Lowe and Anna Friel.  Simon lives in London and Deal. His partner is fellow crime writer and Killer Women co-founder Mel McGrath. They often discuss murder methods over breakfast. Three’s a Crowd is his first contemporary fiction novel.
Harriet is an aspiring actress who is working as a barista. Tom is a would be musicals writer who meets her at the café and is rather attracted to her. Richard is his father who is a DJ and meets Harriet through his work. With Tom and Richard being estranged and Richard having taken a different surname for work purposes, Harriet initially has no idea that they are related and that she’s involved with father and son. Once they all find out, that’s when the fun begins.
Out-of-work actor Harriet is recuperating from a crash-and-burn affair with Damian – aka ‘Cockweasel’ – and making ends meet as a barista when she meets two rather lovely men. Tom is a regular at the café, and seems like such a nice guy. Smooth-talking DJ Richard is older, but in great shape – a real silver fox.

Deciding to take a chance on both of them, Harriet doesn’t realise at first that she is actually dating father and son. Tom and Richard aren’t on speaking terms, and don’t share a last name – so how was she to know? By the time everyone finds out, both Tom and Richard are truly madly deeply in love with Harriet, and she’s faced with an impossible choice.

But as the battle for her affections intensifies, ‘Cockweasel’ makes an unexpected reappearance and begs her to give him another chance…
About the Book
I heard about this book at an online event last year and thought it sounded like good fun. I’ve had my own copy sitting waiting on my Kindle since the beginning of this year and finally got around to reading it on my recent holiday. And I was right, it is fun!

About the Author
What happens when an estranged father and son unwittingly fall in love with the same woman? 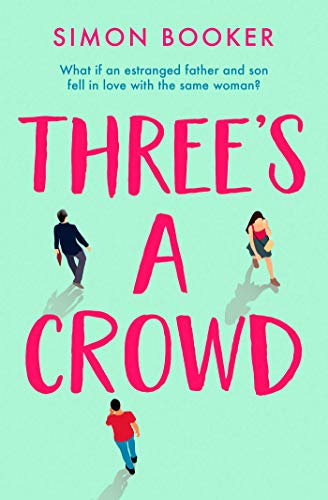