And now he wants Hannah.
Which is exactly how she’s planned it.
6. If you could only read one book for the rest of your life which book would it be?
There’s a spark between them from the moment they meet. Even Hannah can’t resist a man like Ricky for long.
It’s also a story about Ricky. Ricky is anything but shy. Rich, charming, good-looking, Ricky has never had a problem getting what he wants.
This is a story about Hannah. She seems shy. Some would even say spiky. People don’t pay much attention to Hannah.
4. You’ve written over 80 books. Is there anything about the process of publishing a book that still surprises you?
Oh yeah. Every book is like the first book in a sense. No two publishers are alike, and no two books follow the same trajectory. I’ve published books where the person who acquired it didn’t even read the book, they simply handed it off to a freelance copy editor and left it to the team to handle it. Taking that as the lowest possible involvement, I’d say that A Kiss After Dying marks the highest peak I’ve experienced so far in my career. The entire team at Penguin Michael Joseph, starting with my publisher and editor Joel Richardson, editor Grace Long, and everyone else, had such love and enthusiasm for this book! For every book I’ve published, I’ve received the customary marketing and PR plan, which usually runs into several pages, listing all the various things the publisher plans to do to promote the book. Drawing up that plan (usually copied from a template) and sending it to the author, is pretty much all most publishers actually do! In the case of A Kiss After Dying, it was the opposite. I don’t recall just getting a three page plan; it was constant and relentless, and still continues, even after publication. Every day, someone or other from Penguin Michael Joseph would email me about an interview request (like this one!), a blurb, a podcast, social media promotion, blog tour, an article, an essay…the team was so active, so hard-working, it was amazing. Add to that the PR firm Media Hive headed by Rishma Dhaliwal which is going hammer and tongs to make sure both the book and I, as a thriller debut author, get whatever attention we can drum up. There are a lot of books out every day, a bunch of them really good ones by terrific authors, and the hardest part of being published is getting your book noticed in the maddening crowd. That struggle is half won if you’re published well. I have to say that A Kiss After Dying ranks as my best published book, and the credit for that goes entirely to Joel Richardson and the amazing team at Penguin Michael Joseph. 80 books (and counting) and I’ve never been published this well in my life before now! I could get used to this! Lol.
In fact, it’s a little like Hannah. First you’ll be intrigued. But you’ll soon realise she knows something you don’t.
Over an 80 book career, I’ve followed every kind of writing strategy. Whatever works for the book at hand, I’m willing to try. I’m a great believer in reinvention. I’m not interested in rewriting the same book, or even writing new books in the same way each time. I want every book to be an adventure! So with A Kiss After Dying, I consciously se out to write it in a certain voice and style that isn’t my usual voice and style. It’s Hannah’s, the first person protagonist. As for the plan, yes, A Kiss After Dying was carefully and meticulously planned out and structured, but within that structured plan, I went wild with plotting, detail and characterisation! That’s the whole point of writing, isn’t it? To have as much fun writing it as the reader will have when they read it! It was a rocking good time.
5. What do you do when you aren’t writing? What do you do to relax and get away from it all? 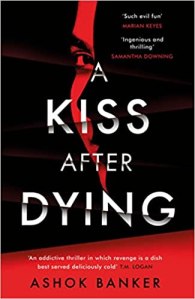 I had heard of but never actually read the classic crime novel A Kiss Before Dying by Ira Levin. When I picked up a copy some years ago, I was struck by how well it held up as a thriller and how so many elements echoed many issues today: toxic masculinity, male entitlement and privilege, misogyny, extreme capitalism. Something sparked in me. I wasn’t interested in rehashing Levin’s classic but I saw a way to use the structure of his noir masterpiece to tell a story I’d carried with me for a long time. I guess you could say that A Kiss After Dying is a gender-flipped, millennial+GenZ rift on Levin’s book, but it grew into something much more in the writing. The themes that made the Levin’s book so topical are still there, but the story takes very different twists and turns–including the central shocker of my novel, which I’m pleased to say, none of the readers who’ve reviewed it yet, or even my publishers, could see coming until it hit them! Yay!
Over 80 books, and a bunch of other writing – articles, news features, television scriptwriting – I’ve been asked pretty much every question I can think of. But if I had to pick one I wish I’d been asked, it would be Why do you write? My answer would be two favorite quotes, one from Erica Jong: ‘We write as leaves breathe: to live’ and the other from Gerald Manley Hopkins: ‘What I do is me: for that I came’.
And then, when you least expect it, that spark between them will go up in flames . . .
2. What inspired the book?
1. Tell us a little about A Kiss After Dying.
About the Book
A Kiss After Dying is a thriller about Hannah, a young woman seeking revenge against billionaire Roger Cordry whom she believes killed her father and brother and drove her mother to suicide. She’s made it her life’s mission to punish him in a manner befitting his crimes. First destroy his family, then kill him. She first appears in Zurich, Switzerland, where Cordry’s eldest son Ricky is a student. Hannah’s plan is to seduce Ricky, get close to him, and when the time is right, kill him. After that, she intends to go after his brother Monty in San Francisco. And finally, she’s going to do the same thing with Roger Cordry himself. At least, that’s her plan. But the best laid plans of mice and men go awry, and life complicates Hannah’s mission of revenge. For one thing, she hadn’t planned to actually getting emotionally involved with either Ricky or Monty, or considered the possibility that they might not be as evil as their ruthless father. A Kiss After Dying is about Hannah’s plan and how she achieves — or fails to achieve — her vengeance.
I’m a family man and a lifelong stay-at-home dad and now grand-dad. I love kids, every aspect of them, and am a natural born caregiver. I’m the person you would want babysitting your kids any time! My free time is spent on my hands and knees playing with the 3 year old, or at the pool (it’s a lovely summer here in sunny California) or at the park. We’re sorta-kinda famous at our local park because all the kids love me and the adults adore my grand daughter and we have such a great time! When I’m not doing kiddie stuff, I’m drawing and painting. I recently taught myself to draw and paint and am now writing and illustrating my own children’s books and graphic novels, as well as planning an exhibition of my work at some point. Family, art and lit, that’s my whole life right there in three words!
3. Are you a plan, plan, plan writer or do you sit down and see where the words take you?
Ashok Banker is the author of over 80 novels. Their latest novel, A Kiss After Dying, was published by Michael Joseph on 23 June 2022.
But this is not a love story.
This is an odd thing to say because I’m not religious or even spiritual in the usual sense of the word, but I’ve read and reread too many books for any one book to ever satisfy me over multiple rereads, so if I really had to stick with just one book, it would have to be The Bible, both the Old and New Testaments together. It is the only text that satisfies, comforts and rewards every time one rereads it, and even if I’m not religious, there is such wisdom, truth and great storytelling in it. After all, the word Bible itself comes from the Greek word for book, Byblos. So it is The Book.
7. I like to end my Q&As with the same question so here we go. During all the Q&As and interviews you’ve done what question have you not been asked that you wish had been asked – and what’s the answer?
Ashok kindly answered a few of my questions.