Extra shifts at a local hotel, favours called in from old friends, and, reluctantly, a lodger. Could rude, hilarious, brown-eyed Xander be the answer to her problems? Or is he just going to come in and start changing things?
The book is quite gently paced as we get to know Amelie and those circumstances that led to her living along in Cornflower Cottage. It’s such an important place for her, so full of memories but she really is struggling to afford it on her hotel chambermaid’s wages. When a storm leaves a huge repair bill in its wake she has no choice but to look at other ways to raise some cash and taking in conservationist Xander and his girlfriend Imogen seems the way to go. This does not go down with her boyfriend Decker, an unpleasant character if ever there was one!The trouble is that it’s falling apart, and she’s struggling to make ends meet. The garden is a jungle of weeds, the roof leaks, the boiler is broken. Determined to keep hold of the home that is her last link to her parents, Amelie decides it’s time to take action.I found it amusing that both the couples – Amelie and Decker, Xander and Imogen – seemed so unsuited to each other. Amelie with her love of nature seemed a much more natural partner for Xander. It was interesting to follow their will-they-won’t-they relationship which really could have been should-they-shouldn’t-they since they were both in other relationships. As a reader, I know what I wanted and expected to happen but with the complications of existing relationships, it was far from clear how this could happen.About the AuthorI particularly enjoyed the focus on nature in the book. The countryside surrounding remote Cornflower Cottage sounded just beautiful and I enjoyed reading about the nature which Amelie so loved. It was so lovely that she had inherited this love and respect for nature from her parents. It made me smile when her mum used to take her for a walk to see what animals were abroad and how the young Amelie had misinterpreted this!A completely beautiful romantic comedy about being brave, following your heart and moving on. Fans of Holly Martin, Jessica Redland and Nicola May will be swept away by A Home at Cornflower Cottage. Escape to the flower-filled fields and hedgerows of the Cotswold countryside, to a tiny cottage and a summer that could change everything….
My Thoughts
A Home at Cornflower Cottage is a sweet, slow-burn romance, perfect to read sitting in the sunshine in the garden, listening to the birds sing.
Amelie will never give up Cornflower Cottage, marooned in its island of wild fields and thick woodland. She did her homework at the scrubbed kitchen table and helped her mother hang washing on the line from the old oak tree. And when her beloved parents died, Cornflower Cottage became Amelie’s armour against the world.
Doesn’t Cornflower Cottage just look idyllic from that front cover? Well it might look gorgeous but for Amelie it’s a bit of a money pit. As you’ve read above, she inherited the cottage after her parents’ death and at quite a young age, this naturally shook her world. Cornflower Cottage became her rock, her place of stability and security in an uncertain world and she was determined to keep her memories of her parents close and continue to live there.
Tilly also writes young adult fiction as Sharon Sant. Find out more about Tilly and how to join her mailing list for news and exclusives at http://www.tillytennant.com
It’s been quite a while since I read a Tilly Tennant book. You’ll find reviews for a few of her books on my blog and my personal favourite so far is A Very Vintage Christmas with its references to my favourite film, It’s A Wonderful Life. However, A Home at Cornflower Cottage has a much more summery feel as you can tell by that lovely cover. Let’s find out what the book is about.
Just as Amelie manages to save the cottage from total collapse, and she starts getting used to the sound of laughter in her cosy farmhouse kitchen, a face from Xander’s past appears and Amelie’s future in the home she loves is shaken once again.
Can Amelie find a way to save her home and protect her heart? Can she trust Xander, or was the spark between them just in her imagination?

Tilly Tennant was born in Dorset, the oldest of four children, but now lives in Staffordshire with a family of her own. After years of dismal and disastrous jobs, including paper plate stacking, shop assistant, newspaper promotions and waitressing (she never could carry a bowl of soup without spilling a bit), she decided to indulge her passion for the written word by embarking on a degree in English and creative writing. She wrote a novel in 2007 during her first summer break at university and hasn’t stopped writing since. She also works as a freelance fiction editor and part-time lecturer.
Thanks to Noelle at Bookouture for having me as part of the tour. A Home at Cornflower Cottage is published today and you can order your copy here: A Home at Cornflower Cottage
Hopelessly Devoted to Holden Finn was her debut novel; published in 2014 it was an Amazon bestseller in both the UK and Australia. In 2016 she signed to the hugely successful Bookouture and is currently working on her fifteenth Tilly Tennant novel. Christmas bestseller A Very Vintage Christmas has just been made into a movie for Lifetime Channel. 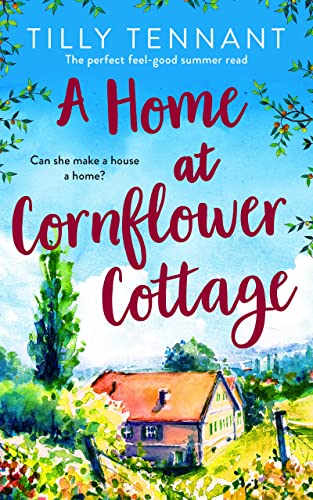