6. If you could only read one book for the rest of your life which book would it be?
3. Are you a plan, plan, plan writer or do you sit down and see where the words take you?
In such a scenario I would probably dedicate the rest of my life to fighting whatever nefarious dictator or power structure were denying me access to more books, so I might not have the opportunity to read that one book, whatever it were.
Hermetica starts off with Dase finding a piece of newspaper that shouldn’t be there. Dase is a passenger on a generation ship that’s going to take a few hundred years to make it to another star system. They’ve spent their entire life on this ship and they’re not going to live long enough to see the destination. They’re confused; they’ve never seen paper before, and the things written on the paper don’t seem to make sense. They begin questioning their role on the ship, which is managed by AI, completely compartmentalized. It’s a life, an authority, Dase has always chafed under, but now they’re beginning to take steps to define their own path.
Alan Lea’s novel Hermetica was published by Detritus Books on 1 October 2021.
I wrote Hermetica during the first confinement, so that experience of claustrophobia is certainly present in the book (it’s not a claustrophobic read, though! I would say it’s an expansive narrative, with most of the barriers getting broken down, though I can’t say how without giving a bunch of spoilers).
However, I’ve had to do more planning with certain other manuscripts of mine that are still unpublished, like aligning the chronology for a fantasy manuscript with a great many characters, or tightly mapping the plot for another story with a strong element of mystery. And then there’s world-building, but that’s more like a parallel writing process, a book beneath the book, rather than a planning process.
In any case, Dase, my protagonist, would like to remind me that when we’re offered limited options, there’s always another choice.
2. What inspired the book?
Hopefully it’s not for distraction, not an opiate. For me it’s an effort to give the world a chance, to make it through this catastrophe and to grow back in a healthier way. That’s at least part of why I’m channelling these stories, I think. Also, as an act of defiant hope: if the world were going to end tomorrow, today I’d plant a tree, that sort of thing.
7. I like to end my Q&As with the same question so here we go. During all the Q&As and interviews you’ve done what question have you not been asked that you wish had been asked – and what’s the answer?
When Dase finds an old news article behind the wall panel of their module–an article from a different world–everything starts to unravel. Who’s going to believe Dase, when everyone knows they’re a little crazy? And who is even in charge of Hermetica? In a universe of total surveillance and parallel worlds, consensus reality isn’t what you think.
I knew not to expect the publishing industry to be some pure temple of literary passions, but even with my cynicism, my critical take, I was surprised at times to find amidst all the bureaucracy, all the monopolization, the marketing, the imperative of the bottom line, how frequently the story itself was absent from the entire process of publishing.
5. What do you do when you aren’t writing? What do you do to relax and get away from it all?
Going with a small publisher was a much nicer experience, and I hope to be surprised by our ability to distribute the book despite the game being, in many ways, rigged. Crossing my fingers.
I like to paint the town red, light fires, spark processes of creativity. I like to travel and share with strangers. I love to walk in the mountains, in the woods. I love to cook for friends. Garden. There might be a cat who owns a good piece of my time.
1. Tell us a little about Hermetica.
I go on long walks and parts of the manuscript come to me almost intact, and as I’m writing more parts reveal themselves. As a result, my editing process rarely leads to big structural changes, it’s much more about fine-tuning the diction or adding some more subtle elements to complement or counterbalance the main thrust of the story.
Why are we writing books at the end of the world?
Alan kindly answered a few of my questions.
4. Is there anything about the process of publishing a book that surprised you?
However, Dase’s experience with control and marginalization actually has nothing to do with the pandemic, but with my own lifelong history of madness, of not fitting in with our society’s norms around mental health. Another factor that left its mark on the book are all these figures with immense power in our world who really do not care how many people die as a consequence of their greed and selfishness.
About the Book 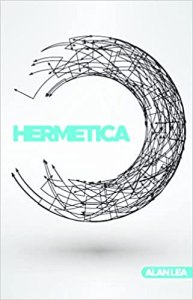