After The Fire is published by Quercus and available in all formats now.
Please support a local bookshop if you can when buying.
Alternatively, you will find buying links for various
retailers on the Quercus website here: After the Fire
Nobody was supposed to get out alive.
Jo Spain is the author of the bestselling Inspector Tom Reynolds series and several international No. 1 bestselling standalone novels, including The Confession and Dirty Little Secrets. Her first book, With Our Blessing, was a finalist in the 2015 Richard and Judy Search for a Bestseller.
Jo lives in Dublin with her husband and four young children.
About the Author
On a Dublin city street, packed with afternoon shoppers, a young woman appears, naked, traumatised and bearing burn marks.
What follows is a fast-paced story taking place over the course of just a few days and its transpires that there are so many issues wrapped up in this one case – gun crime, gang rivalries, corruption, drugs, sex trade and people trafficking. I couldn’t wait to find out what had happened and was taken by surprise when all was finally revealed! This story of Dublin’s dark side is a gripping read with plenty of action, danger and twists.
My thoughts
Regular readers of my blog will know that most of the time I read and review what you might call women’s fiction or romantic fiction, feel-good novels. This has been especially true over the past year. However, I absolutely love Jo Spain’s crime and thriller novels. I definitely couldn’t resist buying myself a copy of After the Fire, her latest Tom Reynolds novel, the sixth in the series. Let’s have a look at what the book is about.
Jo Spain has written an arresting opening scene with the young woman, naked and burnt, walking down a Dublin street. She’s very good at doing that, writing an opening chapter which grabs the attention and draws you immediately into her story. She’s also very good at having so much going on that you just have to keep reading.
Tom Reynolds, now Chief Superintendent, is no longer head of the murder squad. But when it transpires the woman escaped from a house fire started deliberately and that there are more victims, Tom is sucked in. What begins as a straightforward case of arson, soon becomes something much more sinister.
Tom Reynolds is one of my favourite fictional detectives. In After the Fire, he’s been promoted to Chief Superintendent at the National Bureau of Crime investigation. So he’s not really supposed to be involved in the day to day running of the murder squad investigations but Tom being Tom, he gets caught up in this case focussing on those who died in the fire, and those who survived. I have to say I think that his wife is rather long-suffering as his dedication to his work means that she often takes second place. It was good to see newly promoted Inspector Laura Lennon having more prominence in this story as she proves that Tom’s confidence in her abilities was well placed.
Jo, a graduate of Trinity College Dublin, writes TV screenplays full-time. Her first crime series was broadcast on RTE in 2018 and she’s currently involved in a number of TV developments including adaptations of her own novels, in Germany, Britain, Iceland and Finland.

And not everybody will survive the fallout.
The people in that house never wanted to be there in the first place. Now more of them are missing. Tom is faced with a ticking clock as he tries to locate the others and as he does, a terrifying spider’s web of domestic and international crime unfolds.
From the back of the book 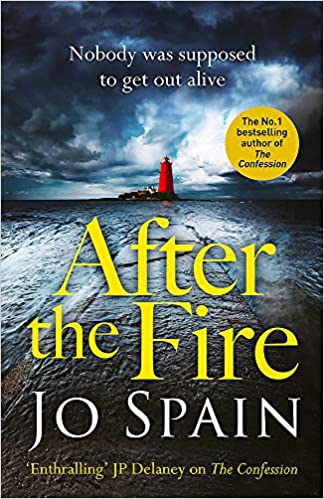