Publication date – 15 April 2021
A Trip of One’s Own is a funny and heartfelt invitation to take that trip: to Paris, to Whitstable, and maybe down that street you’ve always wondered about.
Full of personal anecdotes, and of the emotional turmoil the breakdown in a relationship brings, A Trip of One’s Own feels like a chat between friends, a cathartic release of emotions and a look back at how travel can be a comfort and as well as opening eyes, can make us feel grounded, even 30,000 feet in the air.
When Kate Wills splits from her husband she finds herself adrift. Travel is her income and now it is her escape. But somehow it feels different this time. Used to travelling alone, it is perhaps the realisation that she will return to empty rooms and nobody to greet her that dims the appeal. Needing inspiration she set out to research women travellers throughout history and realises that there were many more than first appeared. Following them on their travels she finds herself in the process.
Each chapter ends with handy tips for travelling alone, from planning in advance to winging it ( it always pays to have the first night booked, to save collapsing in a tired emotional mess half way around the world for example).
In a time when travel is more or less banned for the moment, A Trip of One’s Own is the next best thing. Armchair travel, with it’s alluring descriptions of places not yet visited giving ideas for future travel. It also brought back fond memories of previous trips though thankfully when I wandered around Beijing train station there were plenty of signs in English (trying to ask for a doctor on the Great Wall was another matter entirely). 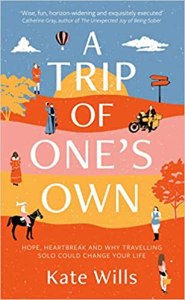 Source – review copy
Published by Blink Publishing
Kate Wills wasn’t expecting to be divorced after less than a year of marriage. She hadn’t anticipated restarting a life that had, for the last 12 years with her partner, seemed so stable. Luckily, her job as a travel journalist offered her the perfect opportunity to escape from it all. But this time, her jet-setting felt different. Kate felt more alone, particularly against a backdrop of never-ending hen dos, weddings and baby showers.
Recommended.
So she began to search history for female travellers to inspire her. From a 4th-century nun to a globe-girdling cyclist, Kate discovers that throughout history, there have been astonishing women who’ve broken free from more burdensome expectations, clearing the path for us to do the same.
The reader follows the author as she in turn follows in the footsteps of female travellers in history. What all of these women have in common that they stretched or broke the boundaries enforced on women through the ages. There’s the 4th Century nun who sets of on a solo (ish, she had helpers) pilgrimage to the holy land to the 19th Century mum who leaves her husband and children in a New York tenement to globe trot, or the woman who motorcycles across Australia in an attempt to leave behind a broken heart.