My review today is of The Collector’s Daughter by Gill Paul. My thanks to the publishers, Avon, for the copy of the book.

Gill also writes historical non-fiction, including A HISTORY OF MEDICINE IN 50 OBJECTS, and she speaks at libraries and literary festivals on subjects ranging from Tutankhamun to the Romanovs.

I thought The Collector’s Daughter was an absolutely wonderful historical fiction read, quietly gripping, totally absorbing and completely fascinating, with a hint of mystery that added an extra dimension to the tender relationship between Evelyn and Brograve.

The Collector’s Daughter tells a fictionalised account of Lady Evelyn’s life and covers the discovery of the tomb, the loss of her beloved father, her marriage to Sir Brograve Beauchamp, and the years running up to the end of her life. I can never resist books like this that bring to life real people and events and Gill Paul has done a phenomenal job with this compelling read. 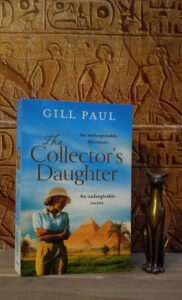 Lady Evelyn Herbert, along with her father, Lord Carnavon and Howard Carter, was one of the first people to enter the tomb of Tutankhamun in 1922, maybe even the very first. Something of a trailblazer, she had always longed to be a lady archaeologist and so her time in Egypt is a dream come true.
Whilst it is a story that would be much more ordinary without Evelyn’s time in Egypt, it’s her romance and subsequent marriage to Brograve that really made this book for me. Essentially it’s a love story and I thought it beautifully imagined on these pages. These two characters were brought to life for me and left me wanting to know more about them (hello Google!). Indeed, the pages at the end, giving more detail about the author’s extensive research and a few photographs were very welcome indeed. I’d deliberately refrained from looking at them whilst I was reading and as everything and everybody was described so well I didn’t really need to, but it was still nice to turn the final page of this fabulous novel and see them there.
Gill Paul is the bestselling author of ten historical novels, many of them describing real women she thinks have been marginalized or misjudged by historians. They include THE COLLECTOR’S DAUGHTER, about Lady Evelyn Herbert, the first person to enter Tutankhamun’s tomb in modern times; JACKIE AND MARIA (retitled THE SECOND MARRIAGE in the UK) about Maria Callas and Jackie Kennedy’s rivalry over Aristotle Onassis; two bestselling novels about the Romanovs – THE SECRET WIFE and THE LOST DAUGHTER – as well as WOMEN AND CHILDREN FIRST, which was shortlisted for the 2013 RNA Epic Novel of the Year award, NO PLACE FOR A LADY, shortlisted for a Love Stories award, and ANOTHER WOMAN’S HUSBAND, about links you might not have suspected between Wallis Simpson and Princess Diana. Her novels have reached the top of the USA Today, Toronto Globe & Mail and kindle charts, and been translated into twenty-one languages.
An unforgettable discovery
In 1922, Lady Evelyn Herbert’s dreams are realised when she is the first to set foot inside the lost tomb of Tutankhamun for over 3,000 years.
A cursed life
But the months after the discovery are marred by tragedy, when Eve’s father dies suddenly and her family is torn in two. Desperate to put the past behind her, Eve retreats into a private life with her new husband.
A deadly choice
But she is harbouring a dark secret about what really happened in Egypt. And when a young woman comes asking questions years later, the happiness Eve has finally found is threatened once more…

I found sense of place to be extremely strong, whether that be in the heat and dust of 1920s Egypt, or the rather less exotic London of the 1970s, interspersed with visits to Highclere, the family seat and now well known as the home of Downton Abbey. Evelyn is visited by an Egyptian academic, determined to track down items that appear to have been taken from the tomb when it was opened, and it is her visits that the author uses to take us back through Eve’s life.
Like Loading…

Gill lives in London, where she is working on her twelfth novel, and she swims daily in an outdoor pond.