After an inconceivably long time away from the UK, one of the first things I wanted to do when back in London was to immerse myself in the city’s thriving literary scene. For what London lacks in both beaches and good weather, it certainly makes up for in boutique bookshops, literary hotels and the sort of scholarly history few other cities can lay claim to. And as one flight, after another, after another, got cancelled, and a three-week sojourn turned into four; and then into five, I took the opportunity to spend the night at one of London’s leading literary hotspots – Hazlitt’s Hotel.
As the early evening rolled into night, we enjoyed a glass of wine in Hazlitt’s library – a cosy room lined with books that boasts a roaring fire and an honesty bar – before venturing out into Soho for supper. Before bed we dunked shortbread biscuits into hot cups of chamomile tea that we ordered to our room, and read under the heavy blankets that adorned the four-poster bed.
Our breakfast arrived shortly thereafter, and we tucked into piping hot cups of coffee, creamy smoked salmon bagels, doughy croissants spread with slabs of salted butter and handfuls of juicy strawberries, as the streets outside started to murmur to life.
Nestled in the heart of the cobbled streets of Soho, and just a stone’s throw from the garden square featured in Dicken’s beloved A Tale of Two Cities, Hazlitt’s Hotel is housed in a former London townhouse, with a discreet entrance, charming historic roots and a labyrinth of rooms spread across four floors. An opulent den of Georgian decadence; the hotel is rich with regal hues, plush furnishings and a wealth of prints, paintings, and charmingly creaky corners.

The afternoon I checked in, it was the sort of perfect winter’s day that made me wonder why I ever left London; the air was cool and crisp; Soho’s many and varied watering holes were teaming with the sound of merriment, and – despite the icy climes – cheerful revellers dotted the tables that lined the surrounding streets of the hotel. Quintessentially British; more like a stately country pile than a city-centre hotel – and unlike anywhere I’ve stayed before – I loved Hazlitt’s slanting walls, heavy drapes; opulent tones and period furniture, and after a quick drink with a friend at The Dog & Duck across the road, I settled in for a leisurely soak in the roll top bath.
Surrounded by Soho’s restaurants and clubs, this upscale boutique hotel occupies a row of Victorian townhouses, and is a 3-minute walk from Oxford Street shopping and Tottenham Court tube station. 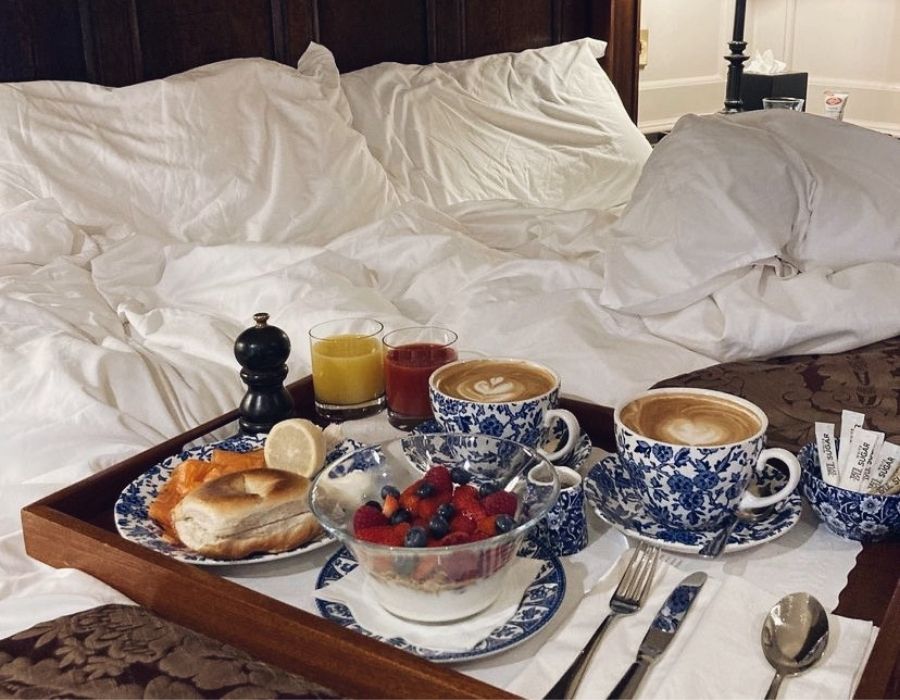 What to read at Hazlitt’s Hotel

Given Hazlitt Hotel’s unrivalled Soho locale, would-be visitors are spoilt for choice should they want to stock up on books during their stay. From Foyle’s flagship store on the bustling Charing Cross Road to the cobbled Cecil Court which is just moments away from Leicester Square and boasts second-hand bookshops and antiquarian booksellers a-plenty, to one of London’s best-loved literary hotspots – Any Amount of Books – there are no shortage of beautiful bookshops within easy reach of Hazlitt’s Hotel. 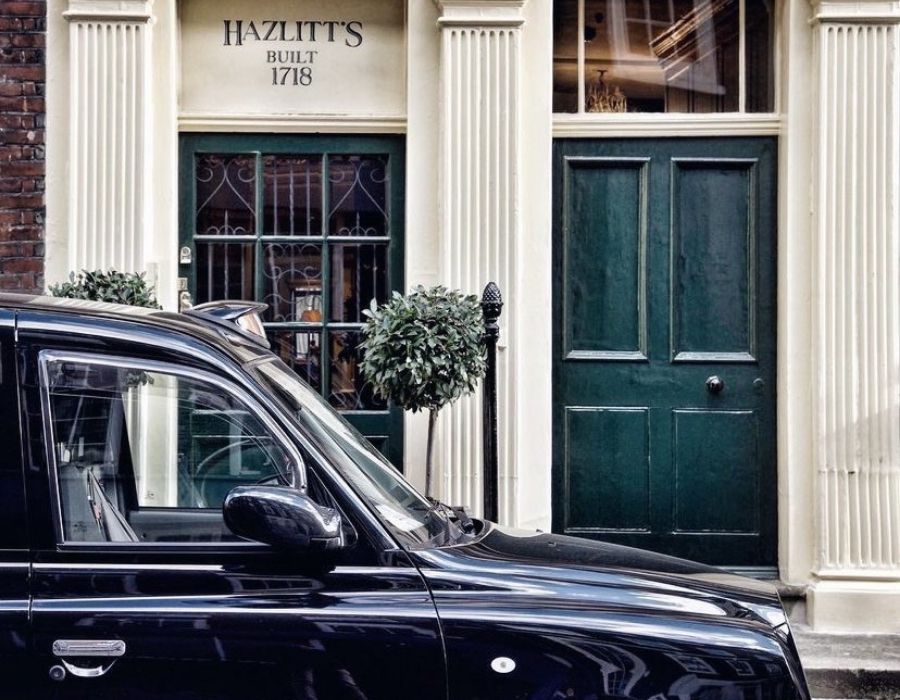 Website: Book direct on their website.
There are few things I love more than tucking into a book set in the place I’m staying; I read many-a California-based tome while I was living in LA; first read Wuthering Heights one blustery night when I was staying at my uncle’s in the remote Yorkshire countryside, and whenever I’m back in the UK I love nothing more than reading books set in the city I once called home. And while Soho is now known for its private clubs, media firms and trendy restaurants, it’s long played its part in both classical and contemporary literature. From Dicken’s beloved A Tale of Two Cities, to Absolute Beginners by Colin MacInnes, to Their Finest Hour and a Half by Lissa Evans, there are a wealth of literary tomes set in the surrounding streets of Hazlitt’s Hotel.
The lavish 18th-century rooms and suites feature antique furniture with carved wooden or 4-poster beds, panelled walls, original fireplaces and bathrooms with period features. All have free WiFi, flat-screen TVs and minibars. Upgraded rooms have iPod docks, and themed suites, with Blu-ray players, include one with a roof garden and a retractable glass roof. There’s 24-hour room service.
As I am wont to do, I woke early the next morning – when the sky outside was still dark and the hustle and bustle of Soho was yet to surface – and, wanting to take advantage of the hotel’s central spot, I set out for an early morning amble around London. Walking through the city’s unusually quiet streets, I strolled towards The Ritz, and wandered through a frost-bitten St James’s Park, before making my way back to Hazzlit’s via Pall Mall and the bright lights of Piccadilly.
Address: 6 Frith St, London W1D 3JA
When it comes to literary London hotels, it doesn’t get much better than Hazlitt’s. Named after William Hazlitt, the 18th-century essayist who lived there, the hotel is spread across three historic Georgian houses, and literature seeps from the very heart of the hotel. From the novel-inspired hotel rooms – named after the likes of Jonathan Swift and Charles Lamb – to the books found in every nook and cranny of the hotel, to the sumptuous library that comes complete with tome upon tome of classic prose, Hazlitt’s truly is a treasure trove for lovers of literature.