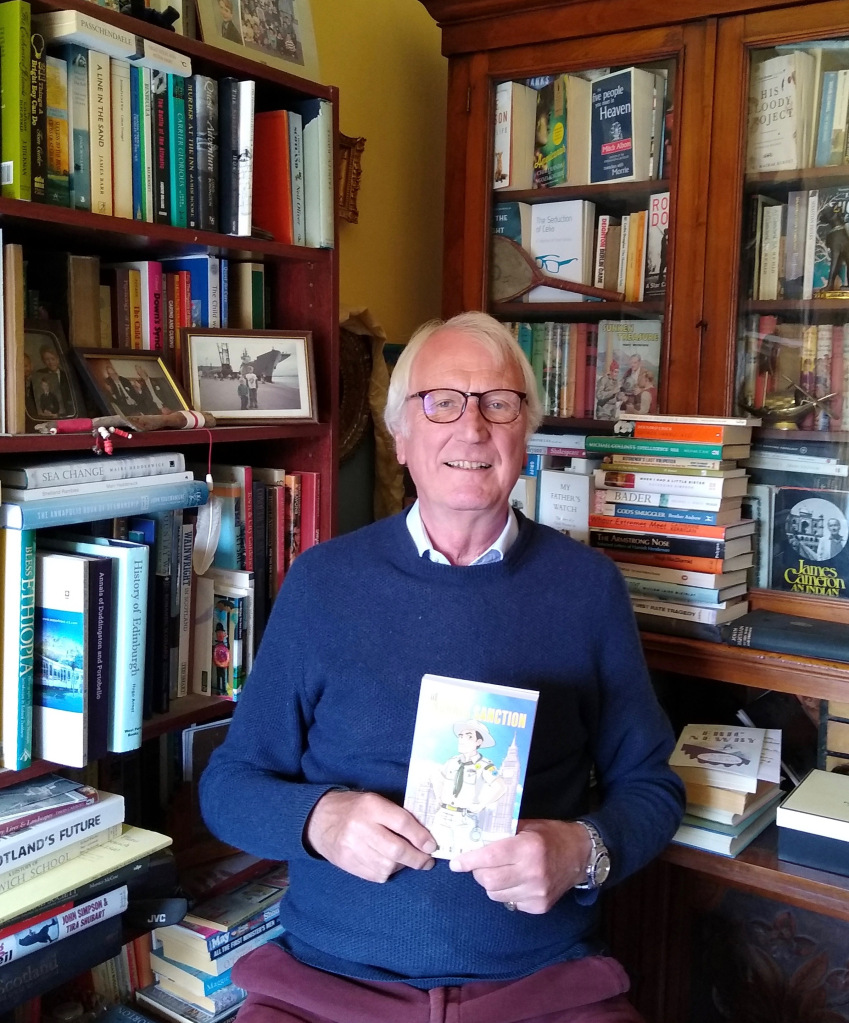 Any of mine!
I am on Facebook, Twitter and Goodreads
And finally, if you could be a character in any book you have read, who would it be and why?
What one book would you recommend to a friend and why?
I’m delighted to welcome local author Grahame Howard to my Author Spotlight today. You may remember I reviewed his book Coda, Fantaisie and an Intermezzo recently and really enjoyed it (review here). Well he has another, rather different, book out right now called The Norris Sanction.
In a nutshell, what is your book about?
How did you come up with the title for your book?
If you were on Desert Island Discs, what one book would you take with you?
What are you reading just now?

Probably Biggles. As a child I would spend my pocket money on Biggles books by W.E. Johns and was enthralled by his adventurers as a pilot in the Royal Flying Corps in WW1. I used to sit in the upper branches of a tree in my back garden wearing a tea towel on my head and pretend to be flying a Sopwith Camel over France. Nothing strange about that, is there?
The fiction market seems to be flooded with serious and troubling stories about all that is wrong in the world so I decided to write a light-hearted tale which would amuse and entertain. Andy Norris is a loser. He is ambition free apart from wanting to check out a game of darts from 170 and seduce Lucy, his flatmate. He is untidy, overweight, badly dressed and lives on fish and chips and beer. In short he is the antithesis to most fictional ‘heroes’. When someone accidentally tries to assassinate him he gets caught up in a police investigation headed by a bowel obsessed chief superintendent and hapless PC Crocker. For convoluted reasons totally beyond his understanding he ends up being part of a sting operation, led by Crocker disguised as a scout leader, to catch the assassin. Set in ’70s London this is the antidote to those who have had an overdose of soul-searching, conscience-pricking stories.
My website is http://www.grahamehoward.co.uk
I published my first book, ‘The Tales of Dod’ in 2010 and subsequently retired early to concentrate on writing. ‘The Norris Sanction’ is my sixth book.
What inspired you to start writing?
Is there a book you’d love to see made into a film?
Do you have a work in progress just now?
1953 was an exciting year. There was the coronation of Queen Elizabeth the second, Hillary and Tensing climbed Everest and I was born in a nursing home somewhere in Chiswick. My family moved to Norwich when I was four where I was educated – or as my father preferred to say – schooled. I returned to London to study Medicine at St Thomas’ Hospital and after junior doctor posts in London and Cambridge in 1986 I was appointed to a consultant post in Edinburgh where I have remained ever since.
The Norris Sanction is published by Austin Macauley and available now.
You can order directly from the publisher’s website here: The Norris Sanction

I belong to a bookclub and we are reading ‘Just Kids’ by Patti Smith.
Initially I wanted to document some humorous stories about my father, a mildly eccentric man who elevated beer drinking to an art form. A man, a bit like Mr Pooter, to whom things happened without apparent rhyme or reason, a man who sailed gracefully through life largely oblivious to what was going on around him.

My editor and I grew to like a number of the characters in ‘The Norris Sanction’ so there are two more books featuring Norris and friends, ‘A girl Called Crocker’, and ‘Seeking Fleur.’ If this book is well received I will publish them.
How can people follow you or connect with you on social media?

Thanks for joining me today Grahame. First of all, would you tell my blog readers a little about yourself?
One book I keep returning to and which would keep me interested for however many years I was marooned, is Robert Graves’, ‘The Greek Myths.’ I am fascinated by these tales which incidentally are so violent they make most modern stories seem tame by comparison.
‘The Eiger Sanction’ was a film starring Clint Eastwood about an assassination attempt on the Swiss mountain and it struck me that ‘The Norris Sanction’ was the perfect title for a humorous story about a local loser living near Clapham Common.
My first book was edited and published by the late Gordon Booth of Bellfield Press. Subsequently I have tried various different methods of publication.
Tell me about your journey to publication
How did you celebrate publication day?
Probably ‘The Clicking of Cuthbert’ by PG Wodehouse. I have had my copy since the 1960s when I ‘borrowed’ it from the school library. I must have read it dozens of times and it always cheers me up on the rare occasions I need a lift.

Couldn’t book a table in a pub because of lockdown so will raise a glass or ten at home. 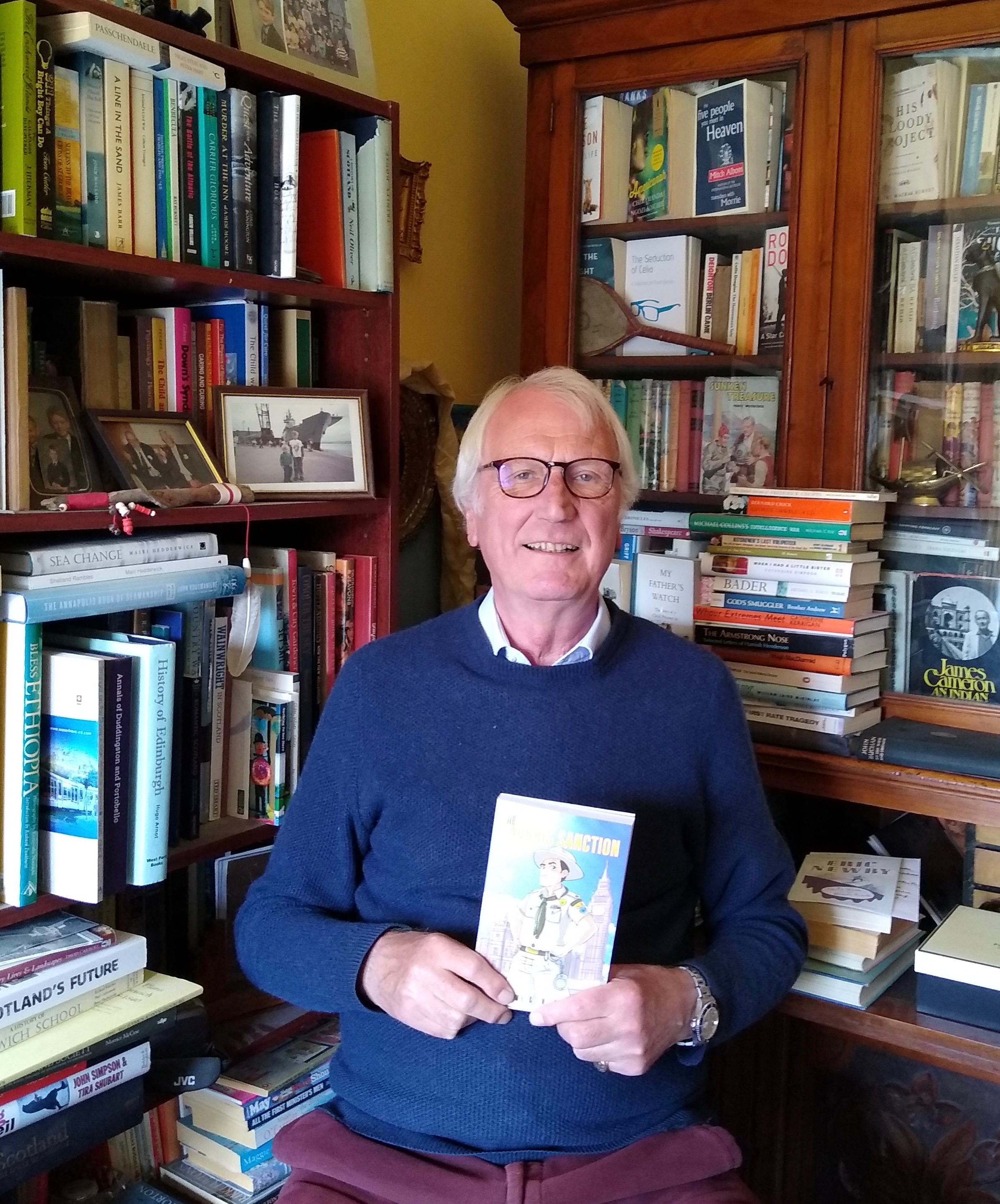