About the Book
Stuart Atkinson’s book A Ladybird Book: The Solar System was published by Ladybird on 5 August 2021. It was illustrated by Brave the Woods.
Stuart kindly answered a few of my questions.
3. Are you a plan, plan, plan writer or do you sit down and see where the words take you?
1. Tell us a little about The Solar System.
4. Having been through the publishing process before, is there anything that still surprises you about publishing a book?
Oh that’s a great question! I think it would have to be “You love space, so how come you never became an astronaut yourself?” The answer would come in two honest parts – a) I didn’t work hard enough at school when I was a teenager to make that a possibility, and b) when I was younger than that becoming an astronaut really wasn’t a realistic career for a shy, awkward, bullied, ginger-haired kid from the north of England. I absolutely hated maths and physics (both subjects today’s astronauts have to be pretty good at) when I was at secondary and then grammar school, and just stumbled through them as best I could, passing exams by the skin of my teeth. All through school I loved English, learning how to use words and language, and I think I probably resented what I saw as “wasting time” on maths etc. Maybe if I’d applied myself more – and, yes, had more understanding teachers – I’d have done better and taken a different path. I’ll never know. But I think that long before then I’d come to the realisation that I would not grow up to be a spaceman. In those days astronauts were all chisel-jawed fighter pilots and test pilots, with buzz cuts and nerves of steel, and they were all American too; there was no way a shy, pale-faced ginger kid who watched Doctor Who from behind the sofa and got bullied at school because he was sent out of the house in a tie, a yellow short and brown trousers was ever going to ride a rocket to the Moon. So now I write about space, and give talks in schools about it, and in that way try to inspire today’s versions of me, to help them see that if they work hard enough, and really set their hearts on doing it, they could go into space one day.
5. What do you do when you aren’t writing? What do you do to relax and get away from it all?
6. If you could only read one book for the rest of your life which book would it be?
It would be a science fiction novel by American writer Kim Stanley Robinson, called “Red Mars”. It’s the first novel in a trilogy telling the story of how Mars is colonised in the future and ‘terraformed’ to make it more like Earth, with lakes and seas, rain and breathable air. The first time I read it, and was swept away by its wonderful descriptions of Mars and its landscapes, it literally changed my life. It opened my eyes to how science could be written about poetically and beautifully, not just boringly and stuffily, so now I try to write that way too. I re-read “Red Mars” every couple of years and never get bored with it.
Thanks for asking me these brilliant questions! 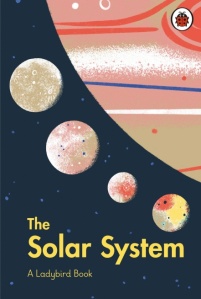 “The Solar System” is a Ladybird book which is a beautifully illustrated guide to the planets, moons and other amazing things that go around our Sun. Ladybird are updating many of their classic information books, which many of your readers will be familiar with and probably grew up with, so I was thrilled to be offered the chance to write this one. The artwork is quite stylised compared to the artwork featured in other astronomy books but it’s absolutely lovely, retro and modern at the same time.
The Solar System takes readers on a journey from the Earth’s surface, through the atmosphere and out into space as you travel from centre of the universe to discover the stars, planets, moons and comets that call our solar system home.
2. What inspired the book? Why the Solar System?
When I’m not writing I work as a Support Worker in a care home for the elderly, which is a very different world to the writing world as you can imagine. Because of the Covid pandemic the past couple of years there have been very difficult and often upsetting, but it’s kept me grounded and helped me enjoy my writing more, I think. To relax I go away a lot in a caravan with my very supportive partner, Stella, and our rescue cat, Jess. We often go to very dark, out of the way places where the stars aren’t drowned out by light pollution. If the weather is kind I stargaze through the night and then write during the day – if Jess lets me, she’s very jealous when my laptop comes out, and will sometimes just close the lid with her paw if she’s feeling ignored..!
You absolutely have to plan a science reference book like this, making sure you plan how to combine all the essential facts and figures, the (a little bit boring!) statistical stuff with information about their history and discoveries scientists have made about them. I write fiction too, and I also plan that out quite carefully before starting, but I find that as soon as I start writing the characters take on lives of their own and go off and do things I hadn’t got planned for them, which is usually great but sometimes writes me into a corner when it ruins the plot! But that’s all part of the fun…right..?
7. I like to end my Q&As with the same question so here we go. During all the Q&As and interviews you’ve done what question have you not been asked that you wish had been asked – and what’s the answer?
Looking up at the sky on a clear night, you might see shining stars, a bright moon and mysterious coloured dots but there many more secrets hiding out in space.
Two things really – how long it takes to get anything done once you’ve started on a project, but also how hard it is to get feedback from people when you’re initially submitting pitches and proposals. Rejections are a part of the writing process, everyone knows that, and learns to live with it… eventually… but when emails and enquiries just go unanswered, which happens a lot, that’s hard, because you have no idea what the problem was and can’t learn anything from that to help you do better next time. Personally I’d rather be told “Your idea was rubbish! There’s no way we could publish that!” than just hear nothing at all.
Well, there was no real inspiration, no “light bulb moment” because I was offered the chance to write it by Ladybird. I’d been doing some editing and consultancy work for them – checking manuscripts and projects for accuracy, etc – and when they asked me if I’d be interested in writing “The Solar System” I didn’t have to think very long! It’s a cliché, I know, but it’s a dream come true having a Ladybird book with my name on it. As a space mad kid at junior school I used to hide behind the curtains in the library at break times, devouring the space and science books it had, instead of playing outside. I was thrown out usually, but sometimes I was allowed to just stay there and read the books. I remember reading Ladybird books there, and now I’ve written one of my own, so it’s wonderful!