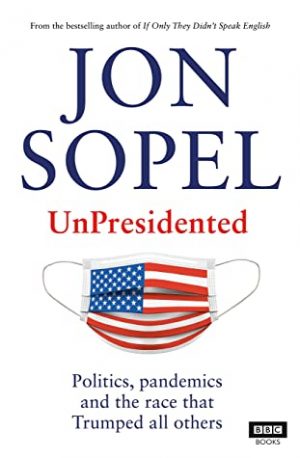 ABOUT THE AUTHOR
As an avid viewer of the West Wing which was a fictional drama of life in the White House set in the late 90s early 2000s,  it is ironic that many of the story lines from the real life Trump administration would have been cast aside with disdain if used in fiction. Who would have pitched a storyline set during a global pandemic where the President would have given credibility to ingesting bleach as a cure to avoiding a virus.
’26 February, White House Briefing Room
Due to publishing timescales the last diary entry is 7 November 2020. As predicted at the outset Trump has never conceded he lost the election and maintains it was stolen from him. In view of the events at the Capitol, and second impeachment, there is more to say. Jon tells me that to just add another chapter would not be sufficient.
In UnPresidented: Politics, pandemics and the race that Trumped all others, BBC North America Editor Jon Sopel presents a diary of an election like we’ve never quite seen before.
Sopel has not interviewed Trump, but his network of “sources” gets you as close as most journalists will ever get. With his BBC career starting at Radio Solent in 1983, he has now found himself one of the few journalists to fly on Air Force one as part of the elite press pool following the President. The life of a reporter sounds exciting, exhilarating, exhausting and for Sopel covering the presidential campaign did not disappoint. If you ever perceived politics to be boring and not for you, this book is witty, but gives a well-informed analysis of the wider politics. If it had been made for broadcast it truly fulfils the BBC’s remit as a public broadcaster to “ inform, educate and entertain”.

The coronavirus feels like it is changing everything. Suddenly it’s not just a public health emergency; it has the potential to upend this whole election…’

Author Links:
The book is written in diary format which initially I found a slight distraction. Having conditioned my mind that they were just short chapters, I soon got into the rhythm and style. As ever Sopel is wry, observational and journalistic. He takes the reader through the 2020 Presidential election campaign, how Covid was handled, and the rise of “Black Lives Matter”.
Unprecedented for Jon is to give us an insight into his family life, and how he personally coped with lockdown under Covid with family split between Washington, London and Australia. Travelling to and from America also highlights his apparent importance to America’s national interests . I will let Jon try and explain that.
It appears his time in the States is coming to an end. Apparently he will miss the sunshine and looks less favourably on the grey clouds of the UK. Often in life it is what you don’t say, or can’t at the time. I sense there are many more stories – many to “tell your grandchildren about at the fireside”, or possibly some unfinished business with a final book.
Fear and loathing on the 2020 campaign trail…
Jon Sopel has been the BBC’s North America Editor since 2014. As a BBC presenter of 16 years, Jon has worked variously as the corporation’s Paris Correspondent, Chief Political Correspondent, hosted both The Politics Show and Newsnight and is a regular on HARDtalk, as well as a number of Radio 4 programmes. As North America Editor, Jon has covered the 2016 election at first hand, reporting for the BBC across TV, radio, and online – accompanying President Obama on Air Force One and interviewing him at the White House. He has travelled extensively across the US and recently rode a Harley Davidson down the West Coast (that wasn’t for work though). He lives in Washington and London.
Experience life as a reporter on the campaign trail, as the election heats up and a global pandemic slowly sweeps in. As American lives are lost at a devastating rate, the presidential race becomes a battle for the very soul of the nation – challenging not just the Trump presidency, but the very institutions of American democracy itself.
Today I have another non-fiction guest review from my OH who has either read/listened to the audio of all 3 books by Jon Sopel and has provided a review of the third book UnPresidented. We have both enjoyed watching Jon Sopel talking at online events – most recently when he did an interview with Griffin Books. His talks are always very entertaining and interesting – if you get the chance to watch in future, I definitely recommend.
In this highly personal account of reporting on America in 2020, Jon Sopel takes you behind the scenes of a White House in crisis and an election in turmoil, expertly laying bare the real story of the presidential campaign in a panoramic account of an election and a year like no other.

In a recent event promoting UnPresidented Jon Sopel compares his coverage between Trump and now Biden as to “being on “crack” each day, but is now holding 1/2 pint of shandy”. That neatly sums up Jon’s dry humour who now completes a trilogy of books about Trump and his journey to the White House and loss of the 2020 presidential campaign.
REVIEW