True crime podcaster Elle Castillo has long been obsessed with The Countdown Killer.
Elle must stop the deadly countdown before the killer can claim his next victim
Elle Castillo is a podcaster focusing on the victims of unsolved crimes. Her latest series looks at The Countdown Killer who, 20 years earlier, started to kill women, counting down in age from 20 backwards. Those murders came to an abrupt stop but Elle is bringing a new interest to the case and her investigations are leading her to wonder if TCK is back.

This book is so fast-paced but also a book that I needed to concentrate carefully on. That’s not a criticism, it’s just the kind of book that I didn’t want to miss a moment or detail of. It had me turning amateur detective, suspecting everyone, right up to the very tense finale. Throw in a couple of cunning twists in the tale and this book was quite the ride.
VICTIMS

Amy Suiter Clarke is a writer and communications specialist. Originally from a small town in Minnesota, she completed an undergraduate in theater in the Twin Cities. She then moved to London and earned an MFA in Creative Writing with Publishing at Kingston University. She currently works for a university library in Melbourne, Australia. Girl, 11 is her debut novel and will be published by Houghton Mifflin Harcourt in the USA, Text Publishing in Australia, and other publishing houses all over the world in 2021.

VENGEANCE
Girl, 11 is a thrilling and disturbing tale of a twisted serial killer and the woman who fully intends to bring him down. It felt so original and inventive. If you like podcasts, true crime, or simply exciting and addictive thrillers then this is one for you.

Twenty years ago, he went on a killing spree. Each new victim was a year younger than the last.
I’m sharing my thoughts about the fantastic Girl, 11 by Amy Suiter Clarke today on paperback publication day. My thanks to Poppy Stimpson from Pushkin Vertigo for the proof copy of the book.

Isn’t it a fantastic idea for a book? The podcast is ‘aired’ in between chapters where we follow Elle in her investigations and I thought it was a really clever way of telling the story, interlinking events of the past and what’s unfolding in the present. The podcasts consist of Elle’s voiceovers and also her interviews with key people such as cops, medical examiners and people linked to the victims. I loved Elle who is courageous and smart. I could see one of her future podcasts maybe making it into book form too. I’d love to see more of her. 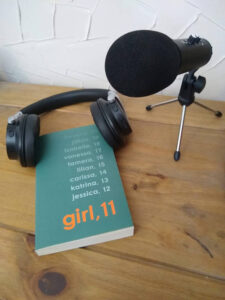 Podcasts have risen so much in popularity lately and when I saw that Girl, 11 featured a true-crime podcaster investigating a serial killer I was hooked on the premise. Did the book live up to the premise? Most certainly it did. I thought it was a brilliant read.