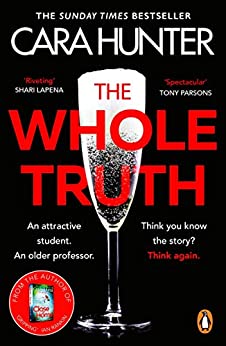 Soon DI Fawley and his team are up against the clock to figure out the truth. What they don’t realise is that someone is watching.

ABOUT THE AUTHOR
The first thing you come to in the book are brief character summaries of the key members of the team – this is so useful, especially when there is a long gap between books and I do wish publishers would do this more often with a series.
And they have a plan to put Fawley out of action for good…
Because this time, the predator is a woman and the shining star of the department, and the student a six-foot male rugby player.

When an Oxford student accuses one of the university’s professors of sexual assault, DI Adam Fawley’s team think they’ve heard it all before. But they couldn’t be more wrong.
My thanks to Ellie of Penguin for the tour invite and copy to review. I love this series, the previous books are reviewed here on the blog, and I was delighted to be asked to review the next one. I have to admit there was some trepidation before starting this – Adam Fawley is one of my favourite book detectives after all and I had a feeling that things were not going to go well for him in this book. Also I have to say congratulations to Cara for The Whole Truth being one of Richard & Judy’s Book Club Spring 2021 picks.
Think you know the story? Think again.
Quinn and DC Verity Everett are called out to the Edith Launceleve College in Oxford, where it seems that a complaint has been made of sexual assault against a member of the teaching staff, a professor. However all is not quite what it seems and this is just one part of a story that has more twists and turns than a rollercoaster.
As with previous books, the story is told with snippets of social media posts, police reports, newspaper articles and this time features podcast transcripts. Some of these are in a different font and occasionally can be rather hard to read, but they are a feature of this series and it does give a relevant feel to the story.
MY THOUGHTS
Cara Hunter is the author of the Sunday Times bestselling crime novels Close to Home, In the Dark, No Way Out and All the Rage, all featuring DI Adam Fawley and his Oxford-based police team. Close to Home was a Richard and Judy Book Club pick and was shortlisted for Crime Book of the Year in the British Book Awards 2019. No Way Out was selected by the Sunday Times as one of the 100 best crime novels since 1945. Cara’s novels have sold more than a million copies worldwide, and the TV rights to the series have now been acquired by the Fremantle group. She lives in Oxford, on a street not unlike those featured in her books.
Another strand to the story is one that follows on from the end of the previous book ‘All The Rage‘. This concerns Fawley and his heavily pregnant wife Alex. A case from the past is casting shadows on what should be a happy time for them and there is plenty of tension and plot twists as they both navigate their way through this turbulent time.
One final thing. Dave King, I hate you and I wish that coffee had been hotter!

It’s rather a shame that “safe pair of hands” DS Chris Gislingham is on holiday for much of the book and the demoted DC Gareth Quinn is Acting DS in his absence. Fawley describes him as “sharp suit and blunt razor” which I think sums him up perfectly. His general attitude doesn’t always serve him well, particularly in this case which calls for some sensitive handling and he is frequently called out on it.

I don’t want to give away detail or spoilers but I very much enjoyed this latest instalment and in my opinion it’s probably the best one yet. Nothing is as it first appears and the author cleverly weaves a tense narrative with plot twists and suspicion to form a gripping story of revenge and retribution. I particularly enjoy the character development within Fawley’s team which gets better with each book. It is possible to read this on its own although you would be missing out on a lot of back story and to be honest when its such a good series, why wouldn’t you start from the beginning. She has everything at stake; he has everything to lose. But one of them is lying, all the same.