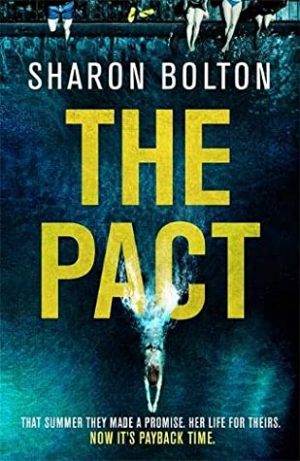 Let the games begin . . .
MY THOUGHTS
It probably says a lot about me that I quite enjoyed seeing some of them under pressure after the way they had behaved, although I have to admit some of Megan’s demands did seem rather shocking and at times I thought she went too far. I veered between feeling sorry for her and thinking her deranged. It’s Part 2 of the story that has the real psychological thriller vibe and it turns into a game of cat and mouse with the reader wondering who will be the victor.
These unlikeable teenagers grew up to be mostly unlikeable adults – all had made a success of their life except for one. The one who took the wrap. But now she’s back and its payback time. A brilliant read, with a dramatic conclusion that was anything but predictable. Definitely recommended.

Sharon lives near Oxford with her husband and son.
Publisher: Trapeze
Format: Ebook, Audio, Hardback (27 May 2021) | Paperback (14 October 2021)
384 pages
Source: Copy received for review
18-year-old Megan takes the blame, leaving the others free to get on with their lives. In return, they each agree to a ‘favour’, payable on her release from prison.

Sharon Bolton (previously S. J. Bolton) is the critically acclaimed author of some of the most bone-chilling crime books ever written. She has been shortlisted for the CWA Gold Dagger for Crime Novel of the Year and the Theakstons Old Peculier Crime Novel of the Year. In 2014 she won the CWA Dagger in the Library for her whole body of work.
Twenty years later Megan is free.
Oh my, I really did enjoy this.  A story featuring some very arrogant and entitled young people from a privileged background, that just for the fun of it, carry out a dare that goes tragically wrong. Whilst they argue about who should take responsibility with no-one prepared to, one of the group steps up to take the blame and the others readily agree to the condition imposed. Anything that gets them off the hook.AUTHOR LINKS:

There was so much to enjoy about this story. Mainly set in Oxford, with some vivid imagery of the location for a real sense of place, it has a gripping and twisted storyline with excellent plotting. Characters that it was easy to dislike for their selfishness – mostly they had not given a second thought to Megan over the years, despite their promises to keep in touch and just had carried on with their lives and doing very well for themselves – their careers ranging from being a junior minister to a millionaire industrialist, although it was clear that one person in particular was still haunted by events.  No-one thought to ask why she took the blame that night, they were so young and self-absorbed.

My thanks to Tracy Fenton of Compulsive Readers for the tour invitation and to the publisher for the copy to review.
A golden summer, and six talented friends are looking forward to the brightest of futures – until a daredevil game goes horribly wrong, and a woman and two children are killed. ABOUT THE AUTHOR