The premise of the story is one of meeting the right person but at the wrong time. Albert is from an aristocratic family whilst Violet is from a working class family in Abergavenney, and in each of the different times they have different problems to face such as how Violet can fit in with Albert’s family and vice versa, Violet’s need for her life to mean something in a time when a woman’s role was in the home, and so on.

Although not quite the intense, love against the odds, romance I thought it might be, I enjoyed this cleverly written book. It’s a social commentary covering some of the important times of the twentieth century such as the years after the Second World War, feminism and free love, and protests and New Labour. I thought Williams did a great job of portraying the difficulties that Violet and Albert had in making their relationship work (or not) against a backdrop of expectation, both societal and familial.

Two people.
Together, they are electric and the world is glittering with possibility. But against the shifting times of each era, Violet and Albert must overcome differences in class, gender, privilege and ambition. Each time their lives entwine, it will change everything.

One moment is all it takes…
As their eyes first meet, for a split-second it’s as if the clocks have stopped. Nothing else matters. Yet whichever decade brings them together, Violet and Albert are soon forced to question: what if they met the right person at the wrong time?

It’s my stop on the bookstagram/blog tour for What Time is Love? by Holly Williams today. My thanks to Alainna Hadjigeorgiou from Orion for the gorgeous review copy and for the place on the tour. It’s also publication day so What Time is Love? is now available in hardcover, eBook and audiobook.
Holly Williams is a journalist and worked for The Independent for six years. She has written for many publications including The New York Times, The FT, The Telegraph, The i newspaper, ELLE, and the BBC, as well as returning to The Independent to edit its arts section. She is currently a theatre critic for Time Out and The Mail on Sunday, and a book reviewer for The Observer and The TLS. She was born in Wales and currently lives in Sheffield. What Time Is Love? is her first novel.
What Time is Love is a great ‘what if’ type of story that really made me think what the trajectory my life would have taken had I been born in a different era. It’s an unusual and inventive concept, almost like three completely separate stories, each featuring the same people but living a complete other life. I was rooting for Albert and Violet and hoping that one of their stories would turn out to be the right one at the right time for both of them. This is an accomplished debut and I’m looking forward to seeing what Williams comes up with next.

A sweeping, nostalgic and dazzlingly immersive love story, perfect for fans of The Versions of Us by Laura Barnett, Miss You by Kate Eberlen and Normal People by Sally Rooney. 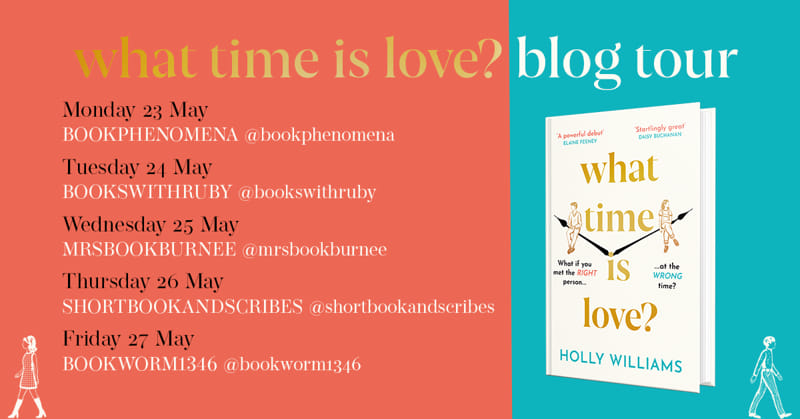 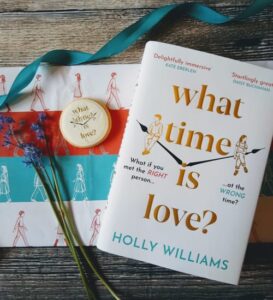 I love books that play around with time. What Time is Love, the debut novel by Holly Williams, follows Albert and Violet over the course of three different decades. This is no ordinary story though. They meet in 1947, 1967 and 1987 and each time they are 20.

Three decades.
Over the years, Violet and Albert’s lives collide again and again: beneath Oxford’s spires, on the rolling hills around Abergavenny, in stately homes and in feminist squats. And as each decade ends, a new love story begins…